Collective memory and memorialization are, in many ways, the bread and butter of those who build and legitimize states. In the era of the nation-State, significant shared experiences and the invention of tradition – to paraphrase Eric Hobsbawm[1] – based on these events are among the state’s core tools for building patriotic feeling, solidarity and social cohesion. For the former members of the USSR, the experiences instrumentalized are often within living memory. In the late 1980s and early 1990s, social unrest, civil disobedience and open hostilities created the perfect storm for the collapse of the Soviet system and the dissolution of the Union, giving rise to 16 new states from the Baltic Sea to the Bering Strait. In many of the capitals, confrontations between unarmed protestors and heavily armed soldiers were the catalysts for the end of Moscow’s sovereignty. This is certainly true for Kazakhstan in December 1986 and Latvia, Lithuania and Estonia in 1989. It is also very much the case for Azerbaijan, as a pamphlet commemorating the events of 19-20 January 1990 demonstrates. 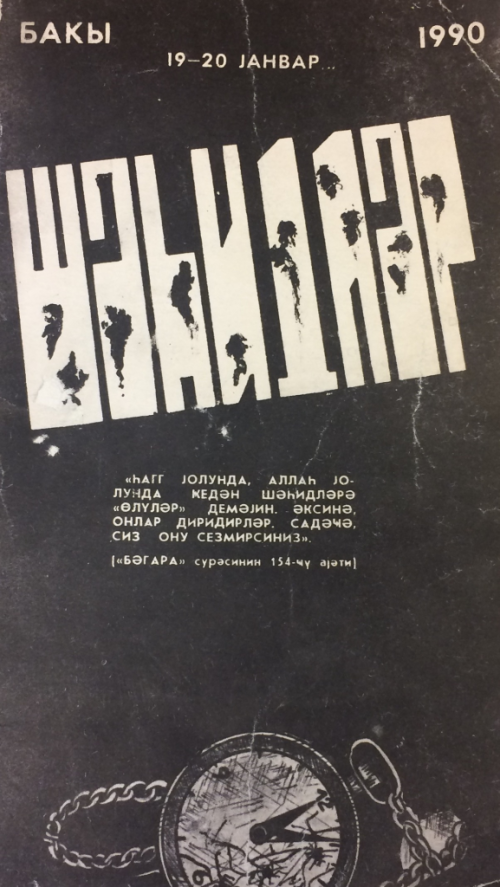 Black January (Qara Yanvar), as the events of 19-20 January 1990 are known in Azerbaijan, occurred when Soviet troops bloodily repressed anti-government demonstrations in Baku. Moscow claimed that it was acting to quell nationalist passions following a flare-up of violence against Armenians in the country, as well as attempts at overthrowing the government of Soviet Azerbaijan. Whatever the reasons for the protests and the ensuing violence, between 133 and 137 people lost their lives on the two days. They are remembered today in the Memorial for Black January, erected in 2010, as well as in countless publications. 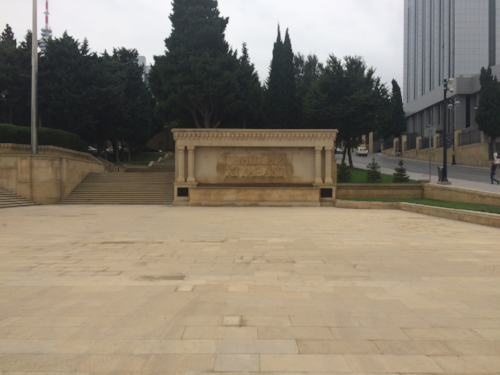 The British Library’s Turkic Collections contain one such pamphlet, entitled Шәһидләр (Şəhidlər, Martyrs), 10,000 copies of which were published in 1990 or 1991. The pamphlet is printed in black and white, with the cover type white against a black background. The symbolism of the colour scheme and the starkness of the type and arrangement are obvious, but even more interesting is the quotation that accompanies the title. It is an Azeri-language translation of Verse 154 of al-Baqarah, the Cow, the second sura of the Qur’ān. The English translation reads: “And do not say about those who are killed in the way of Allah, ‘They are dead.’ Rather, they are alive, but you perceive [them] not.” This overtly religious approach to the victims of state violence marks a distinct and aggressive departure from Soviet orthodoxy regarding the place of religion in public life. 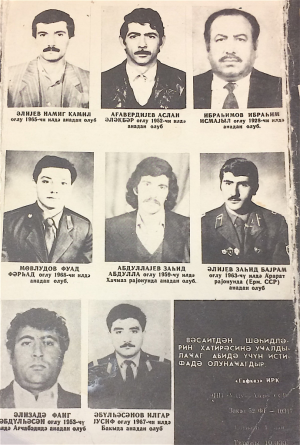 Portraits of the victims and final inscription, Gafkaz IRK, Şəhidlər

Such piety begs the question of just whom the pamphlet commemorates. The Qur’anic quotation makes specific mention of “those who die in the way of Allah” (مَن يُقتَلُ فِي سَبِيلِ اللهِ); does this include non-Muslim victims of repression in the category of “Martyrs”? The answer appears to be no, given a brief overview of the photographs on the interior of the pamphlet. Although it is impossible to determine the self-identification of the victims and their relationship to Islam, a brief glance through the names associated to the images reveals that only those with non-Russian or non-Armenian surnames find their way among the Martyrs. It is obvious that there are fewer pictures in the pamphlet than the 133 or 137 deaths reported. Some are evidently unknown victims whose graves in Martyrs’ Alley are marked as Nǝmalum, or “Unknown”. Nonetheless, there are also individuals, such as Vera Lvovna Bessantina, whose image adorns the wall of Martyrs’ Alley, but not the collection of photographs of Şəhidlər. 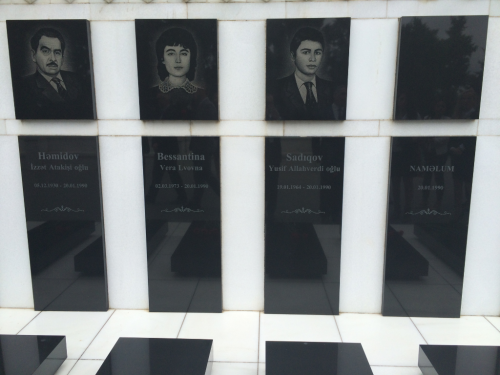 The final page of the pamphlet informs us that “Use shall be made of the aid for a monument honouring the memory of the martyrs.” It is unclear whether the monument constructed in Martyrs’ Alley is the direct result of the campaign that this pamphlet was a part of, or if it was the product of a different effort by the public and the state. What is clear is that the Azerbaijani State’s commitment to multiculturalism and religious tolerance is manifest in the widening of the term Şəhidlər to all those who died in the events of 19-20 January 1990. This pamphlet, however, remains as a reminder of the raw and often uncontrolled approaches to religion, dissidence and the state that characterized the late 1980s and early 1990s, during the chaotic and messy transition from Soviet hegemony to national sovereignty.

Posted by Ursula Sims-Williams at 1:00 AM in Middle East , Slavonic | Permalink