This guest post by Katherine Butler Schofield accompanies the podcast “The Maestro: Remembering Khushhal Khan Gunasamudra in Eighteenth-Century Delhi”, the second of six lectures and conversations she is presenting at the British Library in 2018 as part of her British Academy Mid-Career Fellowship “Histories of the Ephemeral: Writing on Music in Late Mughal India”. 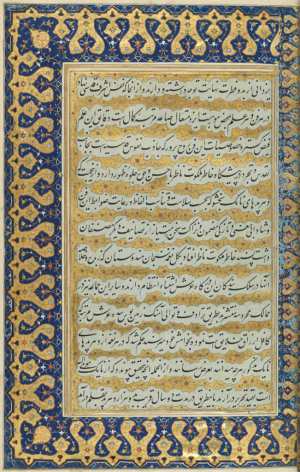 On 12th March 2018 I retold a revealing story about the great seventeenth-century Indian musician Khushhal Khan kalāwant ‘Gunasamudra’, the ‘Ocean of Virtue’. Khushhal Khan was one of the most feted Mughal court musicians of his time. Great-grandson of the most famous Indian musician of them all, Tansen, and chief musician to the Mughal emperors Shah Jahan (r. 1627–58) and Aurangzeb ‘Alamgir (r. 1658–1707), he was written about extensively in his lifetime as a virtuoso classical singer of exceptional merit and serious character. A portrait of him, dressed in pink and singing with other renowned court musicians at the wedding of Dara Shukoh in 1633, may be found in this c.1700 painting in the Royal Collection. In the podcast, I look at this larger-than-life figure from two perspectives. The principal one is a lengthy story that memorialised Khushhal Khan one hundred years after his heyday, as told by Mughal nobleman Inayat Khan ‘Rasikh’ in the first ever stand-alone biographical dictionary (taẕkira) of Hindustani musicians—the Risāla-i Ẕikr-i Mughanniyān-i Hindūstān-i Bihisht-nishīn (1753). 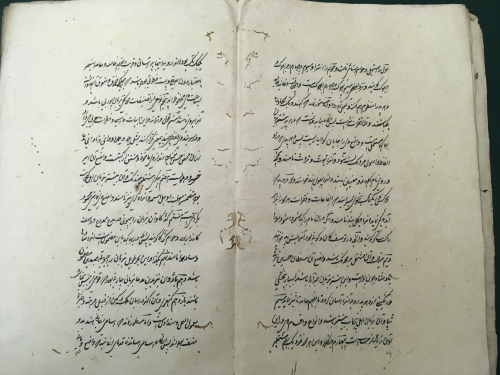 But in order to understand his dramatic tale of Khushhal Khan’s supernatural interference in the 1657–8 Mughal War of Succession between rival princes Dara Shukoh and Aurangzeb, I also delve deep into the canonical Mughal treatises on Hindustani music, which were written in Persian during the reign of Aurangzeb. As well as providing some visuals to accompany the podcast, this guest post allows me to highlight further some of the incredible Mughal writings on Hindustani music held in the British Library.

Of all the arts and sciences cultivated in Mughal India outside poetry, it is music that is by far the best documented. Hundreds of substantial works on music from the Mughal period are still extant, in Sanskrit, Persian, and North Indian vernaculars. Theoretical writing on Indian music began very early, flourishing in Sanskrit from the very first centuries of the Common Era. The first known writings in Persian on Indian music date from the thirteenth century CE, and in vernacular languages from the early sixteenth. These often directly translated Sanskrit theoretical texts. A particularly authoritative model was Sharngadeva’s Saṅgīta-ratnākara, the Ocean of Music, written c. 1210–47 for the Yadava ruler of Devagiri (Daulatabad) in the Deccan. But Persian and vernacular authors added to their Sanskrit models in interesting ways. These two early examples from the British Library’s collections, Figures 3 and 4, offer translations of the Ocean of Music into Persian and Dakhni, but also include large additional sections presenting material contemporary to the times and places in which they were written. The first is the Ghunyat al-Munya or Richness of Desire, the earliest known Persian treatise specifically on Hindustani music, composed in 1375 for the Delhi-sultanate governor of Gujarat. The British Library’s copy is one of only two still extant. 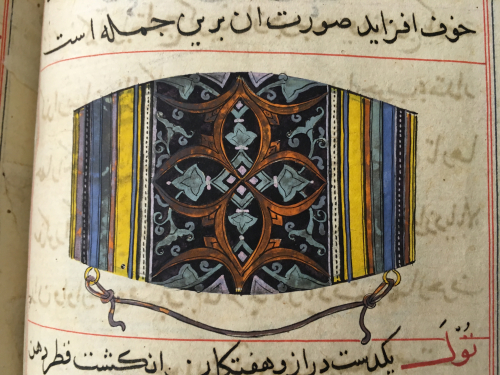 The second is Shaikh ‘Abd al-Karim’s Javāhir al-Mūsīqāt-i Muḥammadī or Jewels of Music, a unique Persian and vernacular manuscript from the ‘Adil Shahi court of Bijapur, at the core of which is what remains of a c.1570 Dakhni translation of the Ocean of Music. (See Part 1  and Part 2 of my earlier discussion of this extraordinary text. See also digital version of this work). The Javāhir gets rid of the Ocean of Music’s outdated way of discussing the rāgas—the all-important melodic frameworks of Hindustani musical performances—and replaces it with a newfangled rāgamālā (‘garland of rāgas’) of peculiar vibrancy and potency. 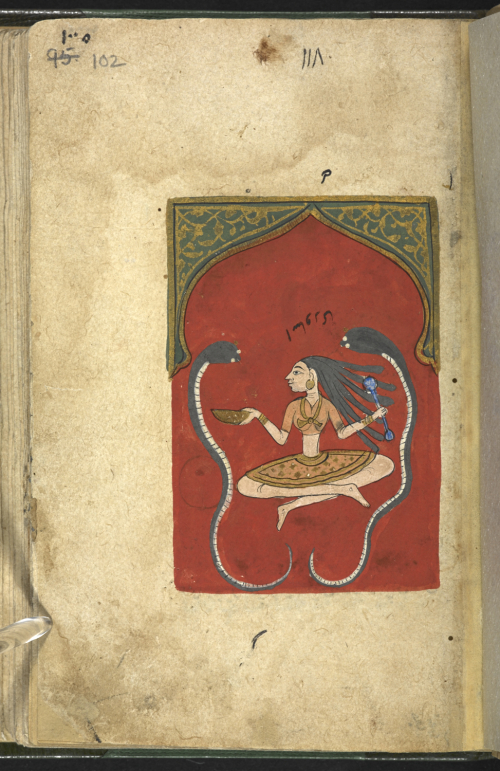 Fig. 4. As well as being melodic frameworks for musical performance, the rāgas were personified and visualised as heroes, heroines, deities, jogis, and other beings with emotional and supernatural powers. Ragini Asavari. Javāhir al-Mūsīqāt-i Muḥammadī (British Library Or.12857, f. 102r)

Sanskrit authors continued to write a variety of musical texts in the Mughal domains. But what’s notable in the seventeenth century is a substantial new effort to recodify and systematise Hindustani music, specifically for the new Mughal era, in more accessible languages. The first major piece of Mughal theoretical writing in Persian on Hindustani music could not be more canonical: the chapters on music and musicians written by Akbar’s great ideologue ‘Abu’l Fazl in his 1593 Ā’īn-i Akbarī (Volume III). What has recently emerged, thanks to the work of Richard David Williams, is that Mughal ventures to recodify Hindustani music seem to have moved from there into classical Hindi, or Brajbhasha, during the reigns of Jahangir and Shah Jahan. Take, for example, Figure 1 above, the well-known Sahasras or Thousand Sentiments, the compilation for Shah Jahan of 1004 dhrupad songs by the early sixteenth-century master-musician, Nayak Bakhshu. Its preface is in Persian, but the songs themselves are in Brajbhasha. 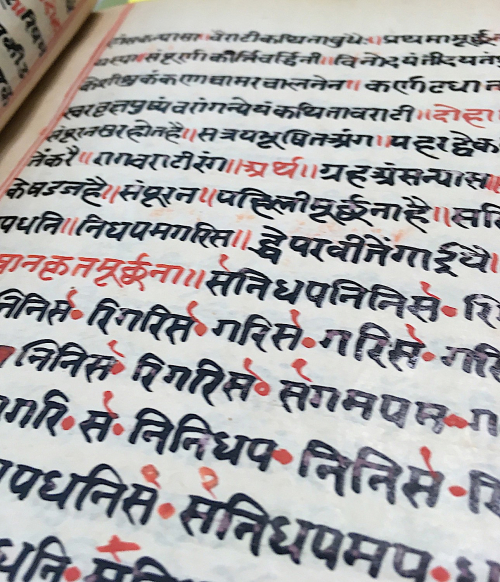 But it was in Aurangzeb’s reign that this recodifying impetus manifested itself in earnest in the Persian language, in a flurry of treatises designed to satisfy the needs of high-ranking connoisseurs of Hindustani music who were more comfortable in the offical language of the Mughal empire[3]. These six key treatises in Persian became the canonical core of Mughal music theory for the next two hundred years:

1) The Miftāḥ al-Sarūd or Key to Music, Figure 6: a translation of a lost Sanskrit work called Bhārata-saṅgīta by Mughal official Qazi Hasan, written for Aurangzeb in 1664 near Daulatabad[4]. Although this treatise is not itself available in the British Library (there is a beautiful 1691 illustrated copy in the Victoria and Albert Museum IS.61:1-197), a précis of it appears in the margins of some copies of the 1547 Persian translation of al-Qazwini’s famous Wonders of Creation. 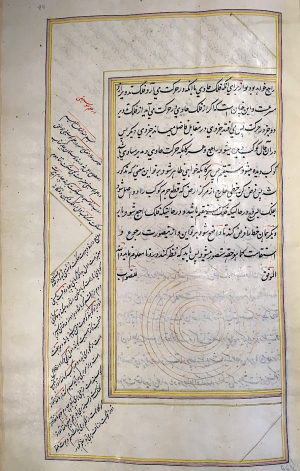 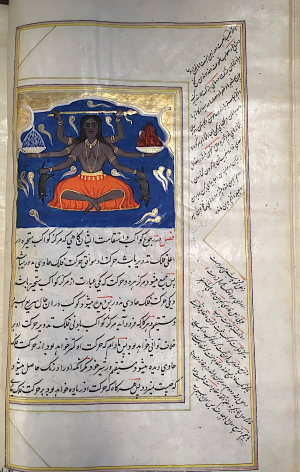 Fig. 6. Précis of Qazi Hasan’s Miftāḥ al-Sarūd in the margins of folio 48r of this nineteenth-century copy of the 1547 Bijapuri Persian translation of al-Qazwini’s Ajā’ib al-Makhlūqāt. On the facing page, a depiction of the planet Saturn (British Library IO Islamic 3243, ff. 47v-48r)

2) The Rāg Darpan or Mirror of Rāga, an original work written in 1666 by high-ranking Mughal nobleman Saif Khan ‘Faqirullah’, completed when he was governor of Kashmir. Faqirullah cites extensively verbatim from the Mānakutūhala, an early sixteenth-century Hindavi work traditionally attributed to Raja Man Singh of Gwalior.

3) The Tarjuma-i Kitāb-i Pārījātak, Figure 7: the stunning 1666 Translation of Ahobala Pandit’s Sanskrit masterpiece Saṅgītapārijāta by high-ranking Mughal nobleman Mirza Raushan ‘Zamir’, for Aurangzeb. Zamir was a renowned poet in Brajbhasha, and was also Khushhal Khan’s disciple in the practical arts of music. This is an early copy from 1688. 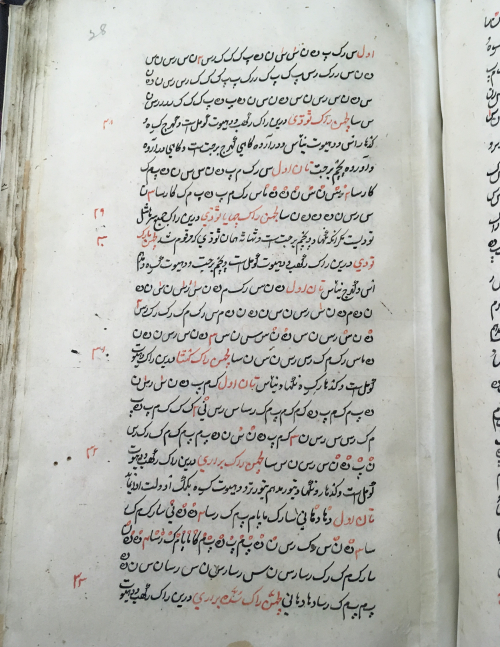 4) The fifth chapter of the Tuḥfat al-Hind or Gift of India, Figure 8: Mirza Khan’s famous work on Indian sciences written c. 1675 for Aurangzeb’s son Prince Muhammad A‘zam Shah (1653–1707), who himself wrote Hindustani songs and was the first patron of Niʻmat Khan ‘Sadarang’, the greatest musician of the next century. Almost all of this monumental work is drawn from Damodara’s Mirror of Music and Faqirullah’s Mirror of Rāga, but it is exhaustive, and was hugely influential in later centuries. 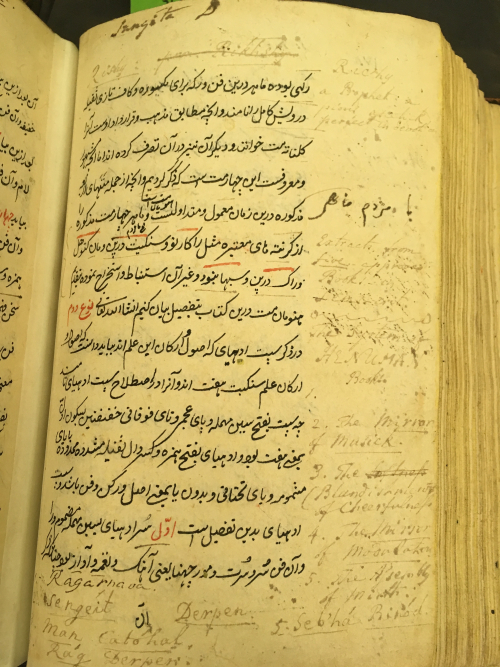 5) The Shams al-Aṣwāt or Sun of Songs, written for Aurangzeb by the chief hereditary musician of his atelier in 1698, Ras Baras Khan kalāwant, son of Khushhal Khan and great-great-grandson of Tansen. This work is primarily a new Persian translation of Damodara’s Mirror of Music, but is full of invaluable insights from the orally transmitted knowledge of Ras Baras’s esteemed musical lineage.

6) The Nishāṯ-ārā or Ornament of Pleasure, by the hereditary Sufi musician Mir Salih qawwāl Dehlavi (‘of Delhi’). This treatise is most likely late seventeenth-century; certainly no later than 1722, the date of the Royal Asiatic Society copy RAS Persian 210 (5). But there is a possibility that it was written in Shah Jahan’s reign by his librarian, Mir Muhammad Salih ‘Kashfi’, as stated in the colophon of one British Library copy, Delhi Persian 1502c.

These and other treatises written in the time of Aurangzeb range over exceptionally wide musical terrain in significant depth. But if they have one overpowering and unifying theme, it is their concern with the nature of the rāga, and the need to understand the true basis of its tremendous supernatural power in order to control and harness it for the wellbeing of individual Mughal men and the empire as a whole.

For more on how Khushhal Khan was able to use Ragini Todi to put the emperor Shah Jahan under his spell, with fatal consequences, you will need to listen to the podcast! Here are a couple of additional visuals to guide your imagination as you do:

and by way of explanation: 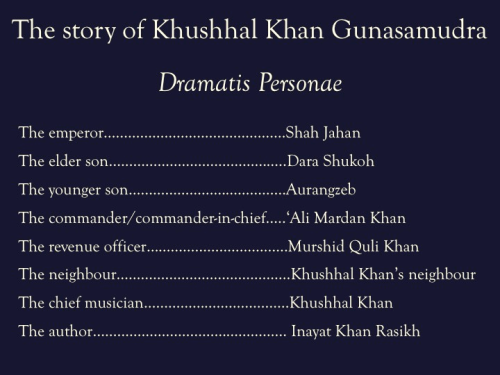 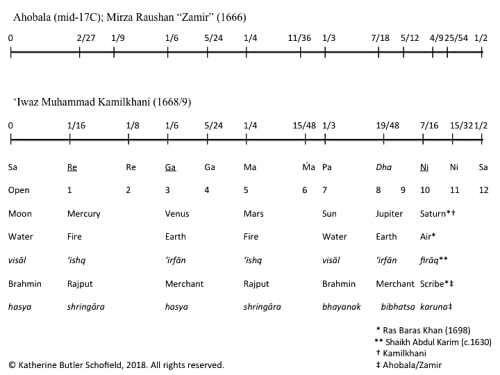 Fig. 10. The scale of the Hindustani rāgas worked out on the string of the bīn according to Pythagorian ratios, and their supernatural correlations; distilled by Katherine Schofield from the Aurangzeb-era treatises of Ahobala, Mirza Raushan ‘Zamir’, ‘Iwaz Muhammad Kamilkhani, Ras Baras Khan, and Shaikh ‘Abd al-Karim

With thanks to the British Academy and the European Research Council; and also to William Dalrymple, Bruce Wannell, and Richard David Williams. Any errors are mine.

[1] C A Storey’s handlist of the Delhi Persian collection states that the Shah ‘Alam of the colophon is Shah ‘Alam I (r. 1707–12), but it’s Shah ‘Alam II: the author adds a biographical note on Firoz Khan ‘Adarang’, fl. 1720–60s, calling him ‘today’s’ greatest musician.
[2] I am grateful to Richard David Williams for drawing my attention to this manuscript, and sharing his insights on it.
[3] Contrary to popular belief, Aurangzeb did not ban music. For more on Hindustani music and musical treatises in the time of Aurangzeb, see Katherine Butler Brown [Schofield], “Did Aurangzeb Ban Music?” Modern Asian Studies 41.1 (2007): 77–120; and Katherine Butler Schofield, “Reviving the Golden Age Again,” Ethnomusicology 54.3 (2010): 484–517.
[4] This treatise is sometimes erroneously dated 1674.