One of the things that we stress at the Business & IP Centre is the importance of protecting your idea and brand with intellectual property so it was interesting to see the recent news that Tottenham Hotspur footballer (for the moment!), Gareth Bale has filed a trade mark application.

Trade marks are badges of origin. They distinguish the goods or services of one trader from another and can take many forms; for example words, slogans, logos, shapes, colours and sounds.

Gareth Bale’s applications cover The ‘Eleven of Hearts’ image and logo, which refer to Bale’s goal celebration and his current shirt number. 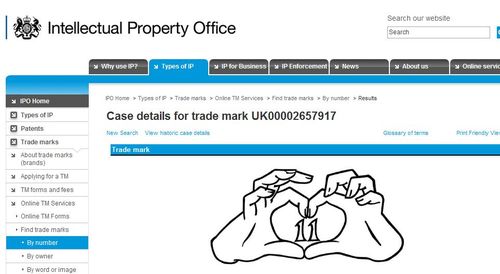 Trade marks are registered for specific goods or services within individual subjects, known as classes.  The official application made by Gareth Bale, which can be found on the Intellectual Property Office website, covers a number of different classes and will be applied to products including jewellery, leather goods, umbrellas, parasols and clothing footwear and headgear.

Figures of up to £10 million in earnings and endorsements have been mentioned in various reports and the trade mark is widely thought to be the first step in building a global Bale brand particularly ahead of his rumoured move to Real Madrid.

Other footballers who have also applied for trade marks include David Beckham who has applied as an individual but also under Beckham Brand and is estimated to be making up to £26 million.

Cristiano Ronaldo also holds trade marks for CR9 in classes covering a number of different things including services for providing food and drink, hotel accommodation, goods made from paper and cardboard and clothing, footwear and headgear.

Interestingly, CR9 is also registered under classes for games and playthings, decorations for Christmas trees and education. Perhaps Cristiano Ronaldo is already planning his future after football!

﻿﻿The benefit of registering your trade mark is that it prevents anyone else from using it and making money from it. So watch out for Eleven of Hearts clothing coming to a shop near you!

Find out more about how you can protect your brand with our guides and workshops.

Posted by Innovation and Enterprise at 9:50 AM