Loopwheels: how an idea for reinventing the wheel turned into our business

Our success story, Gemma Pearce, explains how they reinvented the wheel to get their business off the ground.

Loopwheels was first dreamt up when my husband Sam saw a woman pushing a buggy that caused the child to jolt forward when it hit the kerb. The pushchair had a big suspension system, which was of no help in mounting the kerb.

He thought how much better it would be if suspension could be built into the wheel itself, so that wheels could absorb shocks. He sketched his idea in his notebook and for a long time he thought no more about the idea he'd had. Sam’s first notebook sketch of a wheel with suspension, 2007

A year later, Sam remembered his idea for a wheel with integral suspension and he decided to find out whether it was an original idea, or if it had already been patented. He was disappointed to find that other people had tried to invent similar “resilient wheels” and that there are patents on various similar inventions from the early 20th century onwards. At first we thought that was the end of the idea. But it kept nagging at him.

“I wondered why, if people had had the idea of a wheel with suspension at the turn of the twentieth century, there weren’t any to be seen in use. I realised that whilst some of the early designs were right in theory, the inventors hadn’t been able to make them successfully because the materials they had didn’t have the right properties. I needed to make my springs from a material that was stiff yet flexible. Steel springs were no good. At the end of my street is an archery shop. One day I had the idea that carbon composite archery bows probably went through similar kinds of stresses as the springs in my wheels.”

It was when Sam tried using modern carbon composite materials to make the springs that he began to get the levels of high performance he wanted for a bicycle wheel. But developing, testing and refining the design of the Loopwheel, and protecting the IP, would require time and funding.

For several years Sam continued to work on other projects and I stuck to my career in the civil service, whilst in between times he would do further development and testing on the wheel. Sam felt I had skills which would complement his own engineering and industrial design focus, and help bring his idea to fruition as a business venture, but initially I was less than enthusiastic! I was worried about putting all the family's finances in one rather risky basket, and whether working as a husband and wife team would be successful. 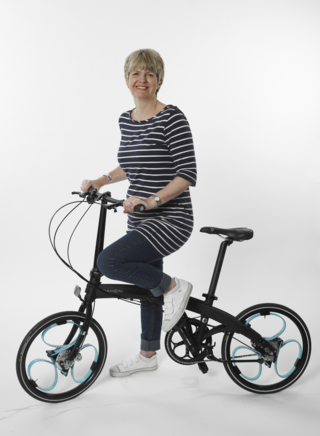 I began to use the services and events at the Centre to build my own knowledge and confidence about IP, marketing, and running your own business. I started to realise, when I listened to speakers at events like "Inspiring Entrepreneurs" or talked to fellow entrepreneurs, that I did have it in me to run a business successfully.

Bicycle industry experts reacted positively to our Loopwheel, and we felt that the only way we'd ever know if we could succeed in manufacturing and selling Sam's invention successfully would be if we put all our energy behind it. In 2011, with the government's cuts in public services, I had an opportunity to apply for redundancy. This was the "now or never" push we needed to decide to throw our combined skills and resources into bringing our product to market ourselves, and we grasped that chance with both hands.

We launched Loopwheels as a 20 inch wheel for folding bicycles in April 2013, at a bicycle show in Bristol, and I ran a successful crowdfunding campaign using Kickstarter. Our crowdfunding gave us orders and funding for our first production run, plus fantastic publicity and detailed customer feedback from around the world. It helped secure us our first distribution agreement. Just over a year later, we are selling Loopwheels to customers in SE Asia, the USA and the Middle East as well as in Europe. We have new product variants and are developing a new Loopwheel for wheelchairs.

There's an enormous feeling of achievement in taking an idea through to manufacture, and we are proud to be playing even a tiny part in renewed interest in engineering and manufacturing in the UK. We've always valued what it is to make something you can be proud of, and sharing that with other people. Every day I hear from people who love our Loopwheels, from all around the world, and I'm delighted that we can share Sam's invention with them.

If you want to take advantage of the booming bicyle industry, come along to our Bike to the Future event and become a success story just like Loopwheels!

Posted by Innovation and Enterprise Team at 12:04 PM