Make a Date with Business

A few months ago dating business Lovestruck was headlined in the business news for winning Best International Business at the British Young Business Awards.  Lovestruck was not only a success in the UK but their Chief Technology Officer and Co-Founder is quoted as saying “Many felt that the odds were far too stacked against us when creating a new premium online dating brand to challenge the entrenched, resource rich competition, so we are delighted that our growth abroad in particular Hong Kong and Singapore has been recognised”.

Soon after this award announcement I noticed Business & IP Centre customers looking for this topic in our collection and it seems our customers also have ambitions to create dating businesses.  I too began to investigate the subject on our resources and databases for news and market research that are available free in the centre helping me to understand the industry and landscape for dating and matchmaking businesses.

The dating and matchmaking business is not a new business idea and old adverts in printed format and business models have been around as long as the classifieds in newspapers.  In this BBC article there are examples of dating sites going way back in history.  As recent as the late 1990’s , I saw in printed copies of Your Dog magazine held at the British Library that pet owners advertised details of their dogs – but with the owners personal details for a match made in dog harmony.  However, with the growth of the web, there have been many changes both on setting up dating businesses and on using the sites in the dating game. There is little or hardly any stigma left for using sites and services.  The current market is prolific and was valued at £170million in the UK by Swedish company Metaflake. This is a trend that is also replicated in other regions of the world as demonstrated by this world map. 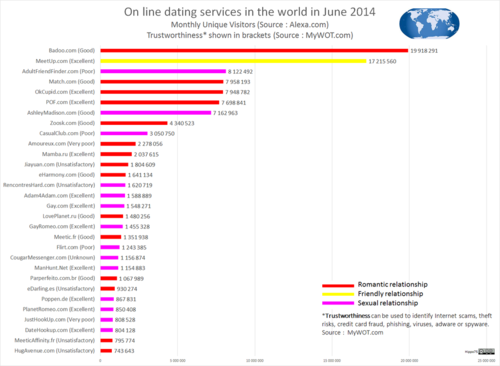 Dating service businesses are formed usually on their own genre, with a unique selling point (USP) based on clientele, such as Lovestruck, eHarmony, Match.com, My Single Friend and Christian Connections.  Newspapers and even radio stations aim for their own readership and audience with their sites such as Guardian Soulmates by the Guardian and ‘The Dating Lab’ by The Telegraph.  Some of these businesses are steering an industry on issues for the benefit of their customers and their own future standards.  There are two main bodies that are a good starting point for researching the industry and they are the Association of British Introduction Agencies (ABIA) (see also their directory) and Online Dating Agency (ODA).  Some of the concerns are authenticity and fake profiles, data privacy and security and consumer protection. The associations are set up to be used by premium brands to put together a code of conduct to protect the industry against poor practices and to uphold high standards of behaviour by the dating service providers in the UK. If you are thinking of setting this type of business, these two sites are useful for tips and best practices for consumers and providers.

In terms of the market research available into this sector, there is a useful Key Note Singles Market report in the Business & IP Centre – produced a couple (no  pun intended) of years ago but the analysis, facts and figures are still insightful for understanding customers behaviour.   For example, I discovered that 11.7% of the surveyed Singles Market confirmed that they had met their partners online. Regionally, those in the North (27.2%) were most likely to have met dates or partners online, while there were no respondents living in the East Midlands, South West or Wales. Personally, I find this is hard to believe!

When asked ‘What is the worst thing about being single?” they provided amusing answers which in highest ranking are “No one to talk to”,  “Having to Do the Household Chores all by Myself”, “Having to Go to Places on my own”, “Lack of Physical Contact” ,“People assuming you have a Partner”, or “Money Worries”. With answers like these, there are 32.2% of the single population actively dating.

Another interesting fact is where people like to meet. When asked the question “Where have you met potential dates or partners?” the respondents gave the following answers in ranking order – Place of Education, Pubs and Bars, Club and Work with the least favourite places for meeting people are surprisingly Online, Dating Agencies and Speed Dating.  This doesn't actually distract from the fact that the dating business can be profitable and online with people still using these sites. Speed Dating may not be popular according to this survey but in this similar format, we hold regular events at the Centre called ‘Speed Mentoring’ sessions with experts to give you advice on the topic of day.   This works really well for networking and making contacts.

If you use the London Underground trains, you cannot avoid noticing the ‘Tube’ adverts aimed at this same single market in the city. You can see advertisements with various agencies vying for the competition to gain some market share with some eye-catching adverts appealing to commuters. The adverts also show the various brands on the market, the differences in their target audience and inner aspirations in a partner such as the Christian Connections advert tailored for Christian customers.

Big Data generated by online business are also used to market businesses and to understand client preferences and behaviour. Data can be useful to push adverts, to create apps and for further innovations but they don’t seem to guarantee success in relationships as mentioned in this BBC article.

In a discussion with one of our Innovating for Growth delivery partners, Christopher Pett, who is a Product Development Consultant at Makerco, observed that "this is a great example of a service offer that is expressed from the customer's point of view, which people so often forget to do. In one advert, the guy was saying how he listened to his prospective partner's favourite album before their first date. That's such a simple way to demonstrate that users will establish meaningful relationships with each other before they meet and take time to get to know each other. It's a tacit offer that has an emotional impact on potential customers”.

The customers are at the core of these businesses.  Their buy-in to your service or product will help you gain more of the market and in turn, run a successful business.  Don’t waste anytime – make a date to use the resources such as the Cobra reports on Dating Agencies or Speed Dating Organiser in the centre to research about your particular idea.  The British Library is also an ideal place to spend time socially such as looking at our exhibitions and as a meeting place with someone in our restaurant for a date!

Posted by Innovation and Enterprise Team at 11:41 AM