An umbrella with style and strength - the Senz° XL storm-proof 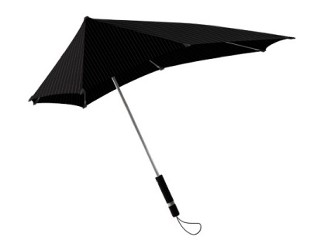 It's looks alone were enough to demand the attention and curiosity of my colleagues. And it was certainly easy to spot amid the forest of standard umbrellas, drying in a corner of the office after a particularly wet morning commute.

And I have to admit one of the reasons for buying the XL storm-proof umbrella from Senz°  was its unusual shape. It reminded me of a stealth fighter jet or perhaps something Batman might pull out if caught in a downpour.

The other reason - and the cause for the umbrella's striking silhouette - was the company's claim that it is capable of withstanding winds of up to 70mph without turning inside-out - or inverting to use the technical term. This was backed up by an impressive and, at times, hair raising demonstration video, which indicates it would handle anything that our weather here in London could throw at it. Although I do not recommend that anyone try the test at 1.48 minutes.

Senz° joins a long line of anti-inversion brollies (a quick keyword search for "windproof umbrella" in Espacenet found close to 200 patents), each with their own take on how best to resist the elements. Senz°'s offering is unique in that its asymmetrical, aerodynamic shape channels wind flow across its surface: preventing wind resistance that would flip a normal umbrella inside-out. It will also automatically twist into to the best position for it to battle the wind - as long as the handle is not gripped too tightly.

The invention was the 2004 brainchild of Dutch industrial engineering student, Gerwin Hoogendoorn. In classic inventor style, he decided there had to be a better way after the frustration of experiencing three broken umbrellas within a space of a week.

Having made the initial drawings and producing a prototype on his grandmother’s sewing machine, Gerwin approached fellow students of Delft University of Technology, Gerard Kool and Philip Hess, to brainstorm bringing it to the market. Within nine days of the umbrella’s launch in 2006, they had sold all 10,000 of their initial production run.

So much for the theory, but how has the XL storm-proof umbrella served me against London's ever changeable weather? After six years (by far the longest any has lasted) and some fairly testing storms later, it has held up well with only a few scratches on the top cap from the times that I had used it as a walking stick (which Senz° explicitly state in their care instructions I should not do... sorry). More significantly, it has not inverted once during the six years I have owned it.

So a case of style and substance, rather than style over substance? In this instance I would say definitely yes.

William Davis on behalf of the Business & IP Centre

Posted by Innovation and Enterprise Team at 4:01 PM