Book review - Noon, with a View by Stephen Fear 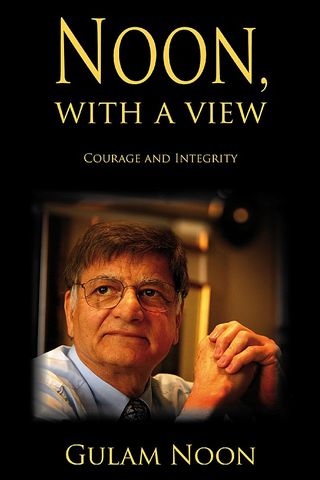 Gulam Noon was born and raised in India and lived in Mumbai. Having strong family values retained since childhood he joined the family business “Royal Sweets” and worked hard to expand the business. He left India in 1966 and came to London to find his fortune.

Having spent some time setting up businesses in both the UK and America – including expansion of his family business Royal Sweets, he established Noon Products in 1987 which led him to be known as the Curry king - credited with having created the UK’s favourite dish - Chicken Tikka Masala and favoured spicy snack - Bombay mix.

Noon Products in Southall produces food that tastes like its “Made in India”. Today, the company manufactures over 500 different chilled and frozen ready meals from factories in Southall and is sold in all the large supermarkets, the powerful motivation behind the brand was to create Indian food at its best.

Lord Noon is a man with integrity, honesty and social conscience, and talks candidly within the book about many aspects of his life including becoming embroiled in the cash for honours scandal in 2006 an episode which he was completely exonerated from.

The book written 5 years ago, is an inspiring read for any entrepreneur wanting to understand how to create wealth with integrity and honesty whilst retaining and cherishing relationships with friends and family since childhood. I wanted to quote the following passage from the book:
Quotation (Pg 85)

“I realise that anything I do through the foundation is just a drop in the huge ocean of suffering. I often explain my action by telling the story of a young man sitting by the sea shore. Each wave leaves behind it hoards of fish gasping for breath, the young man picks up as many as he can and throws them back into the water, he cannot possibly keep up. A passer-by asks him what he is doing as he seems to be wasting his time. There are so many fish that most of them will die before he can get to them . The passer by asks what difference he thinks he is making?Undeterred the young man picks up another fish, tosses it back into the water and watches it swim away – it made a big difference to that one he said.”

This sums Lord Gulam Noon up in my opinion, he is a man prepared to help individuals or groups in any way he can. In recognition of this Lord Gulam Noon has been awarded various honours including an M.B.E and most recently in January 2011, he was created a life peer as Baron Noon, of St John's Wood and was introduced in the House of Lords where he sits on the Labour benches.
Within the epilogue of the book, Lord noon mentions Noon Hospital a state of the art community hospital back in his birth place of Mumbai.

In summary – this book is an inspirational read for anyone, in particular those starting out in business looking for inspiration through a story full of courage and integrity. Lord Noon is a true patriot of the UK and a lover and patriot of India too.

Posted by Innovation and Enterprise Team at 3:51 PM