From Google to Poet in the City: London’s Knowledge Quarter to lead the UK's knowledge economy

The Knowledge Quarter in King’s Cross is the newest buzz in London. The project started two years ago and was officially launched in December 2014. It is a partnership of over 35 knowledge-based institutions within a three-mile radius of King’s Cross, who are united by the shared purpose of creating and disseminating knowledge.

The Knowledge Quarter’s mission is to promote the area around King’s Cross as one of the greatest concentration of knowledge institutions anywhere in the world, raising awareness of their outstanding facilities, expertise and cooperation. To find out more check the newly launched Knowledge Quarter website and Twitter feed @KQ_London.  Fran Taylor, Marketing Manager at the British Library, has also written a blog post London's Knowledge Quarter: Five things you need to know.

With the British Library as the Chair, the Knowledge Quarter includes an array of organisations such as the Art Fund, the British Medical Association, the Guardian newspaper, the University of the Arts London, Google London, Poet in the City, University College London, the Royal College of Physicians, the Francis Crick Institute and many more.

At the official launch by George Osborne the Chancellor of the Exchequer it was also announced the  new Alan Turing Institute will be housed at the British Library. This will help to ensure that Britain leads the way in big data, algorithm research and to recognise the contribution of Alan Turing to mathematics, computing and wartime code-breaking. 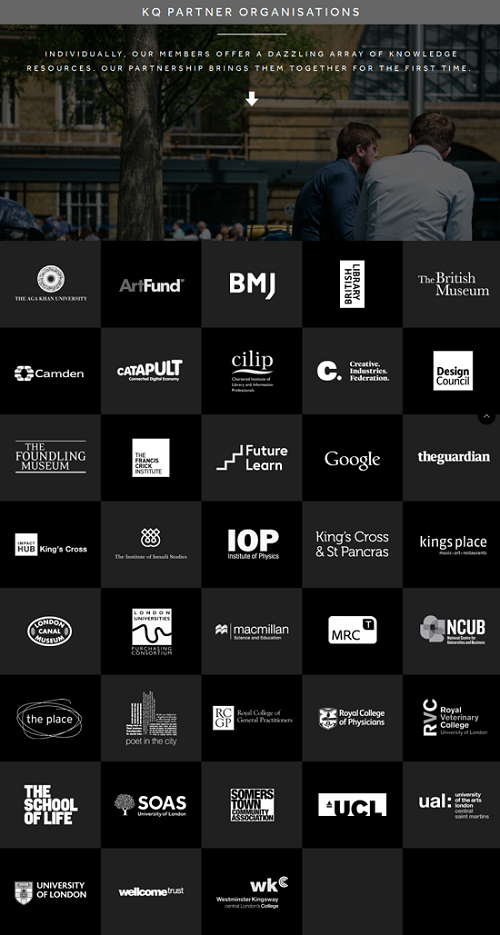 That week also saw the launch of the British Library’s Living Knowledge Strategy to 2023, which will bring all elements of this to life.

What is striking about all of this to me, is that King’s Cross has seen a phenomenal regeneration in recent years. It is quite a turn-around considering the previous gradual decline from its grandeur as a transport and commuter hub in the late 1880’s, to a run-down ‘red light’ district a hundred years later.

Coincidently, a couple of years ago I went on an official guided walk around the King’s Cross area, given by Rachel Kolsky of GotoLondonTours. And even though I  thought I know the area fairly well, I was still impressed with the history, regeneration and investment in the area.

It was on this walking tour with fellow information professionals, that I first heard about Google’s UK Headquarters moving to King’s Cross. I remember looking at the vista from the temporary viewing platform - I could see buildings housing the Guardian, The University of Arts, the Crick Institute, the amazingly rebuilt St Pancras Station, and of course my workplace the British Library. There are too many planned developments to share here, but I have written a blog post all-change-at-kings-cross which serves as a nice memoir. It also acts as a guide for those of you who haven’t visited as yet even for a leisurely stroll or to dine out in the area’s many eateries.

Business clusters and cultural hubs like the Knowledge Quarter can be a good way to give organisations with a common vision, opportunities to collaborate, connect and co-locate. Some other examples of ‘quarters’ are the Cambridge Science Parks, the ‘City of London’ Financial district, the Jewellery Quarter in Hatton Garden, the Inns of Court in Chancery Lane and Holborn, print and publishing in Clerkenwell and the Southbank for cultural activities. Tech City hub, also known as Silicon Roundabout in Shoreditch has been well documented. And in the north of the country is  Liverpool Knowledge Quarter. London Council’s report on business clusters attributes this clustering to the “critical mass in skills, services, knowledge and institutions which can underpin economic competitiveness and advantage”.

In an internal British Library presentation, I was pleased to hear that another objective of the King’s Cross Knowledge Quarter project is to increase local community engagement. Other targets are to develop further local schools engagement, apprenticeship, internships and training with organisations, such as with digital skills.  We also heard that by 2020, up to 50,000 people will be studying, and working in Kings Cross, and that the population of 225,100 is expected to increase by 2023 to just under a quarter of a million.

Without a doubt,  one of the main objectives of the Knowledge Quarter is to increase economic growth and development in the area, but also to reach out beyond London and the United Kingdom. In our digital connected world, it is a lot easier for organisations to be collaborate, connect and innovate across national boundaries.  So to say that the Knowledge Quarter’s ambition is global is not an understatement.

Here in the Business & IP Centre we have been doing our bit over the years to help companies start and grow into international businesses. And we have been using internet technologies to deliver webinars and our Inspiring Entrepreneurs events to an international audience. This month we have a host of events on ‘The Web in Feb’ and we have a London Business Information Guide to assist you to find information about setting up or doing business in the capital.

Seema Rampersad on behalf of the Business & IP Centre

Posted by Innovation and Enterprise Team at 12:47 PM