In Conversation with Kell Ryan: The Ryanair Story 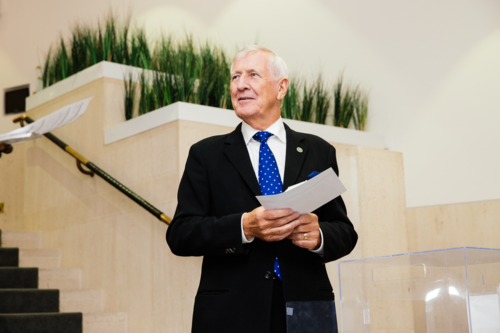 Last November as part of Global Entrepreneurship Week, the British Library Business & IP Centre had the unique opportunity to hear from the co-founder of Ryanair, about how he and his brother revolutionised air travel in Europe.

Long-standing Business & IP Centre partner, business-life coach and author of ‘Soul Trader’ Rasheed Ogunlaru talked to Kell about the inspiration behind Ryanair, the early years of the company and how it grew to become the leading low fares airline in Europe.

Kell, born and bred in Ireland, says times were tough at home; his father died when he was ten and all they were thinking about was survival. His older brother, Tony, got a job with Irelands national airline Aer Lingus and became the family breadwinner at 21 years of age. Tony went to New York with Aer Lingus and Kell believes it was there that the seeds were sown in Tony’s mind about filling a gap in the aviation business. 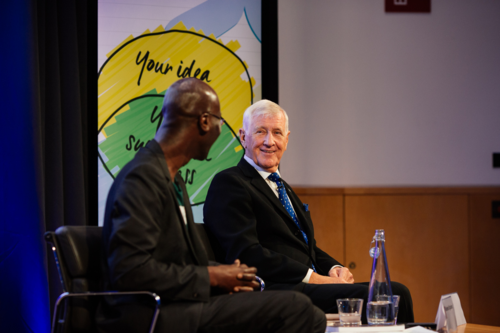 Tony loved New York and said ‘You should live in New York but have your weekends in Ireland’. He believed the world was a big place and that there are lots of opportunities out there if you could travel easily. So he embarked upon his entrepreneurial journey by forming a leasing company and thus started his involvement in the aviation industry on a much larger scale.

Kell describes how in the early 1980s, before cheap air fares, if you moved to England you didn’t get back to Ireland unless it was to be buried! Tony believed that travel was expensive and restrictive, but it would be possible to travel for low fares if airlines operated differently, and this was the foundation of Ryanair. He understood that tourism only works if there are low fares and access to travel for everyone. In the 1980s tens of thousands of people had left Ireland and he wanted to increase tourism and create jobs in Ireland to bring people back.

Kell at the time was working with Aer Lingus and Tony asked him if he wanted to be involved in Ryanair. The early days of the business were tough. They started with one leased airplane, a Bandeirante aircraft that had eight seats with a height restriction, meaning cabin crew had to be no more than 5’2’’. They eventually got a bigger aircraft and then started doing the London – Dublin route for a lower fare. To fly from London to Dublin cost £500 with other airlines, but only £100 with Ryanair. People saw this and loved it, and so the company grew.

The competition thought they couldn’t sustain this model, but Ryanair stood the test of time because nobody could match them on the low fares they offered. However, Kell admits that Ryanair couldn’t match other airlines in terms of speed and comfort. In the early days the business lost a lot of money, accumulating losses in the range of £20 million and Tony’s leasing company was running into difficulties. It was then Michael O’Leary got involved to try to rectify some of the problems. His solution? Shut it down, it will never make money. Tony, however, had a different view – he never took no for an answer.

Tony met Herb Kelleher, CEO of Southwest Airlines, the first successful low-cost airlines based in the US – they brought the Southwest model back to Ireland and there were real changes in Ryanair. They stuck to one type of aircraft, didn’t employ cleaners, charged for meals and drinks, and removed lemons from your G&T!

Finally, Ryanair became a serious competitor to Aer Lingus and other airlines. With the introduction of deregulation they started expanding into other European countries and it grew from there. They carried 10,000 passengers in first year of operation and now they carry 100,000 a day. The model worked and they continued to grow with more aircrafts and increased profit.

A small island of 3 million people became a big player on the larger scene thanks to Tony’s vision and drive. Despite the tough times and the criticism Ryanair has faced, they have succeeded with their model and grown into the largest business of their kind in Europe.

Diane Kelly on behalf of the Business & IP Centre

Posted by Innovation and Enterprise Team at 1:36 PM