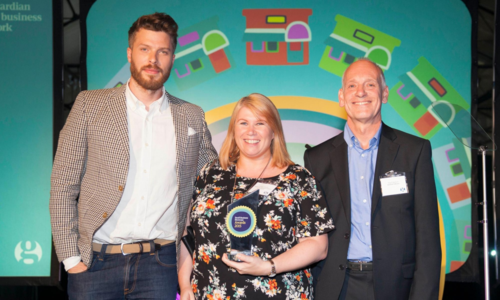 As staff of the Business & IP Centre approached ‘The Yard’ in Shoreditch, the aroma of street food and the sound of Coco and the Butterfield’s hybrid of folk and pop music were welcome signs that this was about as far as you can get from a traditional black tie and hotel suite award ceremony.  The Guardian Small Business Showcase Award Ceremony on 11 June was a friendly, informal, fast moving and hugely enjoyable night out; an uplifting  celebration of some of the UK’s most exciting and innovative businesses as well as tremendous individual achievements. It was also the third birthday of the launch of the Guardian Small Business Network.

The keynote speaker Will King, founder of King of Shaves, opened the ceremony by noting the irony of his presence in a London neighbourhood not commonly associated with the clean-shaven. As if to emphasise the point he introduced the host for the evening, TV presenter and writer, Rick Edwards sporting a luxuriant beard.   From then on we rattled through the 7 awards, each receiving huge applause from the audience, with Rick urging foot stomping to intensify the build up to the announcement of each winner. 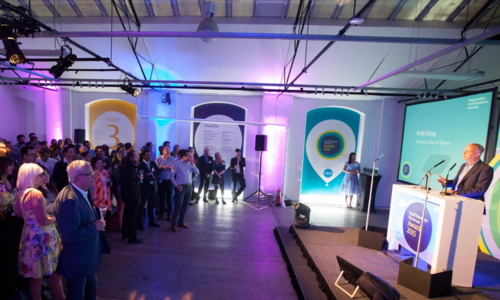 The first award was presented by Anna Bance, founder of Girl Meets Dress, for ‘Excellence in Marketing & PR’  and was won by See Sense an intelligent light for bicycles who demonstrated great opportunism in using the staging of the Giro D’Italia cycle race in Northern Ireland to promote their business. They saw off tough competition from Paramount, an estate agency, and Moop cleaning company.

Next was the award for ‘Cashflow Management’ presented by Simon Duffy of Bulldog Skincare.  The nominees for this award were consultancy business Bojangle Communications and Housekeep cleaning company.  The winners were DesignMyNight a guide and booking service that had demonstrated great skill in pivoting their business model to open up new income streams.

The Business & IP Centre’s Nigel Spencer presented the award for ‘Home Business Innovation’ to Meals for Squeals a cookery school which specialises in meals for children and toddlers.  The other nominees were The Bear and Miss Rabbit online toy retail business and MyBeautyMatches an online platform which enables women to personalise their cosmetic purchases.  All of these were remarkable examples of how a business can be run from home with the winner just edging ahead of the other shortlisted businesses.

We were almost half way through the awards in what seemed like no time and the fourth award for ‘Smarter Working’ was presented by Steve Matthewson from the Guardian.  This had proved a very tough category for the judges as the definition of ‘smarter’ had differing personal interpretations.   Eventually the judges had opted for Serps Invaders a digital marketing agency with their imaginative use of a four-day week and home working.  The other contenders were Dynamo PR and tech start-up firm TrueView. 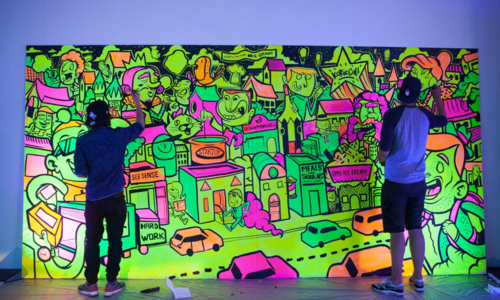 Next was one of the most prestigious awards of the night; ‘Start-up of the Year’.  This was won by Oppo Ice Cream who had experienced a spectacularly successful year driven forward by a record-breaking crowdfunding campaign.  The other nominees had seen years of rapid growth and these were Look Fabulous Forever a cosmetics brand for older women and Honest Brew a personalised craft beer delivery service. This award was presented by Zubair Mohammad and Emma Izatt, from Xero, the event sponsors.

We were now into the two awards for individual performance and the first of these was for ‘Rising Star of the Year’.  The achievements and potential shown by all three nominees was impressive and all were deserving of the award.   The two ‘runners up’ were Amelia Spencer from Paperchain Partnership and Kate Watts from RocketMill.  Dan Milmo from the Guardian presented the award to Korie Mills from Affari Media who had shown how the role of a designer can be re-defined and expanded to have a massive impact on a business.

The final award was for ‘Leader of the Year’ and was presented by the Guardian’s Claire Burke. This category was judged by a public vote and was won by Neil Grant who had the wit and imagination to realise that what the Ferndale Garden Centre needed was a sandy beach for families.  The other nominees were Andrew Daniels from Degree 53, Digital Design Agency and Mehdi Nayebi from KweekKweek a ticket selling agency.

And so it ended and the excited winners headed for the Pimms and Prosecco and to share stories with the other nominees and attendees.  The Business & IP Centre team had been joined by Celine a guest who had spent the week with us from Laval Mayenne Technopole an incubator and innovation centre in France.  What better way for her to get a real taste of the UK small business scene on her last night in London.

Posted by Innovation and Enterprise Team at 4:45 PM