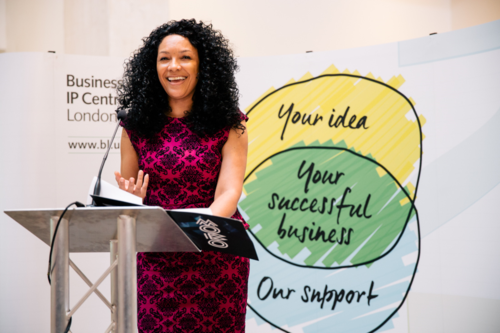 Last night the city library staff, stakeholders and entrepreneurs from across the country gathered at the British Library to celebrate the launch of an independent economic impact study on the Enterprising Libraries project. The event saw Roly Keating, CEO of the British Library, Kanya King MBE, CEO and Founder of the MOBO Organisation, and Darren Henley OBE, Chief Executive of Arts Council England speak about the success of the project.

Enterprising Libraries is a £1.3m partnership between the Department for Communities and Local Government (DCLG), Arts Council England (ACE) and the British Library which has enabled 16 public libraries, including six Business & IP Centres, across the UK to provide free access to collections and face-to-face advice and guidance for entrepreneurs on how to start, protect and grow their own business.  As a result of the early success of the project, DCLG and ACE, pledged a further £400k to sustain the Business & IP Centre Network and bring on two new pilots over this financial year. 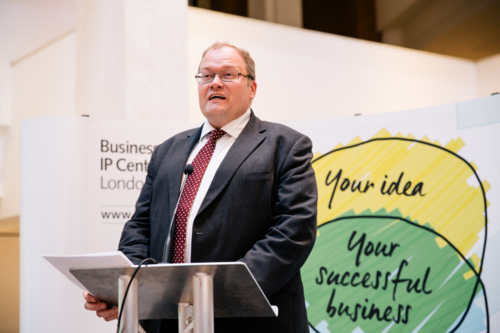 Highlights from the report

The findings reveal that a two year initiative to run business support services in libraries has attracted more than double the national average of women to start up their own businesses, and triple the number of entrepreneurs from black and Asian minority ethnic backgrounds. Other findings from the report include: 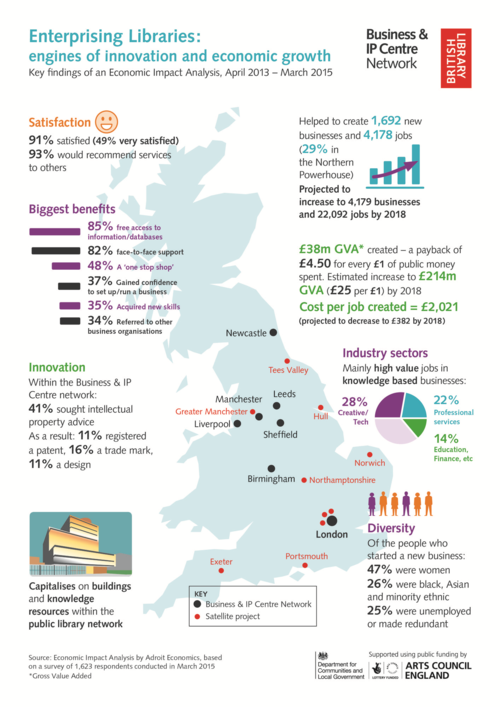 The results of the Enterprising Libraries project are testament to the power of collaboration across the library network, and the British Library is considering new ways to connect with public libraries, including a proposal, announced today, to work with the Library of Birmingham – already a Business & IP Centre partner – on a special project around the time of the 400th anniversary of the death of William Shakespeare in 2016.

“The findings published today offer hard evidence that libraries have enormous potential to help businesses to innovate and grow, through their ability to link people with vast amounts of information for free, and thanks to their special role as trusted, welcoming spaces in the community.

As detailed in our vision Living Knowledge, I look forward to working with partners to realise our goal of a UK-wide Business & IP Centre network in city libraries by 2020.” 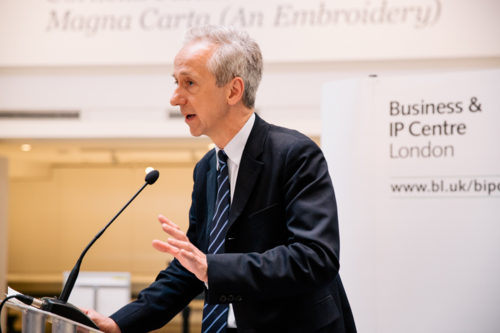 “The great thing about libraries is that they are open and accessible to everyone and, as such, I’m not surprised that these Enterprising Libraries have succeeded in attracting such a diverse audience in to use their services. There is so much untapped creative talent among women and ethnic minorities and I’m delighted to see these libraries helping them to turn their ideas into successful businesses.”

A big thank you for your support

The figures in the report are taken from nearly 1,700 new businesses created over a two year period as part of the Enterprising Libraries project. From our previous blog, we previously asked you to take part in shaping our future by completing our economic survey which has provided the data for this report. Thanks to all who helped us and gave your feedback. As promised, we are delighted to announce the names of those who entered the survey and have won an iPad Air 2 each.

And the winners are…

Congratulations to the winners. This project has since been concluded and what a great success the project was in delivering increased expansion to the local economic growth and improved social mobility. By viewing the  Arts Council website you'll be able to see the great outcomes that we're achieved successfully during the duration of the project. For more information on other projects we're conducting around the Business & IP Centre National Network and to find out what entrepreneurial activities are happening in a library near you.

Posted by Innovation and Enterprise Team at 11:54 AM