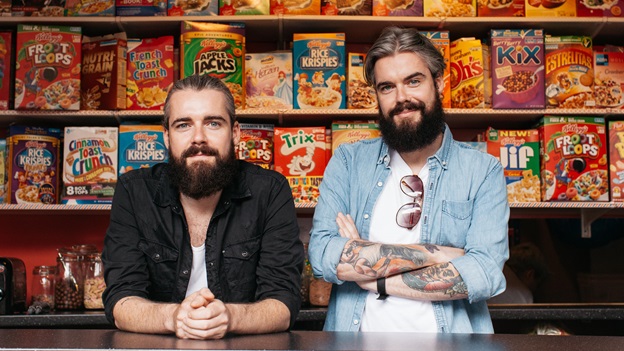 In London, the start-up scene provides us with an array of pop-up and niche shops and eateries that cater for all our wants. One that has recently captured many people's imaginations is the Cereal Killer Café, launched in Shoreditch by twin brothers Alan and Gary Keery. The cafe sells over 100 types of cereal, 30 different varieties of milk and over 20 toppings served in a nostalgic diner setting which transports you back to the 1980’s and 90’s.

In the two years since first opening their doors, they have seen the best and worst of being in the start-up spotlight; both by receiving fantastic press exposure but also by being at the receiving end of organised protests for how they represent unwanted ‘gentrification’ of some neighbourhoods. The notoriety which naturally followed has evidently driven the owner brothers on to secure even more success and answering their critics in the very best way.

What were you doing before you started Cereal Killers?

Gary was working as regional sales manager for E-Lites electronic cigarettes, while Alan was working for Superdry as a senior store manager.

What steps did you take to get it started?

After coming up with the idea, we researched how to start a business - we found the East London Small Business Centre online who provided a four-day course on the basics of starting a business and also supplied us with a business mentor to help with our business plan.

Your business has grown at a rapid pace, what have been some of the challenges you’ve found during that rise?

Initially, a big challenge was being able to meet the demand - we were selling about five times more than we had anticipated in our business plan so we were frantically trying to get cereal shipped in from the United States to keep up with how fast we were growing.

We have also had our fair share of hate - but being thick-skinned, this motivated us to keep going.

What advice would you give to an up and coming business?

You need to be passionate about what you do - if you aren’t, how can you expect anyone else to be? And research, research, research! We spent months and months deciding on every little detail of our business and these decisions were based on the research we had done - getting out on the streets of Shoreditch with a clipboard, getting info from the public.

We both LOVE anything peanut butter!

Posted by Innovation and Enterprise Team at 4:53 PM