How to get a granted patent

Getting a granted patent is something that every inventor dreams about. Aside from protecting your invention from copycats and the honour of being a fully-fledged inventor, having a granted patent is a great intellectual property that can give your business economic benefits as well as better valuation later.

It is for these reasons that I worked hard to get a granted patent for my first product, Nimble Babies Milk Buster, which is a baby bottle cleaner that detaches milk fat and proteins from plastic to free bottles from cloudiness and smelly odour.

After two long years, I am proud to say that our UK patent has been granted which gives us exclusive rights to the technology until 2035 and this has improved our chances of getting our patent applications approved in other countries too. What I hope to do in this blog is to share my learnings from the two-year journey and help you decide whether a patent application is for you. 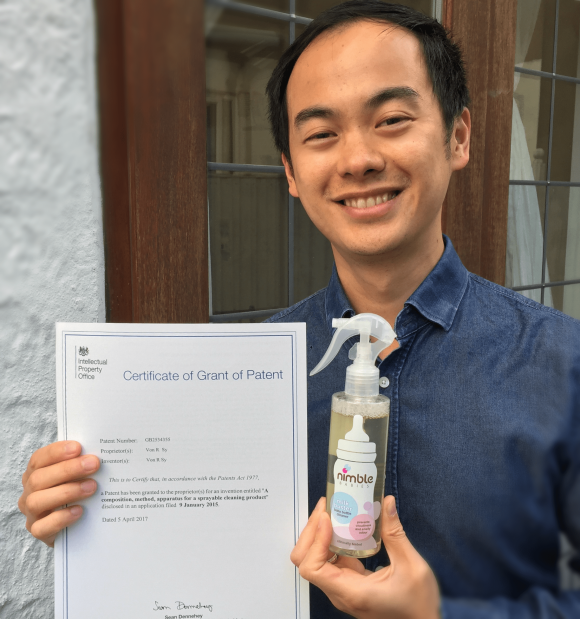 Do I really believe that my product is novel and inventive?

Just like most things that entrepreneurs do, getting a granted patent is quite a high-risk activity that can end up really putting pressure on your pockets. Before you set out and spend thousands of pounds in filing a patent application, your answer to the question above should be a resounding yes.

It can cost you around £5,000 to get a patent granted, so you have to be pretty convinced that your product is novel and inventive, which are the two main criteria used by the Intellectual Property Office (IPO) to judge whether your product is worthy of getting a granted patent.

Being novel means that no one has ever done exactly what you have done. Can you think of other brands and products within and outside your field that have done the same thing that you’ve done? Has anyone used the same ingredients in the same proportions before?

Being inventive refers to doing something not obvious to anyone who is skilled in your field. This is a little harder to prove but a good starting point is to ask yourself “Did I have to do something different to resolve a specific issue with the product?” If the answer is yes, say you had to change the way things are added, or you had to find better ingredients that are more suitable and didn’t find those solutions in any literature or other sources, then most likely you did have an inventive solution.

If you really feel strongly that your product is indeed novel and inventive after answering the questions above, then chances are you might be right. But to make sure that your assessment is right, you should do a formal patent search using tools like WIPO and Espacenet. These patent search tools are great but be ready to wade through tons of patents and applications. Searching broadly requires some skill, you may want to hire a professional who can do a patent search for you and just hand you a report with what they think are the relevant patents and applications to review. Before spending on anything, my advice is for you to get familiarised with it by attending free workshops on intellectual property run by the British Library and its National Network.

Should I hire a patent lawyer?

Once you’ve completed your patent search and have decided that you really have a patentable product, the next thing to do is to instruct a patent lawyer to formally file the patent on your behalf.

If you’ve done the patent search yourself and thought that it was a piece of cake, then you may think that you’d do the patent application yourself and save £5,000. My advice is not to fall into this trap. Writing a patent specification is highly technical and the whole application process takes two years, which involves a lot of written communication with the IPO. Doing it yourself means that you may miss out important details that would end up screwing your chances of securing a patent.

Although the total cost for your application will be £5,000, it can be split into two separate payments. You will need at least £3,000 to pay for the first step, which is the drafting and filing of the patent specification. The other £2,000 is to pay for interim services by the patent lawyer to review the examination reports from the IPO and draft a response. The interim services may cost more or less than £2,000 depending on how many rounds of examination and responses you’ll have with the IPO.

Since it is a two-year process, my advice is to find the right patent lawyer. Think of it as having a boyfriend or girlfriend for at least two years, so you really would want to get on well with your patent lawyer. Try to meet at least three patent lawyers from different law firms so you can have a better understanding of the whole application process and to also find the right lawyer for you who understands your industry and product well and asks the right questions. There are free IP clinics all over the country where law firms send out their lawyers for free 30-min consultations.

I must admit, I made a mistake and chose a law firm, which I thought was the right one for me. They were good in the initial meetings but, because I negotiated prices down to save on cash, I was assigned a trainee lawyer to draft my patent specification. The job was not bad but I felt that the trainee failed to capture well what was truly inventive. Because I didn’t know any better, we went ahead anyway with what was drafted and filed it.

But fortunately, a few months after we filed, I met a freelance patent lawyer through an introduction. He is very experienced and was genuinely interested in helping me succeed and I felt that he understood exactly what I did. And to top it all, he charged less than the law firms because he didn’t have huge overheads to pay, apart from his own daily rate. After some thought, I decided to cut my losses and transfer the case over to him and this is probably one of the best decisions I’ve ever made in the business.

This freelance guy came in at the right time when we received the first examination report and he took care of rewriting the specification as much as it was allowed and wrote a better and more accurate specification to give me the best chance of success. And yes, after two long years of waiting and responding to the queries of the IPO, they were convinced that my product was indeed novel and inventive and have finally handed me a Certificate of Grant of Patent. I can now proudly say that I am a bona fide inventor with a granted patent under my belt. We still have to complete our filings in other countries but having a UK patent granted gives us a better shot at achieving it.

If you’d like to learn more about patents or capitalising on your intellectual property, check out the Business & IP centre’s workshops and events here, to help you grow a successful business.

Posted by Innovation and Enterprise Team at 1:34 PM