Valentine's Day in numbers: a heart-stopping spending splurge in 2018

Valentine's Day is upon us and our partners at Mintel, a marketing intelligence agency, have put together this handy report to reveal which retail event is closest to the hearts of UK shoppers.

Love is clearly all around us with Brits proving their romantic side by splashing out more money on Valentine’s Day gifts than Easter. Love struck Brits spent a heart stopping £620 million* on Valentine’s gifts in 2017, compared to the £575 million* they spent at Easter. And despite the challenging consumer outlook, Mintel forecasts that sales of Valentine’s Day gifts will increase to an impressive £650 million in 2018 - a rise of 5% compared to last year.

Valentine’s spending received a boost from a significant increase in average spend: consumers spent £60 on average on Valentine’s Day gifts in 2017, compared to £41 in 2016. By contrast, the average spend for Easter was just £41 last year and £35 in 2016. 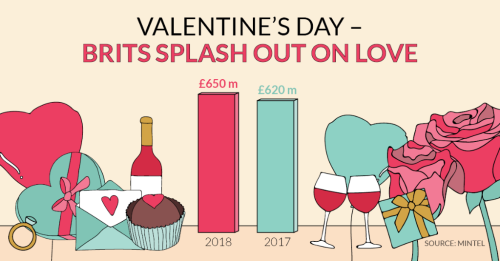 Older Millennials and men are driving the boost

Food and drink the way to the nation’s heart

Food and drink consumed at home tops the list of products Brits spent the most on for Valentine’s Day, reaching £128 million in 2017. They also liked splashing the cash on other romantic favourites, such as jewellery (£112 million), with flowers (£102 million) and clothing or footwear (£80 million) rounding up the top four purchased Valentine’s products. Spending on traditional Valentine’s staples, such as confectionery (£53 million) and greeting cards (£53 million), also generated significant amounts. 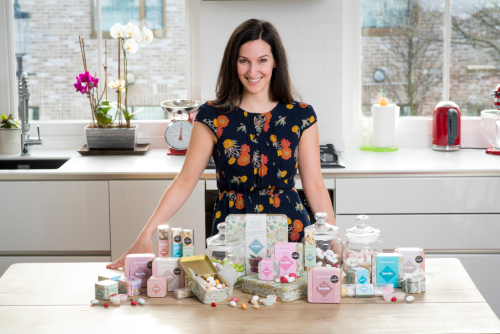 Six out of ten (59%) Valentine’s Day shoppers think retailers should offer more options to personalise gifts, while over half (55%) think that experiences make better gifts than products. They would also like more inspirational gift ideas, with more than half (53%) saying they think retailers’ suggestions in the run-up to spring/summer seasonal events (including Valentine’s Day) are boring.

According to Samantha Dover, Retail Analyst at Mintel, Valentine’s Day is now the biggest spending retail event in the first half of the year, overtaking Easter by a significant amount. This year shoppers are expected to trade up as retailers continue to increase their Valentine’s Day ranges with both premium and personalised gift options, and tapping into consumer demand for quality gifts.  Shoppers are looking for creative ideas ahead of the 14th February, especially those that go beyond the traditional assortment of lingerie, flowers and jewellery, with experiential gifts one way to make gift suggestions more appealing. With more demand for personalised gifts, retailers also have the chance to encourage higher value purchases by offering services such as monogramming and engraving, which have become increasingly popular.

Mintel is the world’s leading market intelligence agency. They cover 38,000 product launches a month and track consumer spending across 34 countries. Find out what they can do to transform your business by accessing their reports for free in the Business & IP Centre reading room.

Posted by Innovation and Enterprise Team at 5:37 PM