Erasmus for Young Entrepreneurs at the Business & IP Centre

Erasmus for Young Entrepreneurs (EYE) is a programme that gives new or aspiring entrepreneurs the opportunity to work with experienced entrepreneurs in other European countries. EYE is run at the British Library’s Business & IP Centre by Nigel Spencer, who is responsible for services to support innovation and entrepreneurship. Nigel looks at some of the success stories to come out of the programme…

“One year ago, I wondered how I was going to pay my rent, and this year, I ask myself why I did not join the EYE programme sooner.” James Markey

In early 2017 we held an event at the Business & IP Centre to promote EYE, as we are an Intermediary Organisation for this programme and manage these exchanges. James Markey came to the event and shortly afterwards he joined the programme. In December 2018 James received the exciting news that he had been shortlisted for the EYE programme’s Entrepreneur of the Decade Award and will be presenting his story at the awards ceremony in Brussels on Monday 18 March.

After joining EYE James told us about his plans for a business and we worked with him to identify the type of support, skills and knowledge he would need to help make them a reality. This gave us a clear idea of the type of mentor that would make the best match for an exchange. We then used our networks to find such a person. James was particularly interested in the application of virtual and augmented reality in a training environment.

Over the past eight years, we had worked on a number of projects with a business support service in France called Laval Mayenne Technopole (LMT) who were also an Intermediary Organisation for the EYE programme. LMT are located in Laval in the west of Normandy and we knew this to be an international hub for virtual reality. LMT quickly identified Arnaud Cosson, the CEO of HRV Simulation as someone who would be an excellent mentor and James spent January to April 2018 working with Arnaud in France. Before his exchange, he went on an intensive French language course to enable him to really immerse himself in the work of HRV Simulation and the local community. 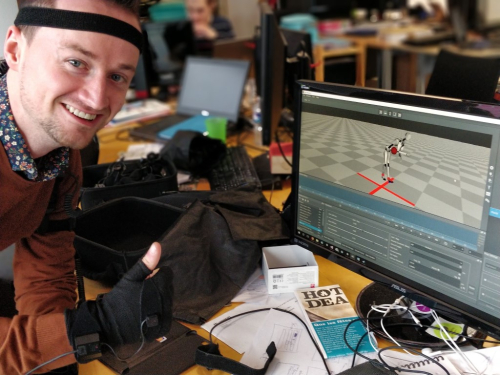 “I was given opportunities, both to work on my own business, and pick up live business experience within the host company. This ranged from supporting Arnaud with an investment pitch, demonstrating products to potential clients and getting involved in creating both the CRM system to support the growth and the marketing channels to create a future pipeline. In my final week with the company, I pitched my business, after which they became my first client.”

When he returned to the UK, James developed his business model based on what he had learned in Laval and launched his business, JPMentors. He now has clients in France and the UK and has taken on two members of staff and sponsored a youth football team in Portsmouth. The business is growing well and the future looks very bright.

James has definitely been a success story but is just one of the 68 exchanges we have arranged over the past two years and the vast majority of these have been great experiences for those involved.  50 new entrepreneurs have learned from experienced hosts in the UK and 20 new entrepreneurs from the UK have spent time overseas. We have been able to send people to places like Berlin, Lisbon, Valencia, Ljubljana, Vilnius, Naples, Dublin, Amsterdam, Brussels and as far away as Curacao in the Netherlands Antilles. We have welcomed entrepreneurs from Portugal, Italy, Germany, Romania, Poland, Turkey, Greece, Lithuania, Armenia, Bulgaria, Croatia, Spain and Hungary.

One of our more unusual combinations saw an entrepreneur from Anguilla spending time in Finland. Njeri Richardson owned Branches of Learning, an education service in the British overseas territory of Anguilla. Njeri was aware Finland has pioneered the most innovative approaches to teaching children with learning difficulties and she wanted to adopt these methods in Anguilla, so spent four months in 2018 working with Shirin Kulkarni at the Council for Creative Education in Tampere.

On Friday 1 February 2018, the Business & IP Centre’s contract on the EYE programme was extended until January 2022 and we are looking forward to offering these great opportunities to many more entrepreneurs. The geographical coverage of the programme was previously limited to European Union countries with some additional countries such as Turkey, the Ukraine and Serbia, but has now been extended to include Israel, Singapore, New York State and Pennsylvania in the USA.

The programme is funded by the European Union, but we believe that the only risk from Brexit is from a no-deal scenario as this would mean that all UK activity would end immediately. If you are interested in going on an exchange as a new entrepreneur or acting as a mentor to a new entrepreneur from overseas as a host entrepreneur, please contact us through email on research@bl.uk. You can find out more or apply for the programme here.

Posted by Innovation and Enterprise Team at 9:06 AM