I don’t know about you, but since the growth in our dependency on computers of all shapes and sizes my handwriting has certainly deteriorated. Everything I was taught at primary school has gone out the window in favour of Calibri 18 and the ease of using Word 2010.

I never really gave it a thought until I visited the British Library’s Writing: Making Your Mark exhibition and realised that we are (in my opinion) in danger of losing an art that dates back over 5,000 years.

The Writing: Making Your Mark exhibition is a fascinating look at the origins of writing taking us on a journey through time from ancient wax tablets through to modern day computer screens. A look around the exhibition was enough to send me back to the Business & IP Centre to see which patents I could find relating to some of the topics.

The first ball point pen (to give it its correct name) was invented in 1938 by Laszlo Josef Biro a Hungarian journalist. However, it wasn’t called a ball point pen initially, instead Biro’s British patent GB498997 had the title ‘Improved fountain pen’. It is said that Biro had noticed how newspaper ink dried rapidly leaving the newspapers smudge free and this gave him the idea to invent a writing implement that used the same kind of ink. However, as this ink was thicker than normal it wouldn’t flow freely down the nib of a traditional fountain pen and so Biro had to devise a new way to transfer the ink from the reservoir to the paper. He did this by adding a tiny ball bearing to the tip of his pen and found that, as the pen moved over the paper, the ball bearing rotated transferring the ink as it went. Success! 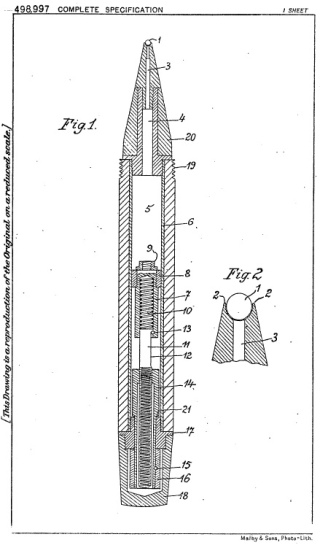 Biro’s version of a ball point pen wasn’t the first though. This honour goes to an American inventor named John J Loud. Loud invented a ball point pen which he stated in his US patent US392046 (issued October 30 1888) was “an improved reservoir or fountain pen especially useful among other purposes for marking on rough surfaces such as wood, coarse wrappings and other articles where an ordinary pen could not be used.” Unfortunately for Loud his invention does not seem to have been as commercially successful as Biro’s whose invention wasn’t developed until 20 years after Loud’s death in 1916. 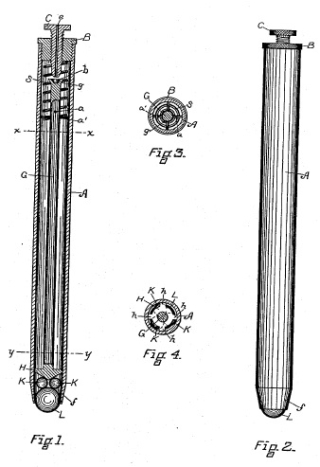 BiC Crystal is a name we are probably all familiar with as it is reputed to be the best selling ball point in the world. However, it’s not their ball point pen which is of interest, rather their patent application GB2218381A for a ‘Safety cap for a ball point pen’. They withdrew the application before grant, but still used the safety caps on all their ball point pens with the aim of preventing people choking on the caps should they make the mistake of swallowing one.

And what about pencils?

Pencils in some form have been around since the ancient Romans began using thin metal rods to make marks on papyrus. Some of these early styluses were made from lead which is where the name ‘lead pencil’ comes from, even though pencils today are made of graphite, graphite and clay or even plastic polymer. Some pencils were originally wrapped in string or twine, but later pencil cores were encased in hollowed out wood.

One of my favourite inventions relating to writing is Hall’s Diplometer. Patented by George F Hall in 1846, with patent number GB11060 of 1846, the Diplometer was a writing instrument which allowed pawnbrokers and the like to write out three identical tickets at the same time. I remember seeing one of these being used in a pawnbrokers when I was a child. One of the earliest forms of copying machines I have been able to find. 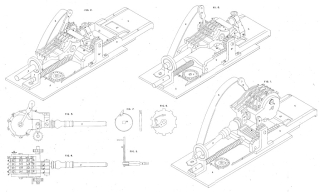 All of the patent documents mentioned above were found using the British Library’s Business & IP Centre collection of historic intellectual property. The collection is a great resource that can be used to trace your ancestor’s inventions or to check whether or not the idea you have for a new innovation has ever been done before. The staff in the Centre will be more than happy to guide you through your search. 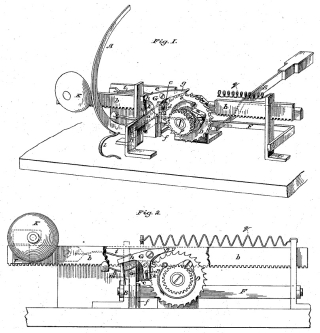 A final highlight from the exhibition, Hammonds Typewriter US224088 is only one of the patents obtained by James Hammond for his ‘Typewriting Machine’. The machine itself is a thing of beauty, although I am not sure how one would comfortably use it! 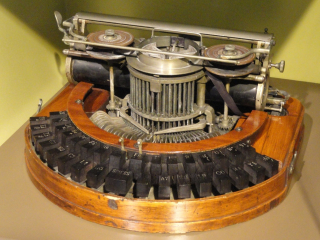 Posted by Innovation and Enterprise Team at 8:50 AM