Our ‘How to start up on a shoestring panellists taught us, more than anything, that starting up on a smaller budget doesn’t have to mean a cut in the quality of your business. 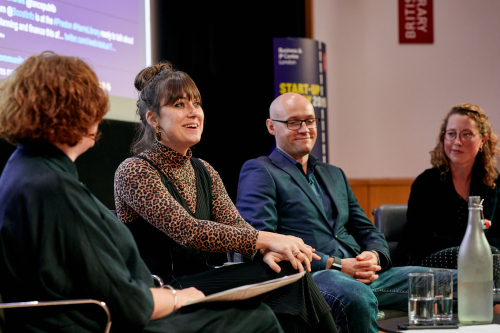 Alice Mayor from We Built This City, whose aim was always to put artists back in the West End, discussed the importance of finding champions and the support of people deeply invested in what you have to offer. Her advice was to think ‘who needs this product even more than you’. For Alice, that was someone who understood the importance of her mission and the key element of it being a bricks and mortar store, rather than solely online.

Pip Murray form Pip and Nut, also discussed the benefit of finding a mentor. Pip even embraced the idea of starting on a smaller scale, saying that otherwise, it can feel like a huge leap. It was a chance for her to test her product and get client feedback before jumping into manufacturing thousands of units at a time, as well as ensuring her recipes and supply chain was solid and confirmed. It was consumer feedback in its 'purest form'.

Sam Colwil from Bathrooms by Design also points out that there is a sacrifice to be made, when starting up on a limited budget saying ‘for about 3 years I was below minimum wage'. But now, Sam is looking to start creating his own products, investing in machinery that will allow an overall increased profit for the business, an innovative way of standing out in a field of stores that primarily stock the same suppliers.

Lynne Robertson, from Santander, started off this panel with the rousing comment that 'I honestly believe there is no time like the present to give this a go' - we hope everyone who was there in the room was inspired to get started, regardless of apparent financial constraints.

If you want the same inspiration, watch the panel in full below:

Posted by Innovation and Enterprise Team at 9:25 PM