IP Corner: How to choose a trade mark

We currently have a great exhibition on at the British Library on Buddhism, covering its origins, its art and its relevance today and I was lucky enough, to take a look at it. 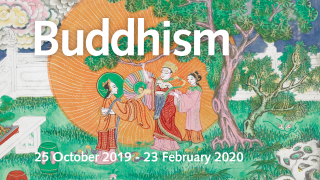 Buddhism began in sixth century in north India with the first encounters between Buddhist culture and the West occurring as far back as at least the fourth century. It is the world's fourth-largest religion with over 520 million followers, or over 7% of the global population, known as Buddhists.

Now, being a bit of an intellectual property (IP) nerd, IP is usually in the back of my mind as I wander through the various exhibitions. The recent British Library Writing and Leonardo da Vinci exhibitions were an absolute gift to someone like me who enjoys digging for relevant intellectual property material. However, Buddhism is a slightly more difficult topic methinks!

It didn’t stop me though, I now know that there are 3,881 registered designs to be found though searching the DesignView database (the database holds designs from 65 countries in total). Sadly though, none of the designs were actually still in force, they had all either ’lapsed’ or ‘ended’. Some of them covered very intricate designs such as the design for a pendant shown below. 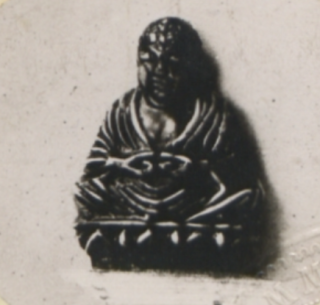 This Buddha pendant was made to a French design registered by Societe d'initiative commerciale, which lapsed in 1921. Lapsed usually means that the rights holder did not keep up payment of the renewal fees.

And what about patents? Well a quick, top level patent search through the Espacenet database looking for patents for moving Buddha items and using the keywords; statue? and mov* and buddh* resulted in 13 hits including:

Unfortunately, these are all either Chinese patents or Chinese utility models (short-term national patents) and the drawings are extremely hard to decipher, so I didn’t feel there was much point in including them here.

Trade marks on the other hand, there were 179 trade marks designating the United Kingdom which included the word ‘Buddha’. These trade marks were registered in classes which cover all sorts of goods and services. EU002695005 ‘Buddha-Bar’ for example is owned by GEORGE V EATERTAINMENT of Paris, France and is protected in various classes including perfumes, soaps etc., jewellery and horological instruments, household/kitchen utensils etc. plus a number of other categories of goods and services.

Looking at the various trade marks and the goods and services covered did make me think about how people choose their trade mark or their company name. As a consumer I have to say that personally I would expect any trade mark containing the word ‘Buddha’ to be connected in some way to Buddhism and the Buddhist religion. Perhaps that is the intention?

Trade marks, generally speaking, are used to indicate the origin of goods or services using “graphic” means. This usually means words, logos, pictures or possibly a combination of all these elements. Since a trade mark is likely to be one of the most valuable assets a company will own, it is worth taking time to choose a good one.

A new trade mark must not only not be the same as an existing mark, but it must also not be confusingly similar. So it’s important to do a thorough search (or to have a professional one done for you) through not only the UK trade mark system, but through all countries or regions in which you want to trade.

So some search key pointers;

Whilst trade marks help consumers to differentiate the goods and services of one provider from those of a competitor, they also assure the consumer of a certain level of quality of goods or service.

In the same way company names can also be powerful things and the right name can give you a lead in your chosen area of business. So are my thoughts on choosing a company name;

This actually leads me (briefly, I promise!) on to another topic, domain names! It is worth pointing out that trade marks, company names and domain names are three entirely separate things and that ownership of one does not automatically entitle you to ownership of the other two.

A domain name however can sometimes be more effective than a trade mark – think Compare-the-Market.com and the trials and tribulations of Aleksandr, Sergei, Oleg and Ayana!

Compare the Market would not have been accepted for registration as a trade mark as it is descriptive, but clever marketing turned a virtually unknown business into a much loved (by me at least!) TV ad soap opera.

If you are not sure, or if you would like more information please visit your local Business & IP Centre. Most of the BIPCs will offer access to a database called COBRA and from there you can find two business information factsheets that will provide help on the topic of choosing a name for your business or domain. The fact sheets in question are:

Posted by Innovation and Enterprise Team at 8:26 AM