Inventor(s) of the month, Alexander Fleming and the story of Penicillin

Miracles happen and they happen in labs. The modern laboratory has been a place of great discovery where the destinies of so many lives have been changed.

Among these great ‘miracles’ of the 20th Century was the discovery of penicillin. Millions upon millions of lives have been saved because of it. Perhaps you’re among them.

Anyone who has ever been prescribed an antibiotic will attest to its incredible effects.

But the story behind Penicillin’s discovery and use is fascinating, surprising and telling for our time today as we grapple with the a very different health challenge to what its pioneer, Fleming was addressing.

Sir Alexander Fleming (1881-1955) has long been credited as the person who ‘invented’ Penicillin. The man and the myth play upon a popular idea of the scientist as the lone genius and discoverer of new natural knowledge, previously hidden by nature. Fleming has come to embody this and he was quite happy to encourage it. 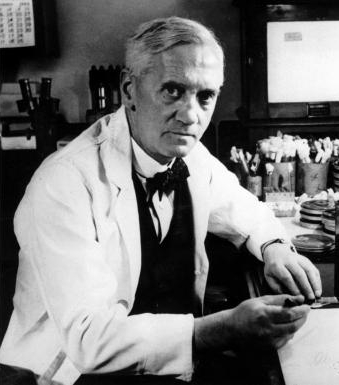 But the story of Penicillin is not the story of one person but of at least three. Among those who made it a reality are also, Sir Ernst Chain and Baron Howard Florey (the titles came later).

The story begins in 1928, when Fleming, by now a respected bacteriologist at St Mary’s had returned from holiday. On his return he noticed a discarded plate culture by an open window, where some of the micro-organisms were missing thanks to a contaminated mould. The contaminant was a common mould called penicillium notatum. What could’ve been ignored as a passing oddity sparked the curiosity of Fleming who saw the potential of what it could do against pathogenic germs. Concentrations of his ‘mould juice’ against the germs proved quite successful and Fleming reasoned this could be an effective, non-toxic, antiseptic for humans.

However, the concentrations weren’t high enough to have a significant effect on infected areas of the body, outside of very local treatments. Nonetheless, a paper was submitted in the British Journal of Experimental Pathology in 1929 summarising his findings.

The experiments weren’t taken much further until the late 1930s when the story of Penicillin takes another serendipitous twist.

Then, a brilliant Australian ex-pat by the name of Howard Walter Florey (1898-1968), who had earned himself a scholarship to Oxford to study Physiology was now the Chair of Pathology at Oxford. 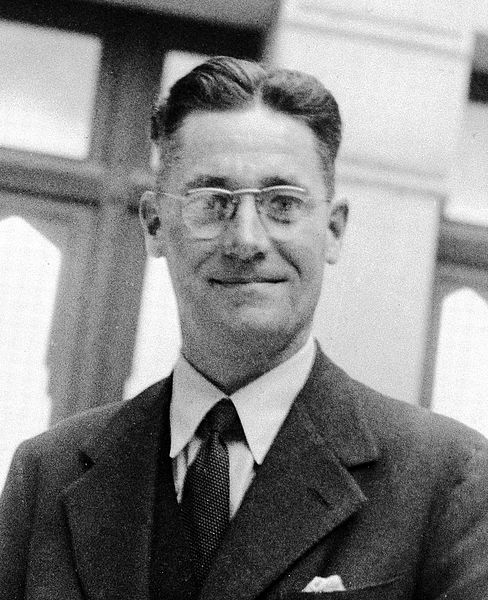 Florey’s force of personality had forged a culture of team work and collaboration that was to serve him well with an astonishing breakthrough. Working on a relative shoe string and hiring talented post-graduates with their own research grants Florey put in motion a number of research projects.

Among them was to establish whether there was a clinical value in working with the enzyme lysozyme and how that dissolves bacteria. Florey had some previous interest in this but was uncertain to the significance of it.

That was until one of his new hires, Ernst Boris Chain (1906-1979), a gifted biochemist and German-Jewish refugee who had fled Hitler’s Germany, embarked on new research. Chain had completed his second PhD, this time from Cambridge, and in working through the literature on lysozyme came across Fleming’s 1929 paper. It described how the penicillium mould seemed to dissolve any pathogenic bacteria in its vicinity. Chain became convinced that the problem of Penicillin’s instability of use could be overcome. Eventually after many experiments and collaborations, a bio-chemical breakthrough was discovered. A change of substance stabilised the Penicillin into a pure form to be effectively used. 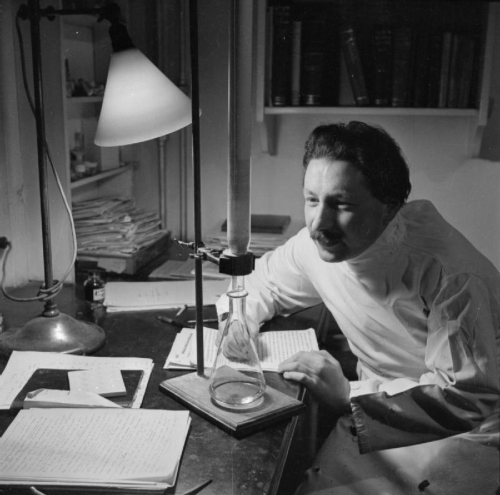 Soon experiments with mice had proven that Penicillin protected them from the deadly infections of streptococci and staphylococci. The results pointed clearly to the need for human trials, which Florey could now push for.

And so by January 1941, there was a limited trial on patients at the Radcliffe Infirmary, Oxford. Despite some restrictions the results were clear, Penicillin was demonstrated to overcome infections where other treatments couldn’t. Further trials over the next couple of years put its efficacy beyond doubt.

With the Second World War raging and its considerable loss of life, the necessity for new medical interventions to treat the wounded was overwhelming. The question now was how to utilise the incredible effects of Penicillin further.

And this is where industry gets involved. Florey needed funds and an expansion of infrastructure to scale production. However, the war had restricted the use of supplies and infrastructure in the UK so Florey had to look to the United States to overcome the next challenge. This one was technical, how to produce large quantities of the new drug?

This problem was solved during the war with the aid of American industry supported by President Roosevelt’s War Production Board. A technical solution was engineered using deep fermentation to mass produce the product for the front-line war effort.

By now the power of Penicillin was clear to industrialists and not just scientists and clinicians.

But it was a great irony that Florey was actively discouraged from taking out a patent on Penicillin as being unethical. Instead, in the US, a patent for methods of mass production of Penicillin in 1945 was filed by Andrew J Moyer, a microbiologist. The UK was soon to catch up regarding the importance of patent protection and industry, post-war.

The story of Penicillin is one that rings true for us today. The lone visionary scientist is an exceptional person indeed. There is only one Newton or one Einstein. But here instead we have brilliant individuals in their own way brought together by serendipity of circumstances, curiosity of subject and outstanding abilities.

Penicillin is a modern miracle in every sense. Its creators had crossed continents and borders to bring about its existence. In the case of Chain he had fled persecution or for Florey who found a new world of opportunity from outback Australia or for Fleming who had found fame from humble beginnings. Each were of their time but living in extraordinary circumstances, all working to bring about a little less suffering in the world.

Fitting indeed, that all three men were recognised by sharing the Nobel Prize for Physiology and Medicine in 1945.

And for that, and for our time, we have lessons to learn and gratitude to give.

Posted by Innovation and Enterprise Team at 9:00 AM