Inventors of the Month: John Waddington and Anthony Pratt

If you were to hear the names, Professor Plum, Colonel Mustard or Miss Scarlet, the board game Cluedo, might immediately come to mind. And for good reason too. The game is a part of so many of our childhoods.

It’s almost eighty years since the idea for what we now know as Cluedo was first pitched to Waddington games by Anthony Pratt, musician and factory worker at the time. Yet, would you think of it as a Leeds innovation? 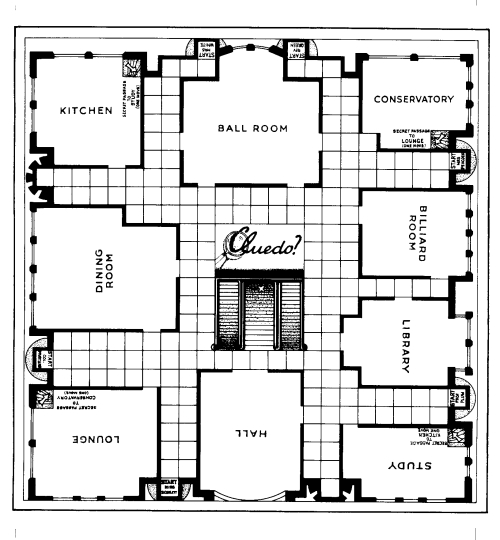 The story goes that he was inspired with his wife, Elva Pratt, to create a board game based on some of the live murder mystery games played in country houses that were popular at the time. The Leeds games company saw the potential of the idea right away and did a deal with Pratt.

The eponymous company was founded by John Waddington in Leeds. Its brand has been a household name in Britain for much of the 20th Century. If you could time travel back to any post war decade and take a peek into any games cupboard in any home in Britain, you’d likely find at least one Waddingtons’ game. Probably more. A household name is not an over statement.

So this was certainly a magnificent opportunity for both games inventor and manufacturer. Waddingtons was becoming a local Leeds institution and their reach would be pivotal to the success of Pratt’s invention.

But what was really the key to making Cluedo such a household name around the world? The answer is in three rather forgettable words, intellectual property rights. Here we see Cluedo’s widespread success and the collaboration between Anthony Pratt and Waddingtons as a fascinating case study in intellectual property (IP) and why these rights are so important.

We’ll see how and what lessons we can learn for a new generation of games inventors (and anyone else).

Waddingtons built their early success on another game, which also just happened to become a household name. The new American game, Monopoly. They had the exclusive licence from US maker and rights holder, Parker Brothers, to make and sell in the UK. A very savvy move as it turned out, as the favour was swapped with Parker Brothers eventually obtaining the licence for Cluedo (or Clue as it was rebranded in the US).

So the first lesson here is that being a licensor (the owner of the IP rights) and the licensee can (and should) work in both party’s interests.

It certainly worked for Waddingtons, as Monopoly’s success put them in a strong position to develop more games. Cluedo (and Anthony Pratt’s idea) came at just the right time in the company’s growth potential.

But what of the inventor; how would Pratt protect his idea?

Interestingly, Pratt patented the idea for Cluedo back in 1944. Though if you search for any patent called Cluedo, you won’t find it (for reasons to be explained).

Pratt’s patent specification GB586817, Improvements in Board Games, is a fascinating patent. You can view the original here. A patent is a particular type of IP protection for inventions and/or processes. It is usually technical or mechanical in nature, so it’s interesting to read how a game could be considered as such. 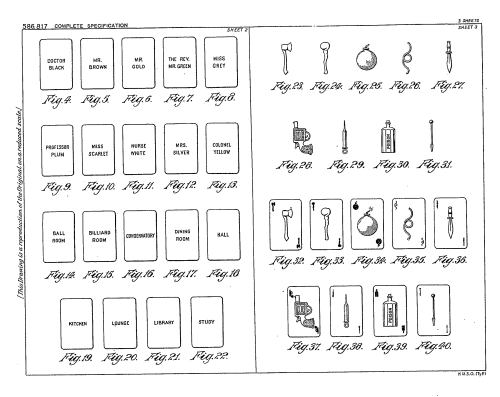 Illustration of cards and weapons from patent GB_586817_A

Here’s an extract from Pratt’s original patent, outlining the process in playing Cluedo. Anyone who’s played it may well understand the selected extracts;

A board game comprises a board divided into areas representing rooms of a house connected by small squares… ten differently coloured movable pieces representing persons, nine tokens each representing a weapon, and a pack of cards having three suits, one suit containing nine cards which correspond with nine of the rooms… The object of the game is to identify a hidden combination of three cards, one from each suit, as a result of information accumulated during play.

The patent for what we know as Cluedo was granted (meaning finally approved by the Patent Office) in 1947.

This gave Pratt, ownership and rights over the game and the ability to sell or licence the process behind the game to any games maker. Owning the patent also provided him a way to oppose any unauthorised copying.

It raises the question, can you still patent a board game today?

The bar is much higher today to be able to patent a board game. That’s because the same criteria apply, that is the games’ process, or method have to be non-obvious and never been done before. It’s actually more difficult to come up with a really new games process that is truly an innovative step.

It’s also the more costly of the IP rights and takes the most time. There are other IP options, the same ones that Waddingtons also used. 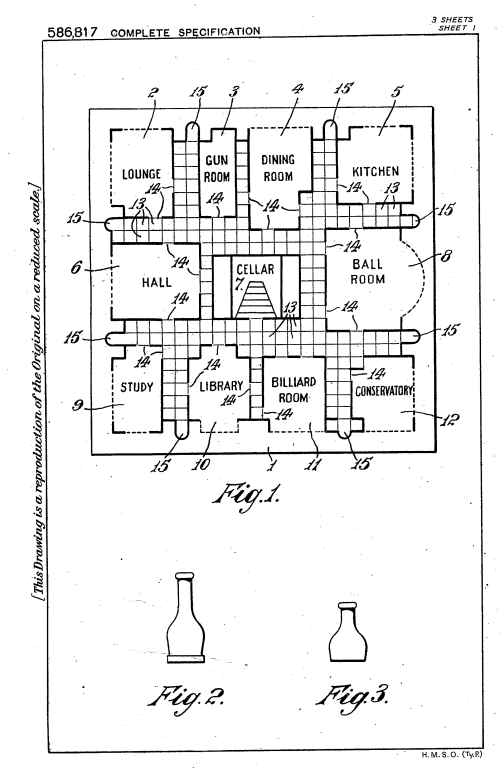 Illustration of Cluedo board from patent GB_586817_A

Copyright is an automatic and unregistered right, meaning the creator owns it as soon as it’s created. Putting a copyright sign, naming the owner and year of creation on the game is a simple and legally recognised way of asserting your IP rights.

Copyright applies to all artistic and written creations. It includes visual elements, wording and designs incorporated into the whole board game, and all can be considered copyright. If, there was ever any copying of a games look or distinctive elements, the creator can seek redress as an infringement of their copyright.

One other IP right called registered design, can sometimes be used. Especially if there is an element of the game that is three dimensional, such as player tokens.

The other very important IP right in relation to games is the trade mark. You can find more information about IP and board games by reading our Industry Guide.

Protecting the name of the game

The appeal to the game Cluedo is in the name, Cluedo. That may sound like stating the obvious but the creation and use of the name is another very important ingredient in a game’s success. The original name for Pratt’s game was Murder! But the one of Waddington’s company executives, Norman Watson, who ran with the idea promptly changed the name to Cluedo. Which was an apparent play on a Latin word ludo, meaning ‘I play’. A clever games title and eventually a brilliant, valuable trade mark.

Here is a wonderful marriage of concept and process (the patent) with the branding and name (the trade mark), topped with a visually appealing board design and unforgettable player names (the copyright). All of these forms of IP protection acts as bricks in a defensive wall of 'idea protection'.

But if you own the trade mark, in practice you pretty much own the game.

Our Leeds story goes global, as Waddingtons was purchased by American games giant, Hasbro in 1994. And so, Hasbro obtained all the IP rights to Cluedo. We can see that the registered trade mark for Cluedo is still active today. As well as the trade mark for the board game.

Hasbro have taken Cluedo into new directions. Interestingly, the design of the board game, with its various rooms and names is also now a trade mark. The company is using all means of protection to extend the life of the game and retain IP rights over it. It’s a way to safeguard the investment in its purchase. Is it hardly surprising when we see what a timeless success Cluedo has become?

In recent times there have been many Cluedo spin offs, including novelty versions of the game for the Simpsons and TV comedy Big Bang Theory. Back in the 1980s there were even computer game versions and film as well as a TV show in the 1990s.

It all goes to show how a great games idea, playing on our love of old fashioned parlour games, mixed with Agatha Christie style characters can create something as novel as a board game, lifting a name like Cluedo, to the status of iconic.

It was a Leeds inventor and games maker that brought hours of fun to families, down generations, around the world.

Posted by Innovation and Enterprise Team at 2:21 PM