A week in the life of Laura Sheeter, co-founder of Chalk & Blade

To celebrate the British Library's Breaking the News exhibition we wanted to get behind the scenes of news-breaking podcast producers Chalk & Blade, with a rare 'Week in the Life of' blog!

Founder and Creative Director, Laura Sheeter spent more than 10 years working as a news reporter in the UK, USA and former USSR - reporting on everything from the fate of abandoned Soviet military bunkers to the villages with only grandparents and grandchildren left behind in the exodus of Eastern European workers to the rest of the EU, the disastrous Deepwater Horizon oil spill in the Gulf of Mexico, and the rebuilding of New Orleans in the years after Hurricane Katrina.

After a brief career shift, working as a Russian to English translator, Laura and her business partner, Ruth Barnes, set up Chalk & Blade - one of the first podcast-only production companies in the UK - in 2016, before podcasting appeared to be a business at all. Soon the time came to grow their business, so they joined our scale-up programme, Innovating for Growth.

"The British Library’s Business and IP Centre was the first place, Ruth and I went to learn about how to set up a new business. It’s since become a bit of a North Star with us returning to its resources whenever we encounter new opportunities and challenges.

The sessions with the marketing and brand teams have helped immeasurably with the visibility of the business, particularly embarking on a new redesign of the website and relocation of the offices. The Chalk & Blade team is equipped with SEO-super charged ideas and branding tactics to position ourselves as the premium destination for podcast making."

The company makes premium branded content for brands and organisations including Net a Porter, Adidas and the UN, the hugely popular TV companion series Obsessed With for the BBC (now also a show on BBC3), and award-winning, critically acclaimed narratives including In Search of Black History with Bonnie Greer (audible), The Messenger (audible), Hunting Ghislaine (Global) and Taking on Putin - an independent production with John Sweeney.

So what goes into creating all this ear candy? Read on to find out.

It’s a new work and the first in our shiny new Chalk & Blade offices. While the rest of the world came to a standstill over the last few years, the podcast industry has seen a huge boom. IAB saw an ad spend of $1.4 billion in the space last year alone. With such demand across originals and branded content, we’ve been busy growing and developing the team and the relocation was all part of this investment in the next phase of the business.

Previously in a shared co-working spot on Old Street, we’re now settling into a Shoreditch warehouse space with our own front door and freshly brewed organic coffee on tap (high on the list of requirements during the multiple recces!). A new week gives me a chance to check in with a lot of the team’s projects and look ahead to line up meetings with potential creative partners, commissioners and journalists all bursting with great ideas that could lead to a project. 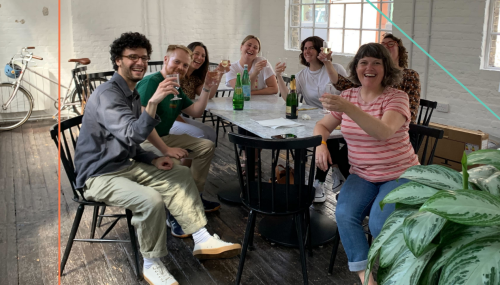 The team is in full swing juggling a multitude of shows this summer. In any one week, we’ve got a BBC show recording for TV and our first foray into visual podcast production (a fascinating experience and, yes, branded cushions are a must!), drafting and refining a very personal show which requires careful briefing, a narrative podcast in pre-production (our office walls are currently decked out with story arc ideas) and talent meetings to unearth some welcome fresh voices into the mix. 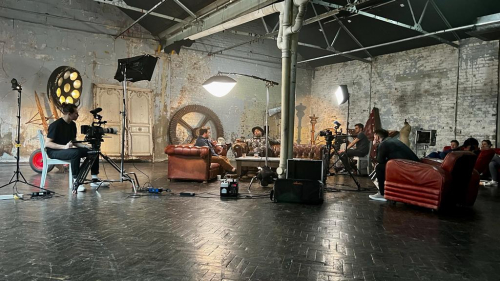 The news tells me that we’re gearing up for a heatwave here in London so this afternoon after school pick up I take the boys to get ice-creams (they both choose waffle cones like the sensible sorts, they are). When my co-founder Ruth and I set up the company, we were both parents and so we’ve always been very open about having to juggle the demands of a busy production schedule alongside homework/baking a sponge for the school summer fete or taking the dog for a spin around the park. This is something we’re also incredibly aware of for our team too and want to offer all of them the same flexibility, whether it’s heading to a spin class on their lunch break or needing to take a duvet day when they’ve had a tough week.

I get a text from my colleague, and Chalk & Blade’s Development Lead, Jason who is at the Children’s Media Conference meeting with other production companies and commissioners this morning. Behind the scenes, we’ve been scoping out opportunities for audio ideas for kids. We’re really excited about inspiring young imaginations through podcasts, both as audio experts and as parents who know the value of great content for our kids. 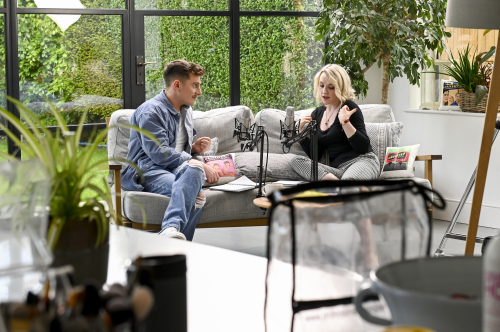 The final episode of our podcast series with investigative journalist John Sweeney, Taking On Putin, is out in the world and I couldn’t be prouder of the team! I first worked with John as his Executive Producer on our hit podcast Hunting Ghislaine so when he suggested we follow Hunting Ghislaine with a series about Vladimir Putin, I was all in. We actually started work on Taking on Putin nearly a year ago. At the time I had to keep checking with my business partner, Ruth Barnes, that it wasn’t too niche or geeky. Russia wasn’t fashionable, and those warning about the threat Putin posed were seen as paranoid, crackpots or warmongers. We never expected it to be headline news.

Taking on Putin has shown the true value of telling serious stories deeply, with character and humanity, because when the world takes alarming turns we need to understand not only the what, but have a trusted guide explaining the why of what’s happening too.

And that’s precisely the kind of stories we want to hear and tell through our podcast productions at Chalk & Blade. Posted by Innovation and Enterprise Team at 2:52 PM