News and technology have always needed each other. A history of breaking the news is also a history of the groundbreaking innovations used to deliver it.

Behind the incredible stories and newspapers that published them, in the British Library’s Breaking the News exhibition, is also the story of the complex inter-relationship between publishers, audiences and the society that delivered the innovations behind it.

For the last couple of centuries publishers having been finding new audiences and utilising new technologies to accomplish just one thing; to get news and information in front of people’s eyes in a way that’s commercially sustainable.

Here is a small selection of the technological innovations protected at the time by patents to enable them to do it.

China and later Europe lead the way in pre-industrial printing and publishing. But methods of creating and printing text were still comparatively labour intensive. The Gutenberg Press helped to mechanise the process but still relied on hand presses. Nonetheless it helped to satisfy the demands of a growing literate class hungry for new ideas and knowledge.

But it wasn’t until a few centuries later that we had the beginnings of the industrial age and the first machine powered printers. The limitations of hand presses precluded any possible daily newspaper from circulating widely. But between 1810 and 1814 came a breakthrough with German inventor Frederick Koenig’s ‘Printing Machine’ (patent GB 1810 3321) along with a number of other related patents.

The use of the word ‘machine’ itself is noteworthy, as it was a steam powered cylinder press. Some British investors interested in new printing technology who backed Koenig were rewarded with a machine that doubled print volume to 800 impressions per hour on previous technology. The door was now open for subsequent print machinery to develop.

By the middle of the 19th Century the first industrial society was emerging in Great Britain with similar changes in the US and Europe. Massive social changes were underway, among them the urbanisation of populations servicing the technologies of the industrial revolution.

Large populations within a comparatively small space meant distribution of information was able to be quicker and more efficient. Furthermore, other technologies and services such as the railway, canal network and the postal service meant a greater interconnecting of people, cities, towns and regions. News could be spread faster and the mass production of newspapers to a mass audience became a reality.

The technology enabled it and publishers, sensing a business opportunity, financed the capital to achieve it. Among the many emerging printing technologies of the time was British inventor, Augustus Applegath, and US inventor, Richard M Hoe.

Applegath can claim credit for inventing the machine that The Times of London was printed on. His invention replaced the previous flatbed printer and the new model was able to print on both sides simultaneously using a rotary technique. This enabled The Times to produce 4,200 prints per hour. A marked improvement in copies and also cost efficiency enabling the paper to expand its reach and influence. 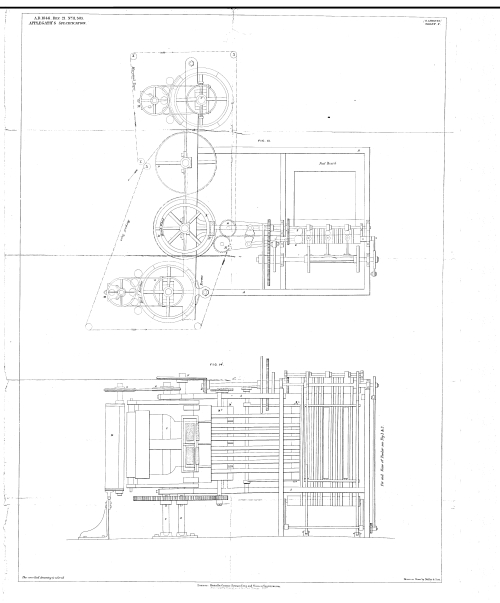 Following close behind Applegath was Roe’s, Improvement in Rotary Printing Presses, (US patent 5199, 1847). Publisher’s put it to good use and bought the technology. Roe’s invention was affectionately known as the ‘lightning press’, generating 8,000 papers per hour. Subsequent improvements meant newspapers could be printed on both sides as well as cut and folded. By the 1870s, technology meant the modern newspaper industry as we knew it for the 20th Century, was born. 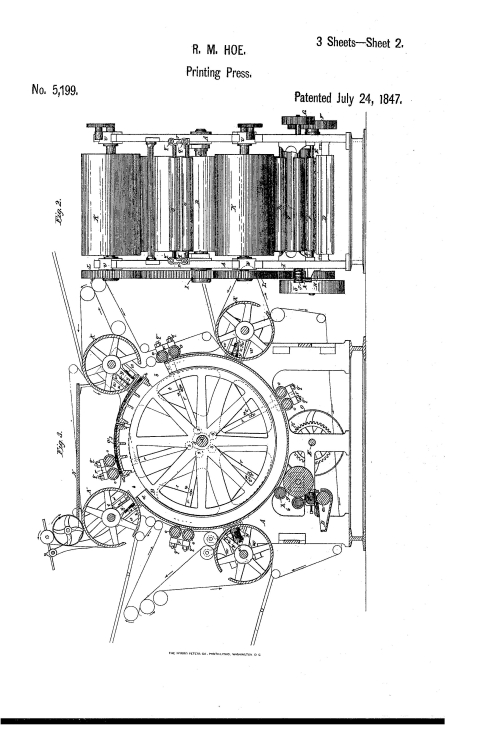 The golden age of newspaper printing

The early 20th Century was the golden age of newspaper publishing. The market had matured as huge audiences could be reached. Information could be passed around the world quicker with established communication technologies such as the telegraph and the hunger for daily news was now insatiable. Publishers, now an emerging breed of media barons, could consolidate their ownership over various titles as circulation figures kept rising.

The business model was focused on advertising revenue, keeping the cost of a single paper as low as possible for the consumer. This meant papers could be sold cheaply, or in the eventual case of local papers, delivered freely. All audiences in society had a paper to read, whether it be a broadsheet, red top or somewhere in between.

In the meantime, marginal improvements in technology ensured continuous profitability for the industry. A 1967 US patent (3,314,626) part submitted by the Hearst Publishing Company, essentially improves on the efficiency of paper use in large rolls. The print industry was certainly as efficient as it could be, however, other emerging media technologies began to have their impact.

Mass media and the internet

With radio and TV increasingly dominating the dissemination and delivery of news, advertisers could see their spend more effectively used through these mass media channels.

Scoops, splashes and investigative pieces still kept print media in the public attention and the value of local print news held steady over much of the second half of the 20th Century. However by the year 2000, advertising revenue for newspapers hit their peak and within ten years had sunk to below 1950 levels.

By the turn of the 21st Century, a now established technology called the internet, meant words on a page could now become words on a screen. News could be instantly delivered by newer and smarter ‘reading devices’, or what we now call smartphones and tablets.

The challenge of physical distribution of written content was now history; digital meant instant, anytime, anywhere. The 20th Century newspaper industry now had to become 21st. Some publications have managed the transition to newer forms and different business models. Many haven’t.

News Corp UK & Ireland [GB] patent application EP2747031A1, a method of publishing digital content, 2012, is a fascinating example of an established print media company innovating in the face of rapid technological changes, in this case with tablet formats. The patent attempts to recreate the newspaper column, as a reading experience, to the tablet. 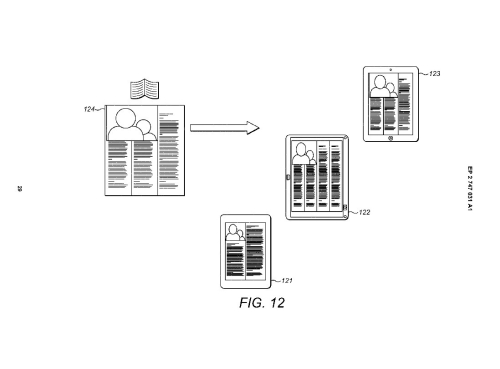 From one challenge to another

At the outset, all of this innovation was focused on solving one challenge; to get as many eyes as possible reading news and information at a price affordable to them and the publisher. The appetite was there and without doubt, technology over the 19th and 20th Century delivered to the audience’s needs.

The challenge of the 21st century is now not distributing content but holding attention. With printed news, posts, tweets and images bombarding us daily through our devices, could there be new innovations enabling us to see what we really want to see? This is the new and emerging business model of the tech companies who now have the lion’s share of advertising revenue.

How will print respond? And are there new innovations around the corner, and new audiences to engage with? Surely, there must be. The news isn’t broken yet.

Posted by Innovation and Enterprise Team at 4:01 PM