Gold and the alchemy of Intellectual Property

Our obsession with one metal has inspired some of the greatest art and creativity in history. Why are we so enamoured with it?

Gold is rare, malleable, remoulded and reinvented into countless forms, throughout many different cultures and civilisations. It is also incredibly beautiful.

We extract it from the earth to form objects that are coveted and often become more valuable over time until they become treasures. This process inspires great innovation and creativity. All in the pursuit of one, precious metal.

The British Library’s Gold exhibition showcases its own collection of golden treasures. On display are manuscripts, treaties and book covers of varying ages and from different places, cultures and civilisations from all over the world.

Here we see how this valuable commodity, when combined with innovation, creates new objects that can be protected, valued and resold. As we’ll discover, it’s a kind of intellectual property alchemy.

Over the centuries there have been various places where people have literally, ‘struck gold’. These have become renowned; from the ancient mines of Egypt, India and Anatolia to parts of Europe, where explorers obsessed over a mythical place in the new world called El Dorado, the city of gold. More recently, it is the 19th century that springs to mind, with its gold rushes in Australia, New Zealand and North America as well as Canada’s famous Klondike gold rush in the Yukon province, immortalised in novels and film.

Each gold rush generated new migrations, economic development and new technology. It’s here that the patent system gives an interesting snapshot into what was going on technologically as speculators were investing in sophisticated ways to extract more and more from the same mine.

A patent is an intellectual property right that will protect new and original inventions and processes. The British patent GB1853 no.997, Apparatus for Washing Earths containing Gold, is one such example. Here, two mining engineers from France sought protection for a new technique to ‘dredge’ and ‘wash’ earth and materials derived from rivers to extract more gold. We can see an illustration of how their patent worked in practice here: 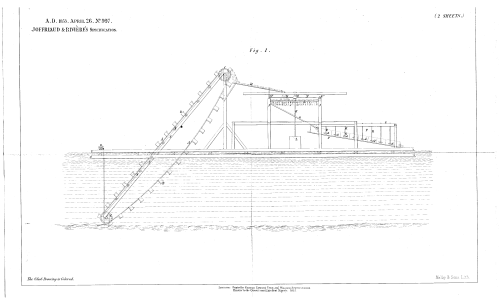 There were many other such patents at the time related to mining and metallurgy to keep up with the demands of the industrial age’s hunger for minerals and metals.

Once sufficient quantities of gold are gathered, they can then be transformed into objects of various kinds. How the gold is used has inspired many different techniques over time that have lasted through to today. The use of gold leaf is over 5,000 years old. Ancient Egyptians developed techniques to hammer gold into a thin layer, which created just the same appearance as the solid material but with a more economical use.

Gold leaf can also be finely ground into gold paint combined with a pigment to create ‘shell gold’. Again, another economical use of gold which means that the gold, in its leaf and shell forms, can be used in as varied works as wooden sculptures to gilded porcelain to illustrated manuscripts; such as the British Library’s Harley Gospels.

But the value is not just in the commodity, it’s in the artistic creation. Many jewellers have registered designs for unique pieces made of gold and other precious metals. A well-known brand like Bulgari have a number of watches registered as a design, presumably as they are unique signature pieces of great value to the brand and its design heritage. Here is one such UK registered design: 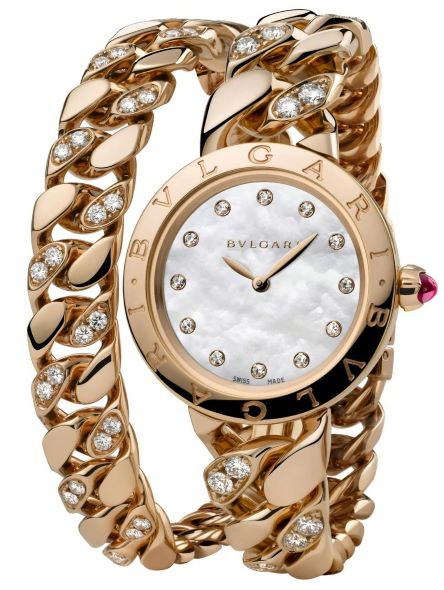 Registered design is an intellectual property right that gives companies or individuals the right to protect the appearance of a product, such as its shape or pattern. These are ordinarily for more than one piece that is in production.

But what about one of a kind creations using gold? Can they also acquire extra protection and value?

The golden rule of copyright

Each of the works on display in the Gold exhibition is a unique work of craftsmanship and art. Among the most modern is an Art Deco binding by Pierre-Émile Legrain (1889– 1929) of Colette’s La Vagabonde Paris, 1927. Like nearly all of Legrain’s work, they are one-off, original creations and so are automatically protected by copyright at the time of creation. You can call it the golden rule of copyright: if you create an original work it’s automatically yours to own (or sell). However, as Legrain died over 70 years ago, his work is now in the public domain so can be copied and reused. However, this doesn’t lessen the value of his originals, which sell at impressive prices at auction due to their recognised skill and scarcity. 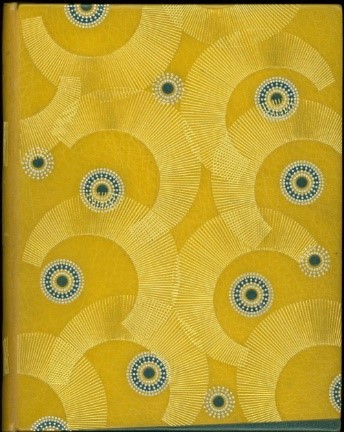 All that glitters isn’t exactly gold

Gold is so valuable and treasured that anything associated with gold, almost unconsciously takes on this value, conveying a meaning that taps into our shared cultural experience and memory. This is where the modern world of branding has lifted this golden association and taken it into new places, in every kind of trade conceivable!

What do you think of, when you hear ‘golden arches’?

A search on existing registered trade marks is a fascinating look at how everybody wants to be associated with all that’s golden. There are over 1,000 trade marks that begin with the word, ‘gold’. From estate agents to media companies, the tourism sector to restaurants, to name but a few.

This goes to illustrate just how we love all things golden, that the value of a trade mark and its reputation is enough for businesses to invest in their brands with the hope of one day selling or licensing their name. This is IP alchemy taken to another level!

Why gold will always hold its value

But it’s not just the value of gold as a commodity, it’s the versatility of gold that exponentially increases its value. Its value may be in a beautiful jewellery design, a one-off work of art that features gold, an invention to find more gold or the power of association that makes us love a brand or business.

Gold carries a symbolism seen in every culture and time. It’s been considered sacred and it’s been considered profane. It’s inspired the best of our creativity (and sadly the worst of our greed). It is truly timeless and its varying forms are endless.

So next time you see anything golden, remember there’s more than meets the eye when it comes to its value. There’s creative alchemy, and sometimes a little IP.