Under the microscope with the Lindisfarne Gospels

Six of the British Library’s Anglo-Saxon and medieval manuscripts are currently on loan to Palace Green Library  in Durham City for their summer exhibition. The work of our Conservation Science and Research team was recently highlighted in a post on the Lindisfarne Gospels Durham website. Microscopic analysis is often used by our team as part of the condition assessment of fragile collection items.

Patience is a virtue

Tiny drops of red/orange colour produced from toasted lead are found throughout the Lindisfarne Gospels creating outlines, patterns and backgrounds for many of the folios. This type of decoration often appears in early Irish manuscripts. In Figure 1 a section of the initial page of the Gospel of St Luke on folio 139r was analysed with image processing software to determine the number of dots. 1,939 dots were found in just this one example area. It is no wonder that the manuscript’s production was costly both in time and materials! 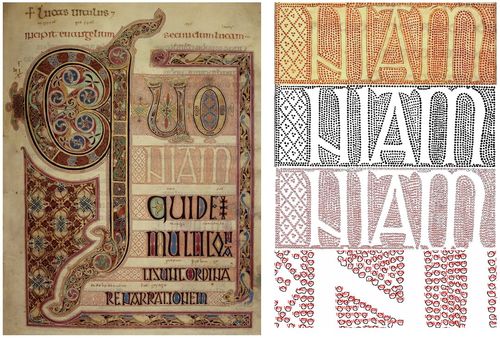 Left: Folio 139r displays the initial page of the Gospel of St Luke.  Right: An image of one area containing the letters niam from the Latin Quoniam (Quoniam quidem multi conati sunt ordinare narrationem) was analysed to count the number of dots

The Lindisfarne Gospels are particularly remarkable given that the entire manuscript is thought to have been the work of just one man. A century after the production of the manuscript a note was added at the end attributing the work to a monk called Eadfrith who was the Bishop of Lindisfarne between 698 and 721.

Eadfrith's patience wasn't the only thing at risk of cracking up. Craquelure is a network of tiny cracks caused by pigment shrinking due to age. It is often seen on paintings where large grids of cracks are visible across the surface. When the disruption consists of perpendicular lines it is referred to as crackling, and the potential for formation is exacerbated when the pigment has been thickly applied. Crackling is seen in many of the pigments in the Lindisfarne Gospels, even in the tiny red dots used for decoration. 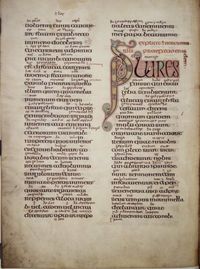 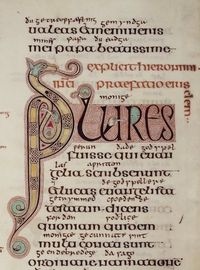 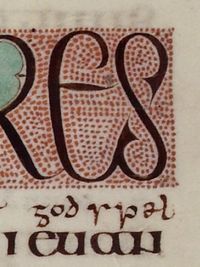 Figure 2: Increasing views of folio 5v showing red/orange dot detail. The Lindisfarne Gospels are written in Latin but an Anglo-Saxon translation was added between the lines in red ink when it was owned by Aldred, Provost of Chester-le-Street in the 10th century 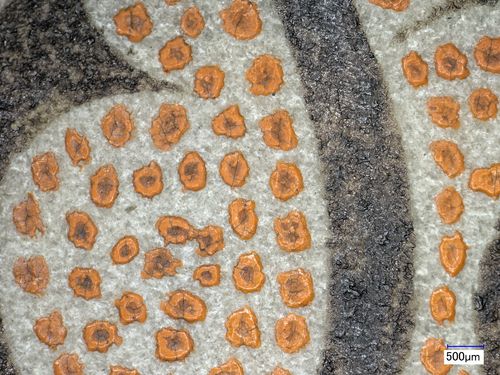 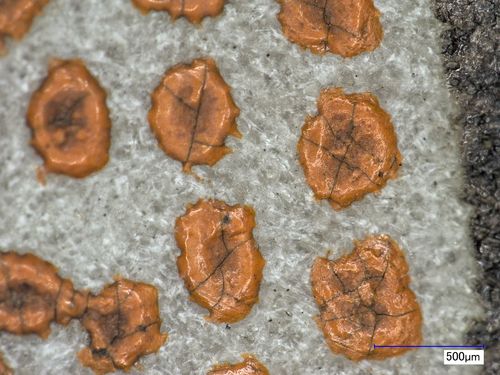 The exquisite suite of colours used in the manuscript was produced by Eadfrith using animal, vegetable and mineral pigments from both local and imported sources. A beaten egg-white preparation called glair was used as an adhesive and mixed with pigments. The black ink used for the main text of the gospel is iron gall ink made from oak-galls and iron salts, while a black pigment called lamp black containing particles of carbon was used in the illuminations. Green colours were produced using either verdigris, which is made by suspending copper over vinegar, or vergaut made by mixing blue and yellow pigments. The top of the decorated initial in Figure 4 is coloured with a yellow pigment called orpiment which contains arsenic trisulfide (As2S3). 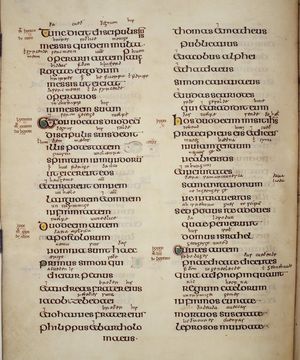 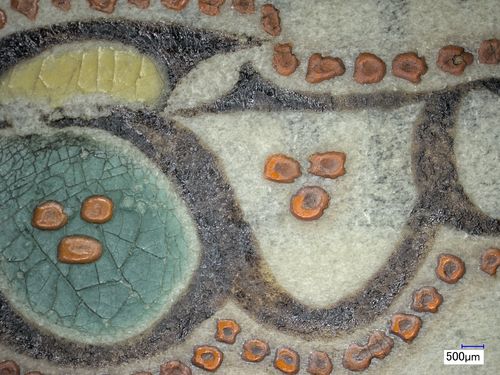 Folio 44v at 50x magnification. This letter is filled with a green pigment of either verdigris or vergaut. The top of the initial is coloured with a yellow pigment called orpiment. Crackling is visible on both green and yellow pigments

The chemical composition of the pigment contributes to the onset and degree of crackling. In the Lindisfarne Gospels, yellow orpiment shows the greatest degree of craquelure. 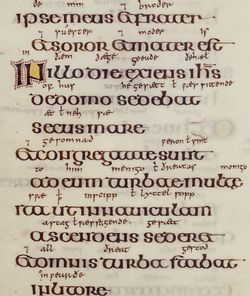 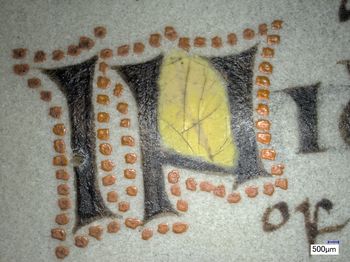 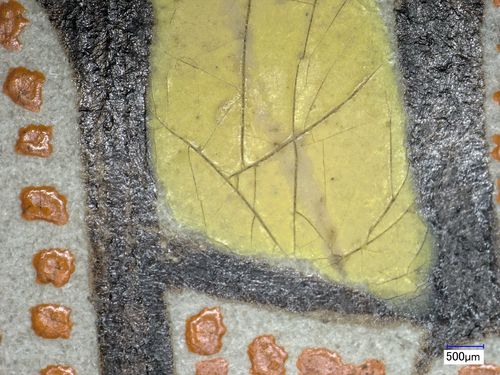 Above Left: A partial image of folio 51v which contains mostly Latin text with some decorated initials.

Above Right: A decorated initial at 20x magnification.

Below: Folio 51v at 50x magnification. Red/orange lead dots border this initial which is filled with orpiment showing signs of craquelure

The entirety of the Lindifarne Gospels is digitised and available online at the British Library’s Digitised Manuscripts website, as well as being available on the Library’s interactive Turning the PagesTM feature. It is well worth spending some time looking through the various illuminations. Figure 6 shows a region of the manuscript at 50x magnification. See if you can identify the folio (the answer is posted here)! 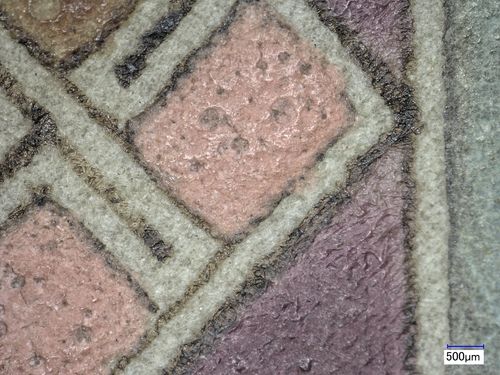 Figure 6: A 50x magnification image of a region on one of the carpet pages in the Lindisfarne Gospels.

The Lindisfarne Gospels is an incredible human achievement and a truly spectacular example of medieval artistry. The exhibition at Palace Green library runs from 1 July to 30 September 2013. If you are in the Durham area it is well worth a visit.

Posted by BL Collection Care at 9:56 AM

Truly one of the most amazing manuscripts ever created. Thank you so much for your conservation efforts and all the great information you share on your historic documents.