Did you know that ownership stamps are applied to items accepted into our collections?

Ownership marking is the application of the official British Library ownership stamp. The ownership stamp is used for security purposes and in tracing the provenance of the collections. Examination of the book itself is quite often the best place to start when trying to establish the history of an antiquarian book, and library stamps (acquisition stamps and book stamps) might indicate how and when it was acquired. Ownership of an item was routinely shown by the British Museum, and subsequently the British Library, by using inked stamps. These stamps give a fairly precise date of receipt for the volume leading to entries in acquisitions registers or invoices. A series of stamps was compiled by René Payne in 2007 from which many of the examples in this post have been taken.

Our Library stamps are generally divided into four types according to when they were in use ranging from 1753 up to the present day.

From 1753 to around 1836 stamps containing the words MVSEVM BRITANNICVM or MUSEUM BRITANNICUM were in use. The shape and arrangement of the stamp varied over the years and sometimes contained the initials of the previous owner.

A library stamp specially cut to include the initials of the previous owner, Revd C.M. Cacherode. 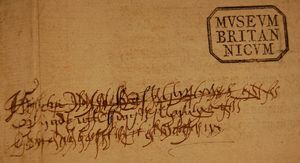 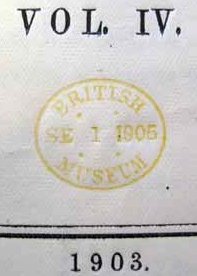 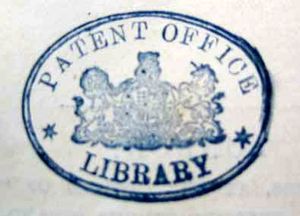 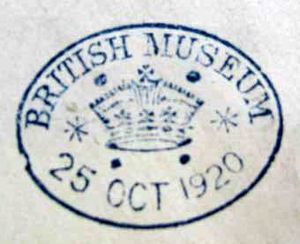 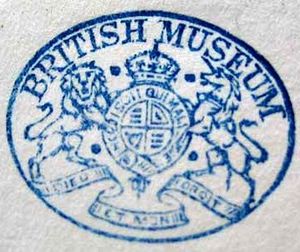 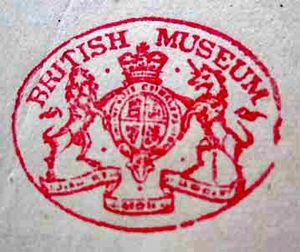 Figure 4: Oval stamps containing the royal arms flanked by a lion and unicorn with the words BRITISH MUSEUM; used 1837-1929. An abbreviated date of acquisition may be added, either with another inked stamp or in pencil. Note the variation in design. After 1929, the stamp was changed to Figure 5 (left)

Type 3 stamps were used from 1929 to 1973. They consist of round stamps containing the royal arms but no lion or unicorn, and the words BRITISH MUSEUM. Earlier stamps included an abbreviated date of acquisition e.g. in Figure 5 (left) the date is 15 February 1944. 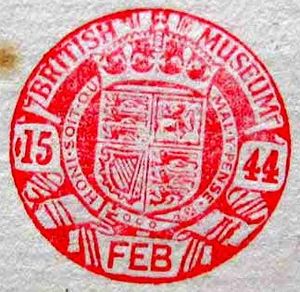 Round British Museum stamp with abbreviated date of 15 February 1944. 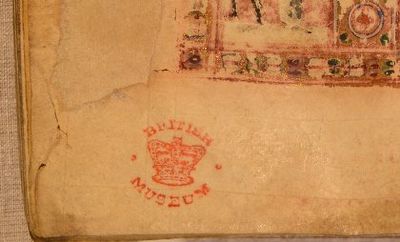 British Museum stamp below an illumination on f.46v of Add MS 36928. 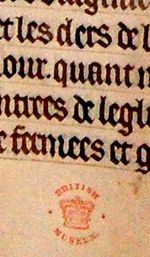 British Museum stamp below writing on Cotton Tiberius B8

Type 4 stamps reflect the time when items were stamped with the words BRITISH LIBRARY rather than BRITISH MUSEUM - a key turning point in the History of the British Library. The British Library Act was passed by Parliament in 1972 which brought the Library into operation from 1 July 1973. 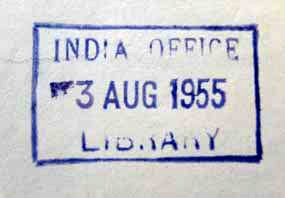 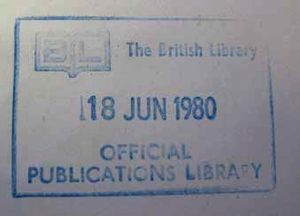 Document Supply Centre's official publication stamp dated 18 June 1980. It has been suggested that it differs from the round stamp because of where the item was received i.e. received in Yorkshire rather than London 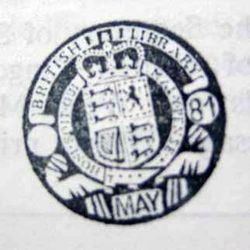 The words BRITISH MUSEUM were replaced with BRITISH LIBRARY, but retained a similar style to earlier stamps

These round stamps have been applied to early printed books acquired since 1973.

The stamp in Figure 11 shows the initials OIOC (Oriental and India Office Collections) which now reside within the Library's Asia, Pacific and Africa Collections.

Figure 11: Left: Oval hand stamp for manuscripts with the words BRITISH LIBRARY. Centre: India Office hand stamp for non-small 'claim material' items. These items were treated as part of the British Library collection. Right: Library stamp from previous Oriental and India Office Collections. Use of this stamp ceased on 1 September 2005

Significance of the ink colour

Different colour ink was used for library stamps depending on the purpose. All inks have been tested to ensure they comply with conservation standards.

While library stamps are a useful aid in determining the history of a collection item, it has been noted that many items were stamped much later than their acquisition date and mistakes are known to have occurred. Library stamps should provide just one piece of a greater body of evidence for determining both the circumstance and date of acquisition. Clues may also be found on bindings, bookplates or inscriptions.

Ownership marking is carried out at St Pancras and Boston Spa in secure areas with restricted access. Our colleagues in the Operations Division are responsible for stamping any new material that comes into the library. A new system is being introduced very soon which we will cover in a future post. Thanks to Graeme Bentley, Goods Inward/Finishing Team Manager, for input on this topic.

Posted by BL Collection Care at 11:03 AM

"For those who want to know more about the identification of printed books, using their stamps, in the early years of the British Museum, the detailed article by P.R. Harris entitled: "Identification of printed books acquired by the British Museum, 1753-1836, is Appendix I of 'Libraries within the Library; the origin of the British Library's Printed Collections', London: British Library, 2009, pp. 387-428."

Though obviously unlikely in the Library's current collections, I've seen a variety of colorful discard stamps over the years such as this 1889 "duplicate" stamp: http://www.flickr.com/photos/58558794@N07/6987006847/ Now at Penn: http://dla.library.upenn.edu/dla/franklin/record.html?id=FRANKLIN_5751586

A good reference for provenance research using library stamps can be found in Provenance research in book history: a handbook, by D Pearson (London, 1994. repr. 1998). [RAR090.16], with specific mention of BM and BL stamps.