Here’s looking at you kid: Under the microscope with leather

We recently posted about parchment and how our conservators treat parchment collection items, but what is the difference between leather and parchment?

Parchment and leather are both made from animal pelts, but parchment does not undergo tanning as leather does. The process of tanning traditionally used tannin which is an acidic chemical compound making material less prone to decomposition - including molting and holding odours. Good leather is waterproof and more durable than parchment. These properties have led to leather being used for clothing, footwear, upholstery, armour, and as a writing material. Book bindings are sometimes covered with leather and display a grain pattern where follicles are observed. Follicles are mammalian skin organs that produce hair, and variations in their distribution and frequency can help researchers determine the species of animal used. Variations in texture, colour, and thickness of leather also offer clues.

Due to the variety of material in our collections, we have samples of different animal leathers in our conservation studios. The most commonly used varieties of covering material for bindings in the British Isles were calfskin, sheepskin and goatskin. Here we go under the microscope to take a look at the follicle distribution of goat, kid, calf and sheep leather.

The most frequently used tanned skin for binding was calfskin. It is often found plain but sometimes a pattern effect is achieved by staining with paint or acid. Cow hair is fairly evenly distributed and serves to insulate the animal’s body. 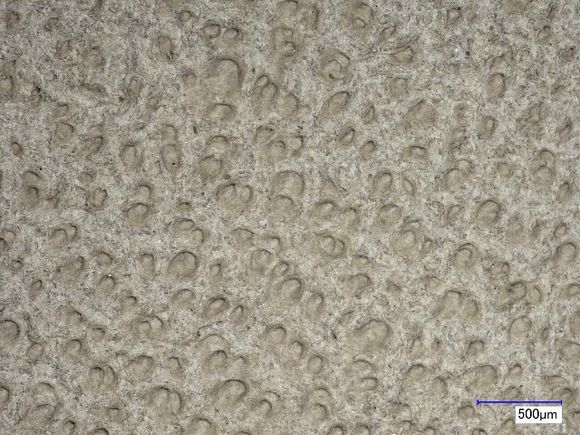 Microscopy of goat leather shows two rows of follicles of different sizes indicative of a two-coated fleece. The larger follicle is known as the primary follicle and produces the goat’s guard hair which is present all year round. The smaller follicles are called secondary follicles and produce an undercoat which grows more during the colder winter months. The undercoat is made up of soft, downy hair and is the hair used for fine materials such as cashmere when taken from Cashmere goats. 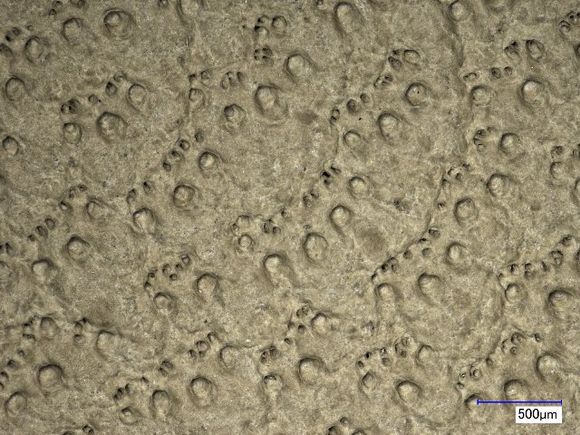 Young goats show a similar skin structure to the adult goat, but follicles are not as apparent in kid hides. Goat and kid leather was used for the best quality work being known for its well-grained, shiny and hard-wearing surface.

Sheepskin has narrow follicles which produce crimped wool fibres. Crimped fibres distinguish wool from the straighter fibres found in hair or fur. It is this crimped profile which makes sheep’s wool a great insulator by trapping air and becoming bulky. Wool is also elastic and grows in clumps known as “staples” as observed below. Fine wool such as Merino has more crimps per inch than other wools. 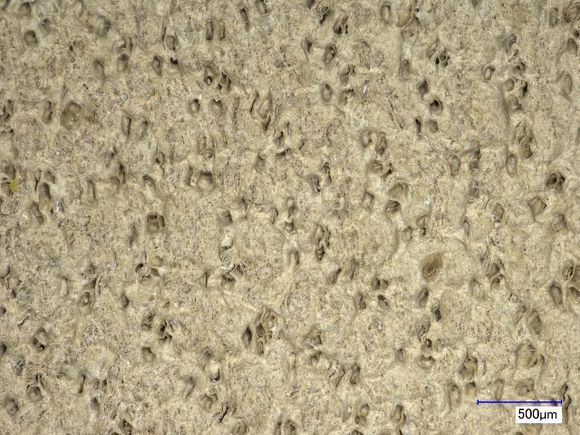 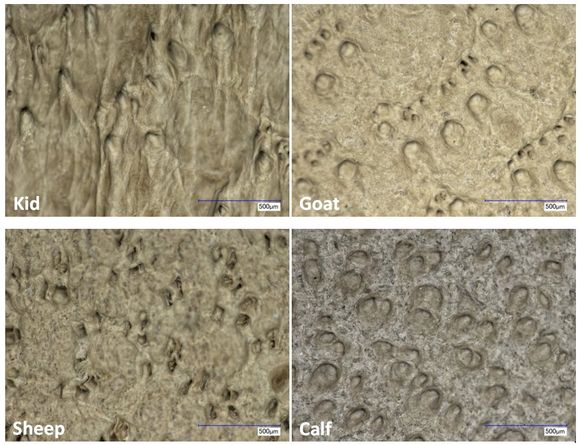 Figure 5: A comparison of parchment follicle patterns from kid, goat, sheep and calf at 200x magnification.

Tanned leather is difficult to shape into a flat and smooth surface free from wrinkles. It therefore quickly fell out of favour as a writing surface, but grew in popularity as a covering material for bookbinding. Leather is sometimes decorated with a worked design such as that seen on the St Cuthbert Gospel, which has a late 7th century binding. The leather cover was stained in crimson on the outer surface and moulded over a designed board while still damp. Tooling and the addition of other pigments enhanced the decoration. Figure 6: Leather as a covering material on the front of the St Cuthbert Gospel. 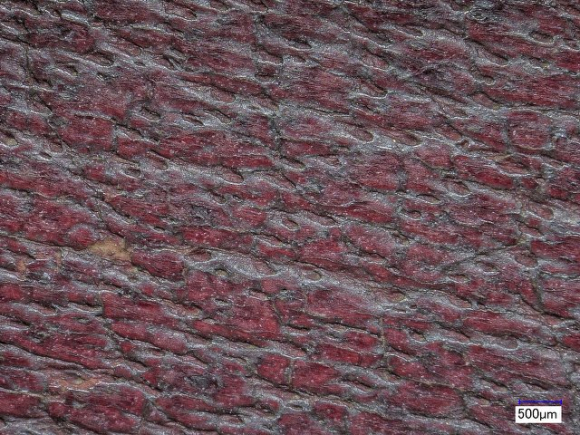 Figure 7: 50x magnification microscopy image of the leather on the back of the St Cuthbert Gospel; can you guess which animal this leather comes from?

Some animal breeders use the density of hair follicles in their promotional material as a means of promoting leather quality, but follicle density is related to surface area and is not necessarily indicative of an animal’s health. It is not surprising that the health of the animal is reflected in the quality of the leather produced. Agricultural improvements in the late 18th century led to larger animals with poorer quality skins. This combined with mechanised production methods and the use of condensed vegetable tannins contributed to leather which later suffered from red rot.

In the red rot process hydrogen peroxide is formed from the conversion of sulphur dioxide to sulphuric acid. Acid deterioration causes fine cracking and the formation of a red/brown powdery surface. The structural integrity is compromised and loss occurs. The powder can also transfer to reader’s hands and adjacent volumes. 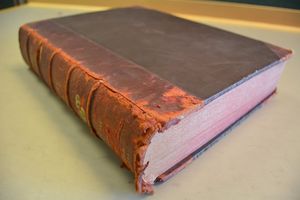 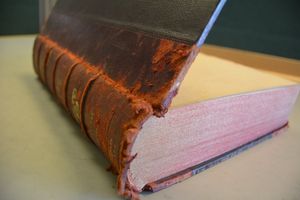 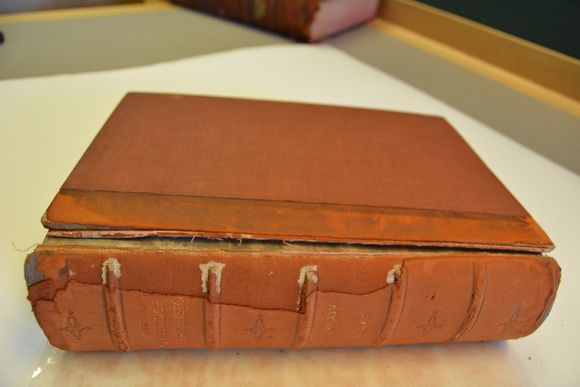 Figure 8: Examples of red rot on leather bindings. Red rot can cause boards to completely delaminate.

Leather binding, although tougher than parchment, still has many of the same preservation needs and should be kept free from fluctuations in relative humidity, light exposure, temperature fluctuations, dust build up and pest attack.

Posted by BL Collection Care at 10:12 AM