From a caterpillar to a butterfly: the story of a rolled Thai painting

When a rolled rectangular panel painting arrived in the studio, it resembled a caterpillar in more ways than one. It was long, brown, spotty and unattractive! One could only glimpse, peering round the edges, the beauty it would become!

Rolled painting revealing far left hand side of image. Depicting trees and a person in the top left corner

Surface damage on the back of the rolled painting

The object before conservation

The painting dated 1850-1880 was acquired at an auction in 2007. When it was first assessed for conservation, it was tightly rolled, and the assessment was based on viewing the exterior of the roll only. However, the curator, Jana Igunma, told us that the painting had been pulled open once for viewing at the auction.

Looking round the edges it was possible to see that the painting was executed in water based paints on a thick layer of gesso and backed with linen. The panel was additionally made stiff by another layer of very discoloured board. It looked as if, at some point of its life, it had been forcibly pulled from that board and the painting, in self defence, curled up into a tight tube! The painting was now waiting to be opened again, but the stiff and acidic ‘cocoon’ had to go first if the butterfly was to be born!

We proceeded with caution, making sure that the cracked paint layers were not damaged in the process. 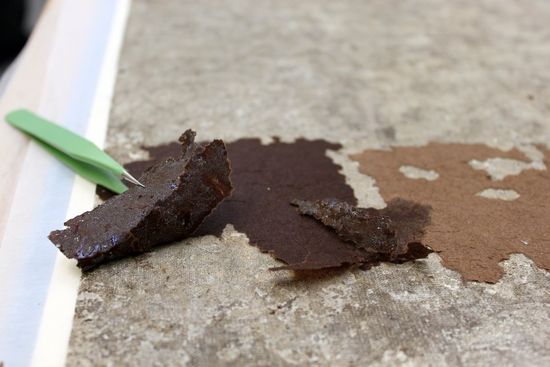 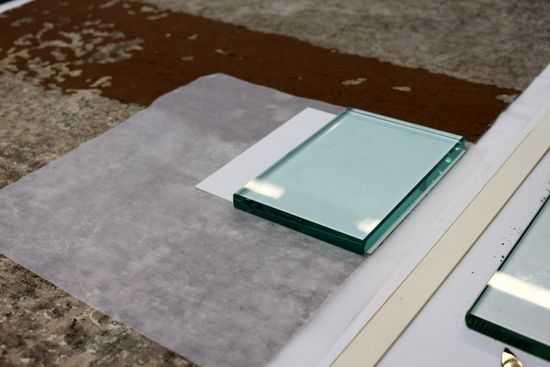 The back of the scroll being pressed with a glass weight, blotter and bondina after the stiff backing has been removed

The backing was gradually removed and then pressed using glass weights

Extensive trials and tests were carried out to determine the most efficient method for removing the backing; only some of the paper could be removed dry with the rest firmly attached. Alcohol and water solution proved most efficient in allowing the gradual removal of the backing without too much penetration of the paint layers, protected additionally by the thick layer of gesso. The paint layers and moisture penetration were checked regularly to see whether there was any indication that the procedure had a detrimental effect on the paint.

The removal of the backing, coupled with gentle pressure applied from the verso, relaxed the painting enough to allow it to be opened gradually. 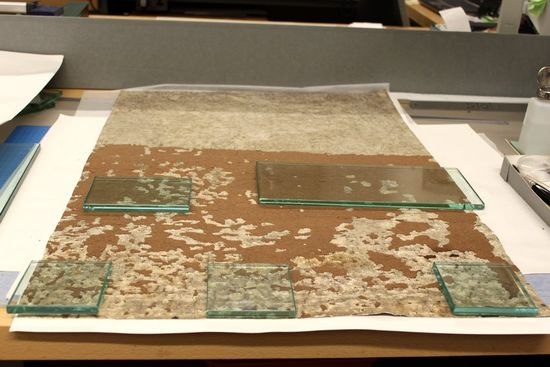 The back of the unrolled painting, which is being lightly pressed with glass weights to flatten the painting

Glass weights were used to press and flatten the painting

When the backing board was completely removed, the paint layers were reassessed. Although the surfaced was covered in tiny cracks resembling a spider web, most of the pigments appeared in good condition; the exception being the white pigment applied on gold. A few small chunky flakes were re-attached using isinglass (fish based adhesive) applied by brush. The most ‘dramatic’ of those flakes involved an eye, as illustrated below! The white on gold areas were additionally consolidated by applying another adhesive as fine mist over the areas. 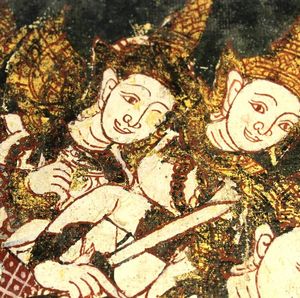 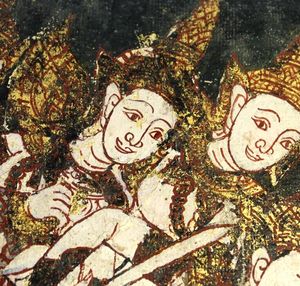 Left: The deity on the left with no eye, and right: the eye re-attached in place

After conservation, the object was hinged onto a lightweight board and boxed. This completed the ‘chrysalis-like’ transformation of the object from a roll to a beautiful painting that can now be fully appreciated! 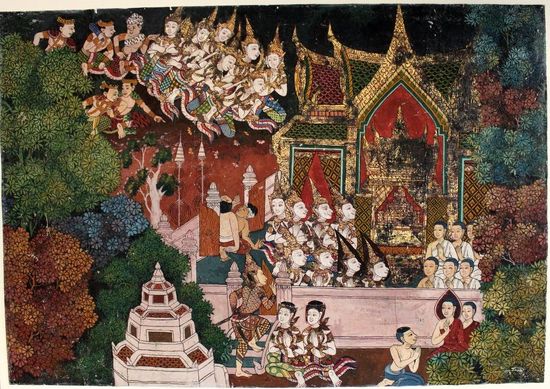 Image of the painting after treatment, flattened it depicts a vibrant scene

The painting after conservation

The rectangular painted linen panel depicts scenes from the life of Buddha, which is a very rare subject in Thai manuscript or miniature painting. The painting style is clearly Rattanakosin (1782 - present) . Similar scenes from the life of the Buddha are depicted on mural paintings in Thai Buddhist temples built during the 19th century. The fact that this painting was produced in order to be framed and mounted on a wall indicates that it was possibly done to cater for Western tastes, and might even have been a copy of a mural.

A more thorough study of the painting now that it can be fully accessed may reveal more than we know about it at present.

I would like to thank Cordelia Rogerson for providing the initial assessment of the painting, Jana Igunma for giving us the information about the object and painting conservators: Nicola Costaras, Audrey Marko, Beatrice Villemin and Odile Hubert, who with their expertise, time and encouragement helped me bring this project to a successful conclusion.

Posted by Christina Duffy at 15:08:08 in Conservation , Materials

Posted by Christina Duffy at 3:08 PM