‘No pigments were harmed in the making of this post’

Conservator Joanna Blackburn reports on the conservation of a large collection of botanical watercolours.

When I was at school, chemistry was not my favourite subject. My young mind hadn’t quite made the connection yet between the inexplicable results I would get from my experiments, and the world I saw around me. So when I decided to become a conservator, imagine my horror when I realised I would have to take a course called ‘Chemistry for Conservators’!

I needn’t have worried though, because I found science so much more interesting when applied in context. And there is nothing more satisfying than looking at the deterioration of a collection item and being able to explain the ‘whys’, the ‘hows’ and the ‘what nexts’.

Below is an example of one of a large collection of botanical watercolours that my colleague, Patricia, and I have been working on over the past six months. The collection comprises of 309 watercolours by Chinese artists, dated to around 1800. Their exact provenance is unknown, but they would have been commissioned by a Western traveller to bring back to Europe. They would have fuelled the popular interest in botany of the time. The collection was received by the Library from the Foreign and Commonwealth Office in 1975. The watercolours are not unusual in British collections, many institutes have similar examples, but the reason ours is special is because the format they arrived in has remained almost untouched. They were inserted loose into volumes of simple quarter leather case style binding with plain cloth sides. Interestingly though they are sewn on three vellum supports which are still good even if the leather and sewing is not. This housing has done a marvellous job of protecting these vivid and exotic watercolours. The vibrancy of the colours has been preserved by lack of light exposure, and the paper is in fine condition. Many of the drawings had little Chinese character labels attached with pins, none of which have been lost, or caused damage to the paper! 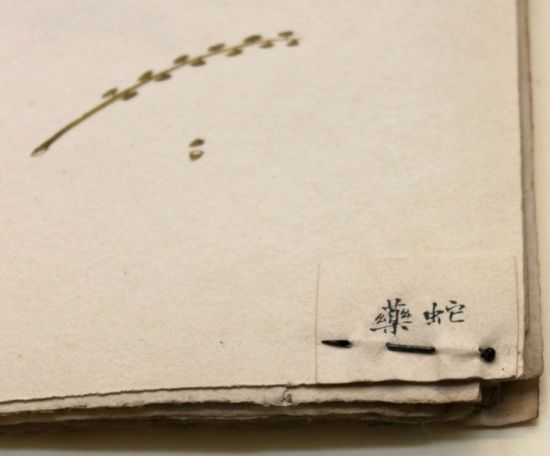 Detail of NHD 53 item 8, example of pins used to attach small labels to many of the watercolours.

In the following image, you can see a close up of the green pigment used to paint many of the leaves of the botanical specimens. 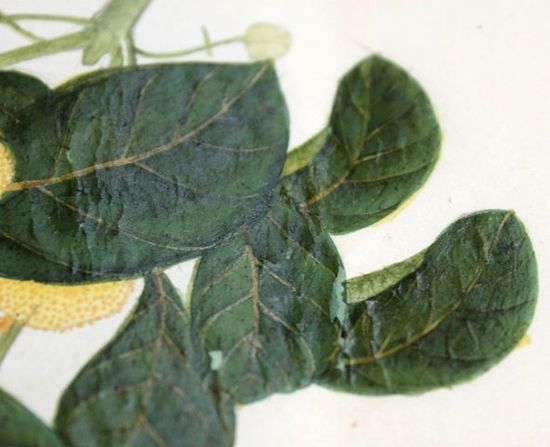 As you can see, the pigment layer has cracked and is erupting into a tent shape along those cracks. So why is this happening to the green when all the other colours are happily bonded to the paper? As you can see from the shiny appearance of the leaf, it appears to have been varnished. This was done with a number of the watercolours to deepen the green of the leaves and to recreate their smooth, waxy texture. Such a beautiful effect has had unfortunate consequences, creating a rigid glassy surface, which is unforgiving if the paper substrate is flexed or expands in humid environments, leading to detachment and cracking of the pigment layer.

So what next? Consolidation of pigments is one of the most challenging treatments carried out by conservators. It is usually done through a microscope because the flakes tend to be extremely small, and it is crucial to choose the right consolidant for the materials involved. Several factors must be considered. Is there a risk that the consolidant will alter the surface appearance? What viscosity does it need to be to be effective? What long term impact will it have on the collection item? After considering all these factors we chose a traditional Japanese adhesive obtained from algae, called JunFunori.

Another reaction that has occurred during the lifetime of these items is the transformation of the white pigment, lead white (basic lead carbonate), to lead sulphide. This chemical reaction occurs in the presence of pollutants such as hydrogen sulphide and sulphur dioxide, and results in greying of the white areas. The petals that you see in the image below are tipped with that grey hue, which is the colour of lead sulphide. 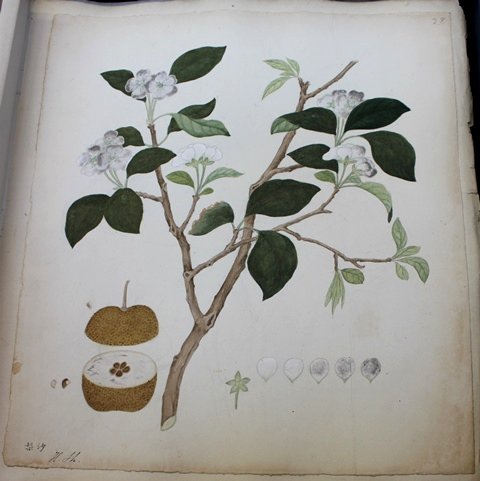 NHD 54 item 28 - An example of ‘blackened’ lead white, a pigment which turns into lead sulphide in the presence of pollutants

There are ways that the conservator can counteract this often unsightly reaction, but it is not a decision taken lightly. The treatment, which involves the use of ethereal hydrogen peroxide, does not turn the compound back into its original state. It changes it, once again, into lead sulphate, a more stable compound.

So the dilemma for the conservator is to balance their duty to preserve the aesthetic value of an object as well as the integrity of the materials that it is formed of. Each case must be considered on an individual basis, and at the Library we have yet to be presented with an item whose criteria justifies this particular treatment. So, these drawings will keep their funny little grey patches as evidence of the materials their creators chose.

The finished article! NHD 53 item 1 in its volume after conservation

This beautiful collection is a prime example of how important it is for conservators to treat these heritage items with a light hand; retaining material in the format it comes to us wherever possible. This involves difficult decisions, and almost every project presents its own dilemmas. And that’s exactly why we do it!

Posted by Christina Duffy at 8:19 PM