The colour red has long been associated with seduction, sexuality and love. It is the colour we use to symbolise the heart, and the colour most in our minds on Valentine's week. Take a moment out from the important work of colouring in your Valentine's cards with red crayons to appreciate the colour itself. Forget about wooing with poems - what could be more romantic than sharing some facts about the colour red? 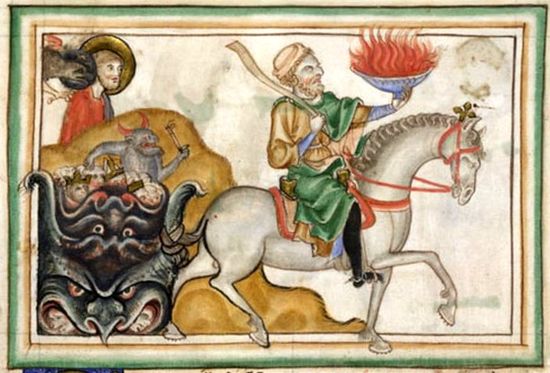 February 14th: The apocalypse is coming. Surprise your loved ones with a beautiful bunch of hand-picked flames. Additional MS 35166 f. 8v

The colour of red ochre comes from the mineral hematite, or iron ore. Red ochre has been found in prehistoric cave paintings and is believed to be the first pigment used by man. 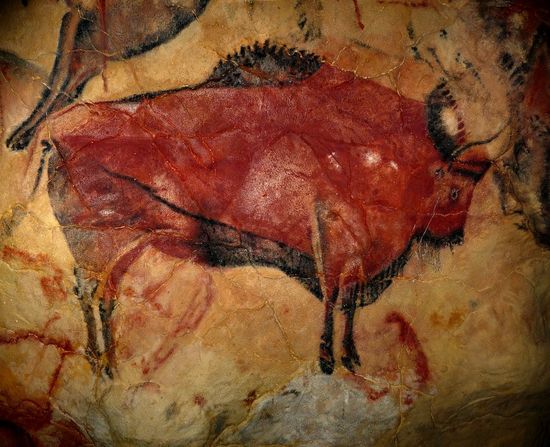 The colour of vermilion comes from the mineral cinnabar which is the ore of mercury. It was used in Roman times and sourced from mines in Almadén in Spain. Due to the highly toxic nature of mercury, many of the miners (who were usually prisoners or slaves) died from poisoning. Vermilion pigment has been found on wall murals in Pompeii and on Chinese lacquerware dating to the beginning of the Song Dynasty. 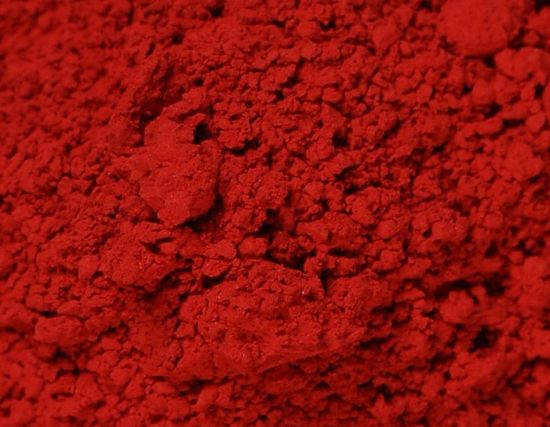 Vermilion pigment made from cinnabar

Madder red comes from the roots of Rubia tinctorum, a yellow greenish flower. This dye was the most common red dye used until the nineteenth century. The first synthetic red dye, called alizarin, was created by German chemists in 1868 to duplicate the red colour of the madder plant. 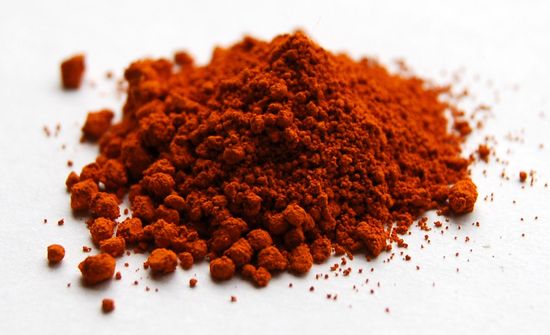 Red lead, or minium, (chemically known as lead tetroxide) has been used since the ancient Greeks. It was prepared by the Romans by roasting lead white pigment. Its use was common and is observed on some illuminated manuscripts at the British Library. 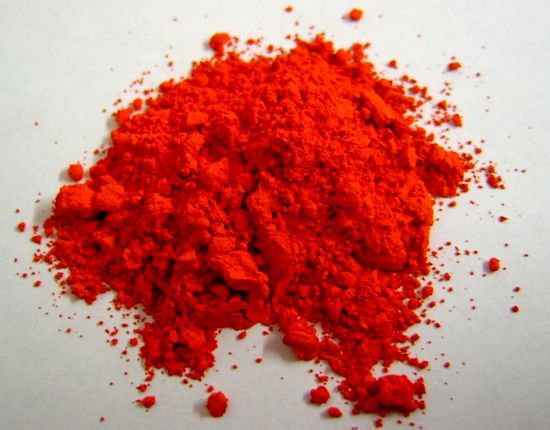 Red lead is found on initials in some gospel manuscripts to heighten the significance of the text. Image attribution: BXXXD at the German language Wikipedia

Lake pigments are pigments manufactured from a dye by precipitating the soluble dye with an inert binder, usually a metallic salt. Red lac (red lake, crimson lake, carmine lake) is a lake pigment used widely in Renaissance and Baroque art. A red sinuous substance secreted by scale insects, called gum lac, was used to make red lac. Carmine lake is made from crushed cochineal insects. This anthropod feeds on the sap of live oak trees and is native to Mexico and South America. Red lake pigments were translucent, and so thin layers had to be built up on paintings. Due to their organic dye composition, lake pigments become unstable and faded when exposed to sunlight. 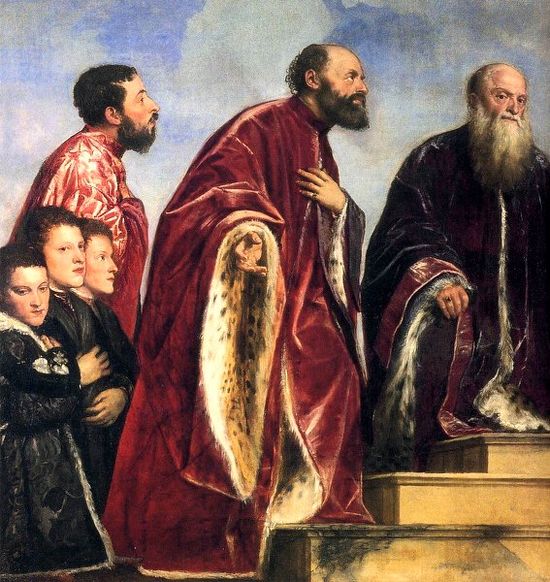 Red lac used by artist Titian, oil on canvas 1540-1545: The Vendramin Family Venerating a Relic of the True Cross

We see many examples of the colour red in manuscripts at the British Library. During the times of medieval manuscript production scribes known as rubricators (from the Latin rubric “to colour red”) were responsible for enhancing manuscripts already laid out and written by another scribe. Rubricators would add titles, chapter headings or instructions not strictly part of the text, but as an aid to separate out components. These additions were known as rubics which can also refer to the red ink or pigment used. Notes in the margins are often seen on manuscripts instructing rubricators where to add the red text. 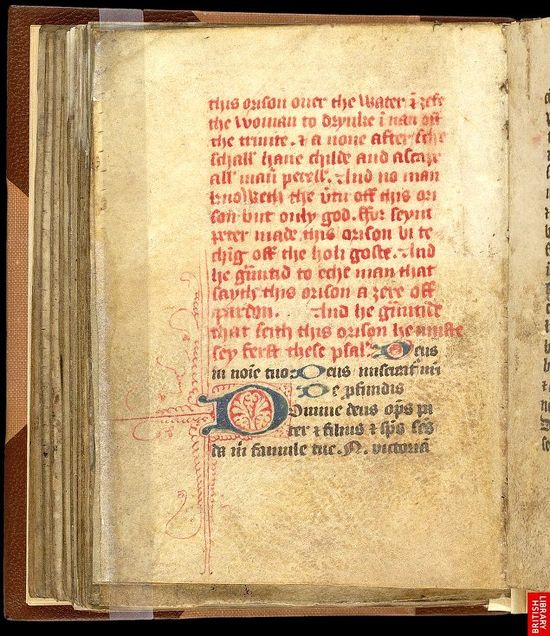 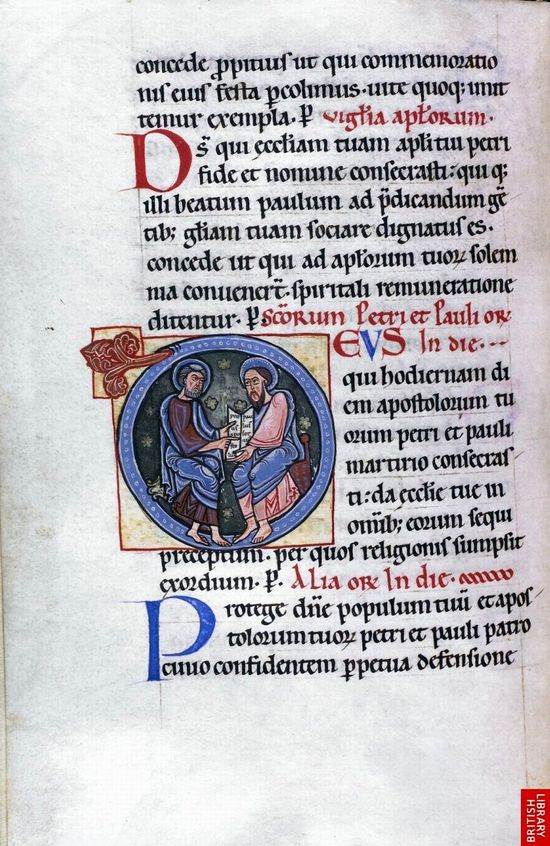 There will undoubtedly be many amateur rubricators in action this week. Take some inspiration from the professionals by perusing the Digitised Manuscripts website.

Posted by Christina Duffy at 1:23 PM