Cleaning and rehanging the Kitaj tapestry

The R. B. Kitaj Tapestry If not, not was rehung in the St Pancras Entrance Hall last Monday night after being removed for intense conservation cleaning. The tapestry is based on the painting of the same name by R.B. Kitaj, and measures 6.75 metres high and 6.75 metres long; it was the largest in the world when created by the Master Weavers of the Edinburgh Tapestry Company for the British Library. The tapestry had not been cleaned since its installation at St Pancras in 1997 and was displaying visible surface dust which had to be removed. The tapestry was taken down on 28 September 2012 by Collection Care staff guided by experts from Textile Conservation Ltd. who would undertake the mammoth task of cleaning at their studio in Bristol. 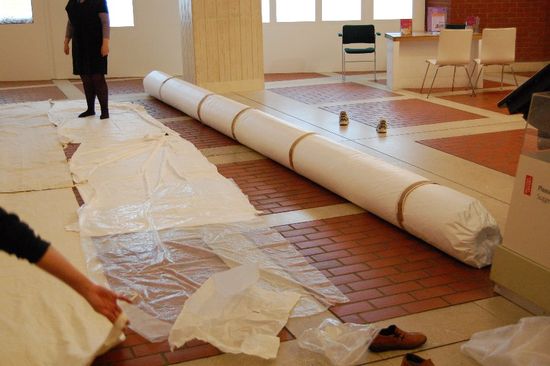 Samples of thread of various colour and locations were removed to monitor fading and colour change in the tapestry. A remarkable eight miles of  warp was threaded vertically between steel rollers during its production. 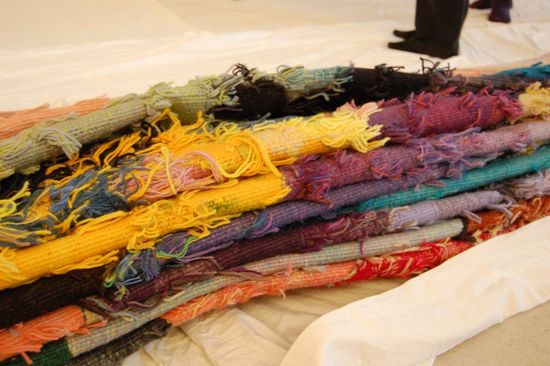 View of the vibrant threads on the back of the tapestry after being removed from the wall.

The tapestry was originally hung using lengths of beige hook and loop fastener. Six lengths divided into three pairs (10 cm apart) were stitched along the top edge. Along the sides were lengths measuring about 55 cm with gaps. These lengths were removed and the turned in sides were released by cutting and removing the stitching. It was here where casings from carpet beetle larvae and degraded moth cases were found. Luckily these were desiccated and no signs of damage were apparent. (Read more about how we deal with pests in a previous post: The Bookie Monster: attack of the creepy crawlies!).

Where to start with cleaning such a huge tapestry? With a hoover of course! The optimum level of suction was determined and the entire front and back surfaces were cleaned using a low powered vacuum suction. The hoover dust consisted of fine dust, brick dust and larger fibrous dirt found mainly on the front. This bag of dust has been retained by Collection Care staff for further scientific analysis. We are very serious when it comes to dust as you may have read in A-a-a-chooo! Collection Care’s Dust Busters.

Once clean it was important to ensure that no insects or eggs remained in the weave. The tapestry was rolled and taken to Harwell Document Restoration Services where it was placed in a freezer unit at -18°C for two weeks. It was fully defrosted over four days and taken back to Textile Conservation Ltd. where a new lining and Velcro hanging system were attached, as well as reinforcement work on any loose stitching. It was then rolled with interleaving layers of tissue and wadding and wrapped in Tyvek and bubble wrap before making its way back home to the British Library.

The tapestry was scheduled to be rehung on the opposite wall to where it was originally placed providing a wider range of viewing angles, and allowing visitors to get up-close to the tapestry on the stair levels. An impressive scaffolding system was erected and new battens were attached to the wall. The tapestry was hoisted up to the top platform after a thorough treble check that it was facing the correct way around! 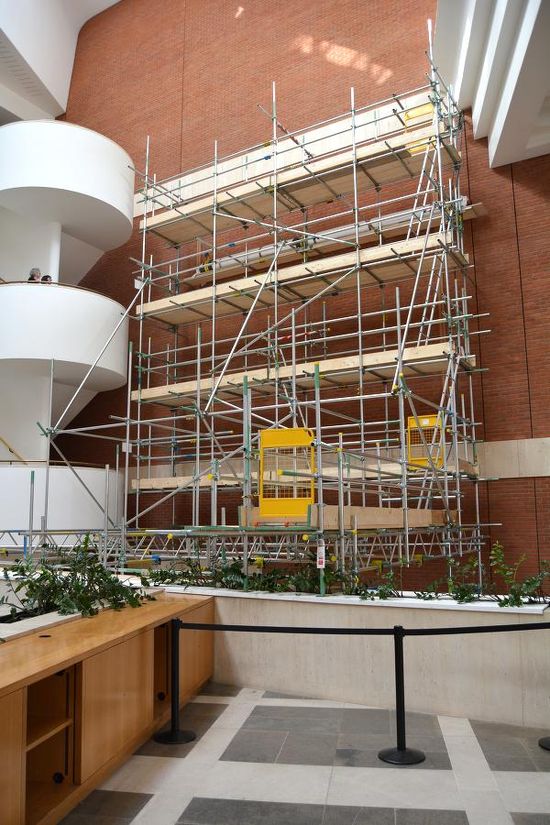 The Textile Conservation Ltd team took the top platform and began by attaching the top Velcro strips to the horizontal battens. 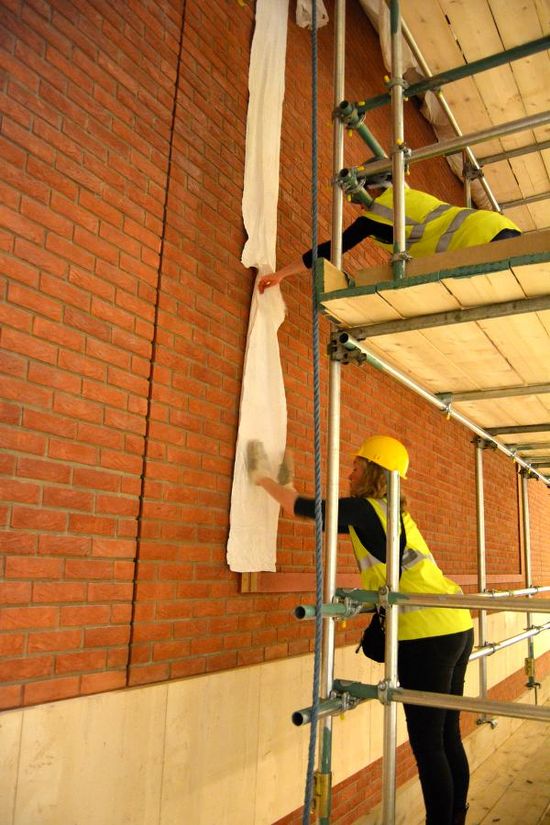 Conservators preparing for the reinstallation of the tapestry

The tapestry was then carefully lowered down in stages by scaffolders. 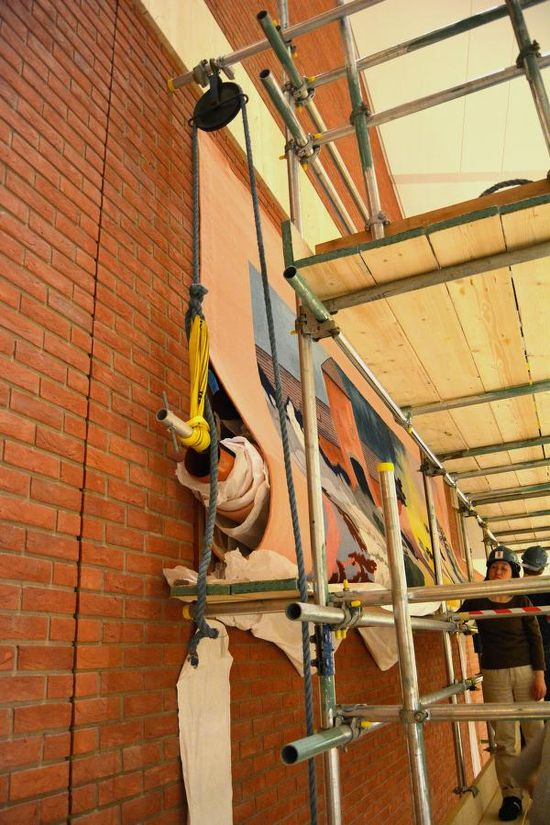 This provided a controlled unrolling allowing Collection Care staff to hook the sides onto the battens without any air gaps. 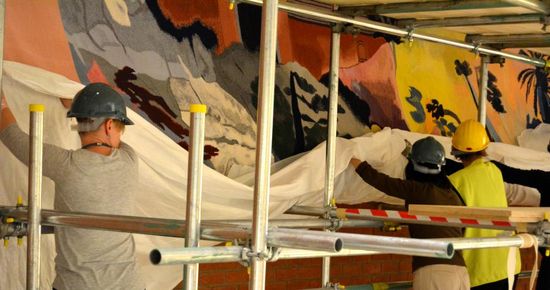 Protective tissue paper was removed as the tapestry was unrolled.

Protective tissue paper was removed as the tapestry was unrolled

When the scaffolding was removed a few days later the final result was terrific! 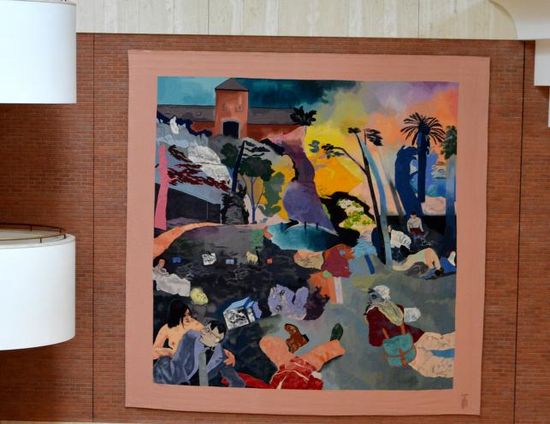 The tapestry has regained its vibrancy of colour and is a magnificent feature in the British Library Entrance Hall. You can read more about the construction of the tapestry in this Telegraph article from 1997, and more about the artist in the National Galleries of Scotland website.

Posted by Christina Duffy at 4:30 PM