CSI at Festival of the Spoken Nerd: I Chart the BL

The show is part of a season of events at the British Library supporting the stunning exhibition Beautiful Science: Picturing Data, Inspiring Insight. 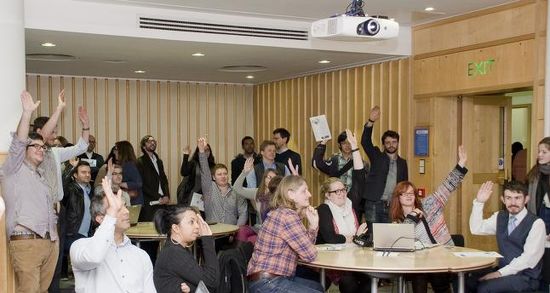 Hands up if you think science is cool!

The show was hosted by stand-up mathematician Matt Parker, geeky songstress Helen Arney and science experimentalist Steve Mould. The hosts were joined onstage by the British Library’s Head of Sound & Vision Richard Ranft who showed the audience some wonderful examples of how animal and bird sounds were historically recorded using musical notation – a lot different to how sounds are recorded today!

Collection Care was represented during the interval by a demonstration of the Library’s very own CSI team – Conservation Science Imaging of course! Audience members tested the contents of their wallets both under the microscope and under a multispectral camera to delve into anti-fraud techniques. The first thing we noticed was that some pound coins had the initials IRB under the Queen effigy, while others didn’t. 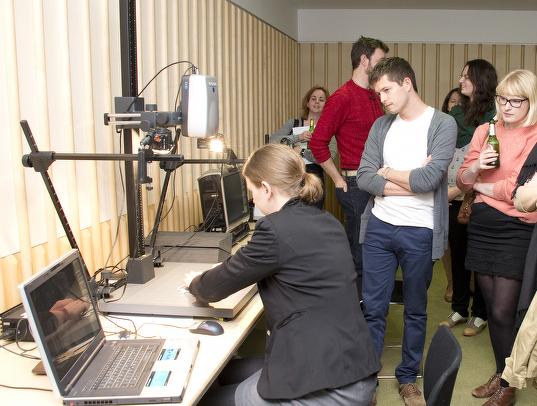 Analysing notes and coins during the interval

The £1 coin below on the left shows a portrait by Raphael Maklouf in which the Queen wears the George IV State Diadem. This design was in use between 1985 and 1997 after which a competition was held by the Royal Mint to design a new effigy. The winner was Ian Rank-Broadly and his design (right) shows the Queen wearing the ‘Girls of Great Britain and Ireland’ Tiara, with a signature-mark IRB below the portrait. To date three different obverses have been used. 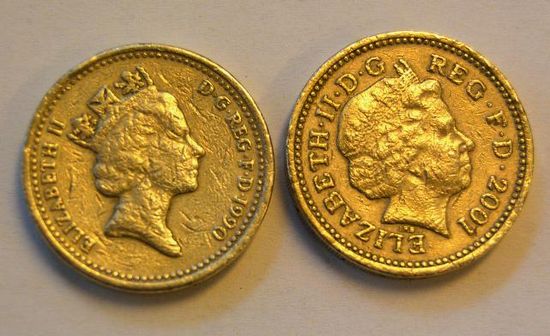 IRB are the initials of the British sculptor Ian Rank-Broadly who has produced many designs for British coinage. The initials are difficult to make out with the naked eye but under the microscope they are clearly observable. Things to look out for in the case of counterfeit coins include date compared to design, edge lettering, quality, and orientation (the designs on both sides of the coin should be aligned when swivelled). 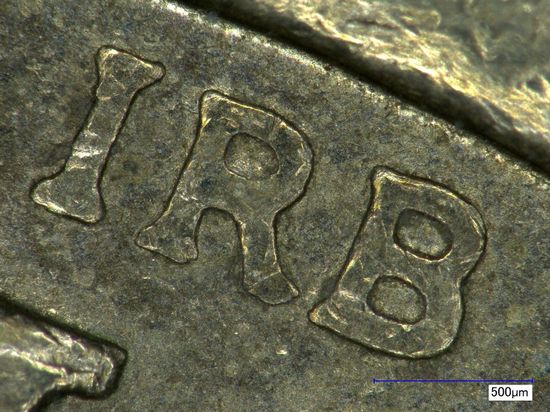 Close up of letters on a coin

“But what about hard cash?” asked one audience member producing a twenty euro note. "To the multispectral camera – poste-haste!" The design on the bank note is created using a variety of inks. Each ink has a unique spectral reflectance and so different parts of the design appear and disappear at different wavelengths as we move from ultraviolet (UV), through the visible (VIS) region and into the infrared (IR) part of the electromagnetic spectrum. Notes which don’t behave in this way are most likely counterfeit. Luckily no fakes were found! 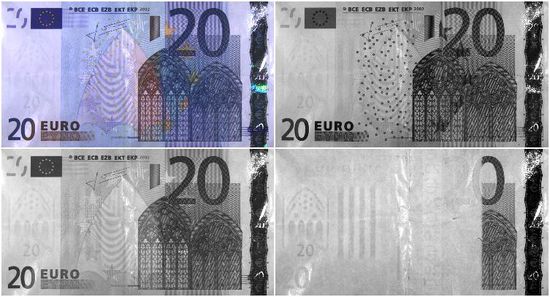 Audience members were also invited to visualise sounds using spectrographs and to participate in a live analogue data collection and visualisation experiment conducted by Matt Parker. 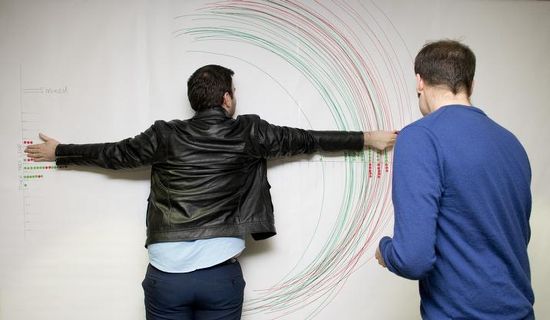 Matt puts his volunteers through their paces in this live experiment

The goal was mapping back-to-back distributions of female vs male arm spans and a fantastic 137 people took part. The Libation Lab (or bar…) was also a huge hit and really made everyone appreciate all those sciency puns.

The night was a huge success and I think we all learned something new - well done to the BL Science Team! You can read more about their experience on the science blog.

Visit the Beautiful Science: Picturing Data, Inspiring Insight exhibition until 26 May 2014 in the Folio Society Gallery for free.

Posted by Christina Duffy at 2:50 PM