After a glorious week of studying European Bookbinding (1450-1820) at the London Rare Books School with Director of the Ligatus Research Centre, Professor Nicholas Pickwoad,  it quickly became apparent that works of art have been one of the best methods of recording details of techniques used in bookbinding.

The majority of books throughout history are not the heavily decorated and spectacular versions we tend to hear most about, but instead are plain, and fairly ordinary book blocks (which some people still find quite exciting - author included!). For this reason, the techniques are perhaps not as well understood or documented. Luckily the keen eye of the artist has captured precise details when depicting books throughout history, showing sewing structures, stitch types, supports, covers and even how they were stored. In this post we will look at some examples of books depicted in art.

While we now consider spine outwards as ‘the right way around’ to display books, this was not always the case. In the oil on canvas painting ‘Portrait of Lawyer Francesco Righetti’ by Guercino (1626- 28) we see doctor of laws Fracesco Righetti depicted in his library. His law books are tail-edge outwards showing endband detail with titles written on the volume. 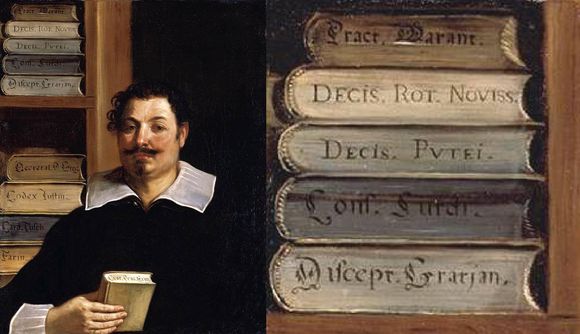 The engraved ‘Portrait of William Cartwright’ (from ‘Comedies, tragi-comedies, with other poems’) was printed in London for Humphrey Moseley in 1651. Cartwright is shown wearing a collar and gown leaning on an open book. The books on the wall behind him are shelved fore-edge out; a common practice in the 16th and early 17th century. Gilded-edge books stored spine away would gleam off the shelves quite spectacularly. Many medieval books have their title written in several places such as the spine, tail-edge or fore-edge as storage locations changed over time. 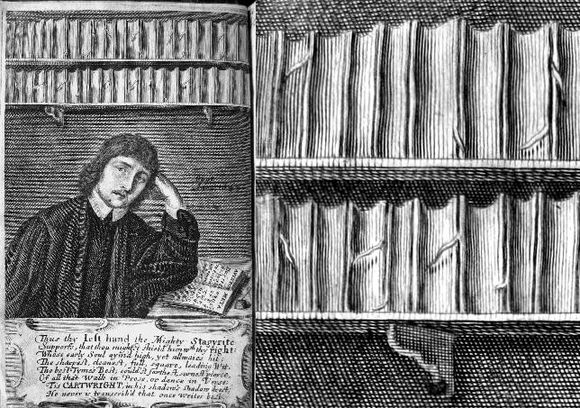 Hendrik de Haas’s print ‘De Boekbinder’ (1806) shows a bookbinder's workshop. On the left is the beating stone where gatherings were pounded with a mallet for compaction. Second from the left a man is shown bent over a special shaving knife which is drawn along the text block to trim the pages. The shavings are shown on the floor. In the centre on a stool a binder is sewing the gatherings next to a young boy taking a book to a client. The master of the workshop (as determined by his smart attire and rather dashing wig) burnishes the leather by working and smoothing it. The finisher, working for the aristocracy, made more money than the binder – it is unusual to see him wearing Hessian boots. (With tassels? On a binder? The outrage!) 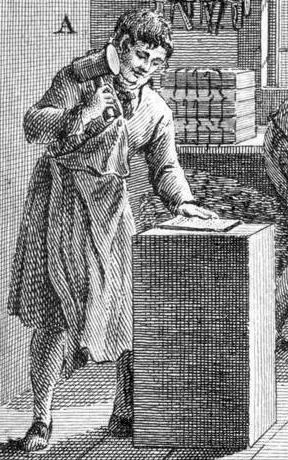 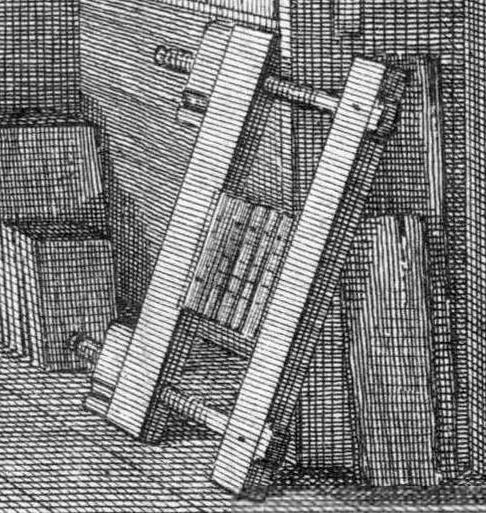 Leaning against the shelving unit in the far right is a wooden book press where several books are packed tightly. It was possible to apply guilt edges to several books at a time when stored in this way.

Dutch painter Marinus van Reymerswale’s early 16th century oil on canvas painting ‘St Jerome in his Study’ shows St Jerome surrounded by curious objects which represent attributes referring to his life and status. St Jerome was famed for translating the Bible into Latin from Greek and Hebrew. The Vulgate, as his translation was known, became the official Latin version of the Holy Script in the Roman Catholic Church. For this reason he is nearly always depicted around books and in his study.

An expensively bound volume with clasps is shelved behind St Jerome, while on his table are several working copies with various sewing structures and tacketed bindings. A sewn book block is apparent which never had covers, adhesive, or a spine lining. The gatherings are visible with long stitch through separate supports rather than covering the whole spine. There is no adhesive used in long stitch bindings, making them very useful for music manuscripts as the book stays open easily and is very flexible. Long stitch was rare in England but common in the Low Countries as a cheap and quick way to produce almanacs. The variety of books in his study suggest St Jerome was highly-literate with a great depth of knowledge. 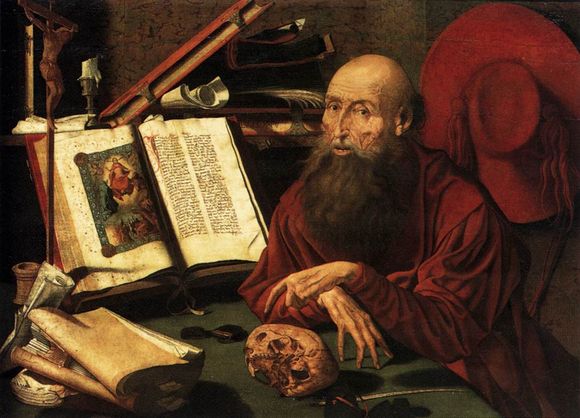 Textblocks could be sold without significant covers, just held together with an "endless cover". Jean Antoinette Poisson (Madame de Pompadour) was the mistress of King Louis XV, as well as a prominent patron of Francois Boucher. In Francois Boucher’s 1756 oil on canvas portrait ‘Madame de Pompadour’ the lady is sumptuously dressed and surrounded by opulent things - apart from the book she holds in her hand. The book has a drawn-on cover – a piece of paper or parchment put around the book-block. It was a cheap and quick way to bind books and there are a lot of French books bound in this way. Madame de Pompadour is displaying a casual relationship with literature, in a sense saying to the viewer ‘Look at me, I read books because they are interesting. If I like it, I will keep it” (and pay more money for the binding!). 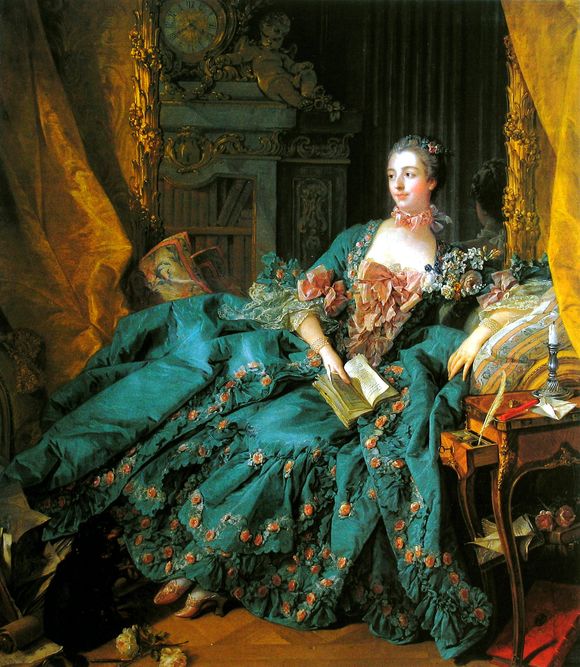 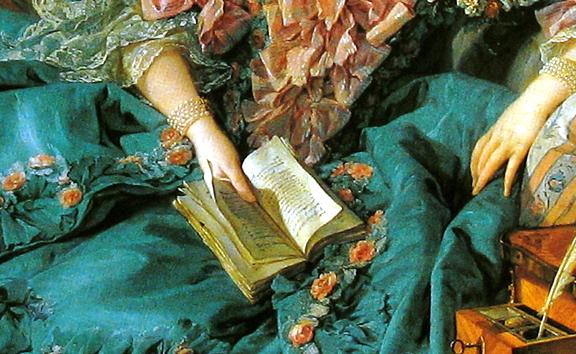 Figure 9: Francois Boucher’s ‘Madame de Pompadour’, 1756, oil on canvas portrait. The book has a drawn-on cover – a piece of paper or parchment put around the book-block.

'Bealux abc belles heures’ is part of the ‘le Cris de Paris’ genre illustrating Parisian street vendors. It is a woodcut engraving ca 1500 showing a moment in time when prayer books, once restricted to the wealthy aristocracy, became affordable to the bourgeois with the advent of the printing press. Thin, printed copies were sold on the streets. In the vendor’s right hand is a Book of Hours showing a limp cover. Underneath his left hand we can see detail of a leather binding. 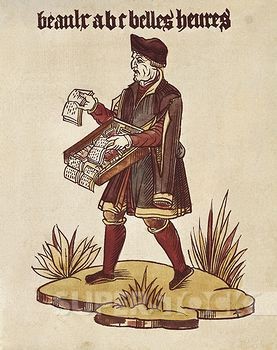 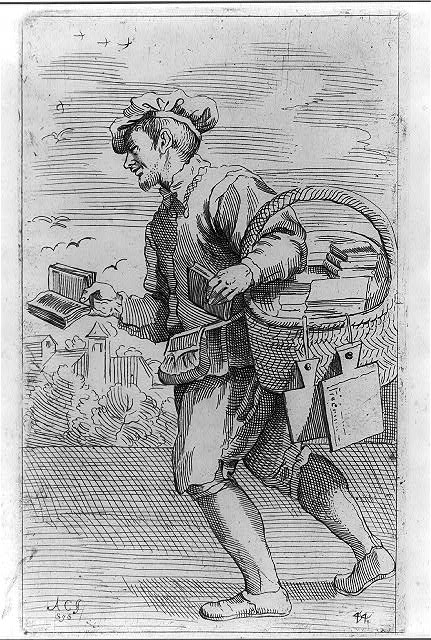 Similarly in Annibale Carracci’s 1646 print ‘Tavolette, e Libri per li putti’ a man is depicted selling books from a basket that he carries over his shoulder. The book in his right hand has a cover which follows the spine when open and is bound using long-stitch.

While written documentation of binding styles and techniques is not always available, we can gather a lot of information from paintings, prints, engravings and illuminations. Sometimes they can tell us more than current literature on a subject – for example in Lorenzo Lotto’s oil on canvas ‘Portrait of a Young Man in his Study’ (c. 1530), the sitter is more likely to be a merchant than a student as the volume he is perusing is bound with a fore-edge flap – this style was used for account books and book-keeping, not for great works of literature. 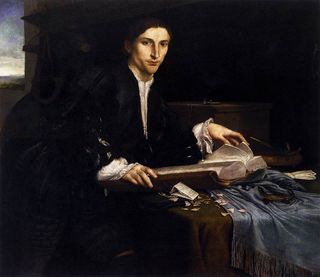 Visual depictions can also be useful in filling in missing parts of our understanding. Folio 291v of the great 9th century illuminated gospel manuscript, the Book of Kells, shows Christ holding a red binding decorated with blind twilling. With the original binding of the manuscript now lost, it is possible that this is what it may have originally looked like. 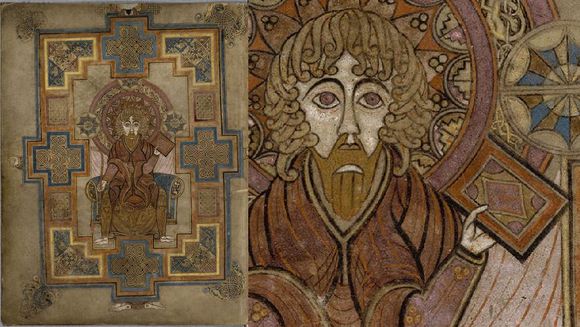 Figure 8: The Book of Kells, f. 291v; a 9th century gospel manuscript containing the four Gospels in Latin based on the Vulgate text which St Jerome completed in 384AD. It has been fully digitised by Trinity College Dublin.

While bookbinding may be considered the Cinderella of the bibliographical trade (i.e. given little care or attention) it is a fascinating area of research, based on the logic of commerce – techniques and styles were not varied unless they needed to be. For more information on bookbindings see the British Library Database of Bookbindings or the Ligatus website.