The valedictory symposium of this year’s Material Witness was recently held at the Art Workers' Guild, London. Material Witness is a programme for post-graduate Humanities researchers investigating the place of objects and first-hand experience in scholarship in today’s digital world. One of the papers by James Alexander Cameron, who is completing a PhD at the Courtauld Institute on sedilia in English churches, particularly brought out the importance of embracing both digital and physical study of objects, as we do at the British Library. 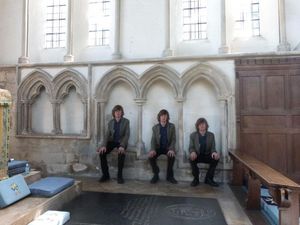 Sedilia are the seats by the altar for the use of the priest, deacon and subdeacon celebrating Mass. In English churches they often take the form of three stone niches, built into the wall of the chancel. My research has shown they seem to be largely, but not exclusively an English phenomenon, becoming common in the thirteenth century and reaching their height of popularity in the early fourteenth century.

I have amassed a database of all the sedilia in England using the Pevsner Architectural Guides, supplemented by hyperlinked images gathered mainly from the website Flickr. There are over 1,300 items in my database, 800 being what I dub the so-called “classic” sedilia: the set of niches set in the thickness of the wall, surmounted by arches and divided by columns or shafts.

So in many ways my thesis is made possible by the new phenomenon of mass public-domain photo sharing, such as the British Library has recently begun. I also try to share my rather pedantic pictures of churches and their furnishings on Flickr as much as my time allows in the hope someone else might find something in them as useful as I found the pictures of sedilia. 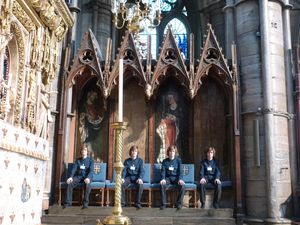 But I am quite eager to use not just my hands, but my whole body in my research. Very few sedilia have as luscious sculpture as those of the 1320s in Heckington church (Lincolnshire), microarchitectural canopies as fantastic as Exeter Cathedral or painting as top-whack as Westminster Abbey. The vast majority are just niches in the wall, more common proportionally in ordinary parish churches than cathedrals. There are rarely ever any signs of use in the form of traces of fittings such as hanging fabrics or cushions. It seems that quite simply, clergy sat in them during the points of the service when they weren’t doing anything else. 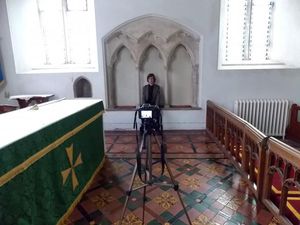 So that’s what I do: I sit in them, with a tripod on a timer for three exposures 2 seconds apart. And then I make a montage of the resulting pictures when I get home. I have around 130 of these montages, which means I have sat in around 10% of all the sedilia in England (possibly sounds slightly more impressive than it is). 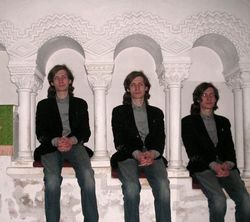 This isn’t just a completist mania, as from the first time I did it (to be quite honest initially as the one-off gag everyone thinks it is) at Castle Hedingham in Essex back in 2011, I realised what an extraordinarily useful way it was of recording the scale of sedilia. Because even though they generally look very similar, sedilia come in such varied shapes and decorative forms, to gather their dimensions in any meaningful way with a tape measure would be nigh-on impossible. And to see at a glance the claustrophobic niches at Castle Hedingham, made me realise that although the current carving is 1873, you can see the traces of the original twelfth-century arches that they were placed inside of, resulting in their uniquely cramped proportions. Since then, unless the sedilia are stuck behind an immovable object, I’ve done this shot. 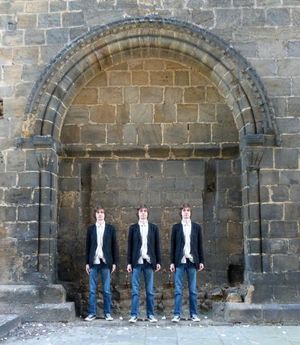 Seeing the scale at a glance is important, particularly for some of the earliest sedilia that do not have the demarcated niches, such as the Cistercian Abbey of Kirkstall near Leeds, probably built in the late 1150s. The austere Cistercians were a bit weird among the other great monastic abbeys at this time for just having chancels with blank walls around the altar: most orders would have aisles all the way round: the arches of which would be useful to put a bench between for the ministers of the high altar. When you actually visit Kirkstall, you see that the sedilia niche, one of the earliest in England, is much higher than it needs to be, and that the builders are actually creating a false bay of an arcade for the clergy to sit under, rather than the more identifiable genre of “classic” sedilia that came along later. And then those sedilia at Heckington, often pictured in books on parish churches for their wonderful sculpture of everyday life and extraordinarily well-preserved Coronation of the Virgin, but if you sit in them you can demonstrate how high up this sculpture is, and how the men in the seats were not the primary audience of it. Instead, the Coronation of the Virgin represents Christ’s charge to Mary as Ecclesia, the representation of the Church, and interacts with the bodies below as a visual ensemble of the Church Militant on Earth and the Church Triumphant in Heaven.

See more about my project at my page on the Courtauld website, and how you can help by sending in my missing sedilia.

The Courtauld Institute of Art