The Ramayana – “Rama’s journey” – is one of India’s oldest stories having first being written some two and a half thousand years ago. It follows the hero Rama from his birth and childhood in Ayodhya to his exile in the forest where his wife Sita is kidnapped by the wicked (and ten-headed!) demon king Ravana. With his valorous brother Lakshmana and helped by an army of monkeys and bears he leads the search for Sita, finally rescuing her from Ravana’s stronghold in Lanka. It is an epic story embodying the Hindu idea of dharma (duty). There are several thousand known surviving manuscripts and many different versions of the story across Asia. The Mewar Ramayana is one of the finest copies of the work, lavishly illustrated with over 450 paintings in large format. Recent digitisation by the British Library in partnership with leading Indian institutions has reunited the long-separated text and it can be viewed online featuring an introduction including links to contextual documents and high resolution images in ‘Turning the Pages’ with descriptive text and audio. 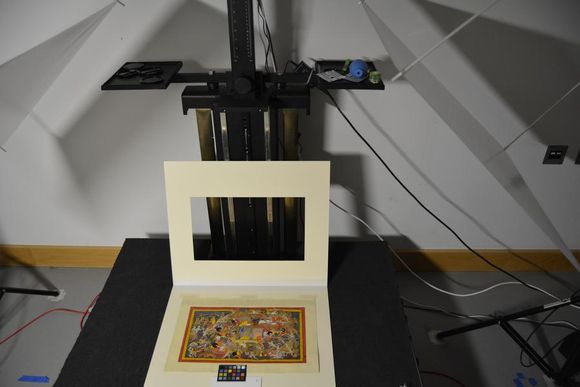 We recently examined two paintings from the Mewar Ramayana using multispectral imaging to investigate the methods and workflow of the artist. Images are captured over fourteen spectral bands from the ultraviolet (UV: 365 nm) to the infrared (IR: 1050 nm) revealing information about underdrawings and techniques that can’t be seen under normal light. The two full page paintings are illustrations from Book 6 (Yuddhakanda, Book of war) of the Mewar Ramayana manuscript.

Book 6 fol. 27r depicting the siege of Lanka in colour, ultraviolet, infrared, and blue light with an orange filter. Rama’s army of monkeys takes control of the four gates of the city as the ten-headed Ravana leads the defence after consulting his ministers.

Book 6 fol. 27r: Rama’s army of monkeys and bears hurl stones at their enemies. White pigment, possibly added as a later touch up, is observed under ultraviolet light on the elbows, arms and tails of the attacking monkeys.

Book 6 fol. 27r: Colour, ultraviolet, infrared sequence. In front of the gates to Lanka, a man struggles with a monkey. Under ultraviolet light the rough application of paint is evident on the man's hand where no attempt is made to stay within the lines. In the infrared image, the guidelines used to initially draw the figure (chest, back, elbow) are observed.

Book 6 fol. 27r: An archer fends off the monkey army. Incorporating high levels of detail in these paintings often led to a change in design layout. In the painting the archer is shown to be sitting cross-legged on the cart, but in the infrared image he is standing. The late addition of the cart is evident by the over painting of the wheel in order to indicate its attachment to the main frame of the cart. Other alterations were made such as the size of the soldier's orange foot in the top left, and the painting over of an isolated monkey tail on the horse's body in the bottom left.

As the battle escalates Rama’s brother Lakshmana is seriously wounded by a spear. Hanuman the monkeys’ army general is sent to the Himalayas to pick up medicinal herbs.

Book 6 fol. 142r: Colour, ultraviolet, infrared sequence. Rama’s loyal brother Lakshmana is seriously wounded by a spear. In the ultraviolet image we can see touch-ups on the hands, arms and legs of the two monkeys trying to take the spear off Lakshmana. Under infrared light we can see underdrawings of the far left monkey who was originally positioned higher up.

Book 6 fol. 142r: Colour, ultraviolet, infrared sequence. In the ultraviolet image alterations to Rama’s clothing and the direction of arrows is observed. Under infrared light, the boat at the top of the painting with the three figures is shown to have been altered. It may have started out as a representation of deities in the sky similar to those seen in Mughal Mahabharata (Razmnamah) Or. 12076 f.76r. Other arrow positions have also changed.

Book 6 fol. 142r: In the infrared image, a different position for the ten-headed Ravana is shown to the right, where a single face in profile is revealed adjacent to a vertical line. This is completely obscured by the green pigment which we now see.

Multispectral imaging has proven a wonderful technology in allowing us to study collection items in new and exciting ways. These are just some of the observations made and we hope to share more in the future.