In our last Adopt a Book conservators post, we introduced conservator Kim Mulder who has a special interest in large paper objects. Now, meet book conservator Rick Brown who joined the Library as an apprentice in 1984 and has been involved with the Adopt a Book scheme since it first began.

I was taken on under an apprenticeship scheme which consisted of being taught by a journeyman (mentor) and attending a day release City and Guilds course at the Elephant and Castle London College of Printing.

In those days there was no such thing as a book conservator as the role was split into four disciplines; sewing, paper conservation, binding/box making and finishing (gold leaf lettering).

I was extremely lucky to be trained at the British Library (British Museum) at that time as the conservators, binders and finishers there were some of the most skilled in the profession. I have nothing but good memories of working with these people and I owe them so much.

We now undertake a minimal intervention approach; we conserve and repair just enough without removing any features of the item’s historical past. To do this you need to be fully skilled in all disciplines. Alongside scheduled work to treat items, we also undertake a programme of running repairs where items which have been identified as needing minor repairs come into the studio and are repaired in less than ten hours. One of the running repair items I’ve worked on is The Secret Garden (1911).

Watch Rick making repairs to The Secret Garden in this video about supporting the Library’s conservation work.

I have been involved in the Adopt a Book scheme since it first began; where a group of school children came to the Bloomsbury bindery for a visit and after seeing the work that was being carried out suggested that they fundraise for a particular book to be conserved. It was thought to be such a good concept that it was advertised as a gift idea. I remember seeing adverts for Adopt a Book on tube stations and inside tube train carriages. Books were conserved for the Adopt a Book scheme by all conservators until it was decided in 1998 to have a dedicated Adopt a Book team, for which I became manager.

Adopt a Book works in a different way now to when it started. The program now supports the work of our conservators rather than funding for an individual book to be repaired. This is a more sensible approach as it helps the future of conservation at the British Library and manages to conserve more items in the process. 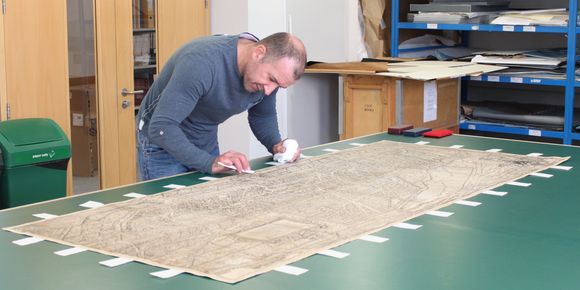 Rick working on one of the maps in our collection.

From a memorial to a loved one who read a particular book to their children, to readers who used a book consistently whilst researching at the Library; I am still touched by some of the stories I hear for the reasons why people adopt books.

Posted by Christina Duffy at 5:13 PM