With the recent multispectral imaging of the burnt Magna Carta hitting the headlines following our blog post on the 800 year old Magna Carta revealing its secrets, there has been a lot of interest in the conservation work required to protect such items. The so-called “burnt” Magna Carta (Cotton charter xiii 31a) suffered fire damage in Ashburnham House in Westminster on 23 October 1731. This 1215 exemplification formed part of an exquisite library assembled by English antiquarian Sir Robert Cotton during his lifetime (1571-1631). Cotton’s library forms the basis of our collections at the British Library today, and a recent conservation survey of the burnt material has allowed us to categorise items based on their relative condition, enabling us to immediately identify items suitable for digitisation. This has vastly improved our workflow allowing digital access to a wider audience in a shorter time. 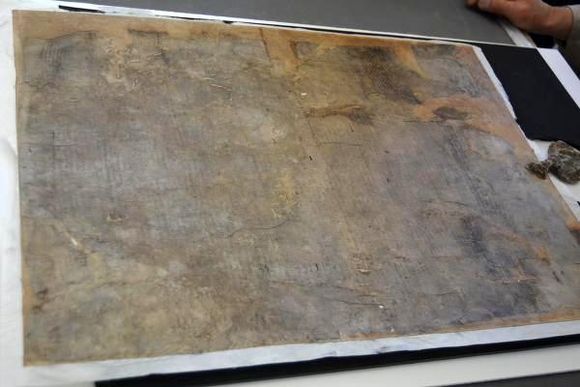 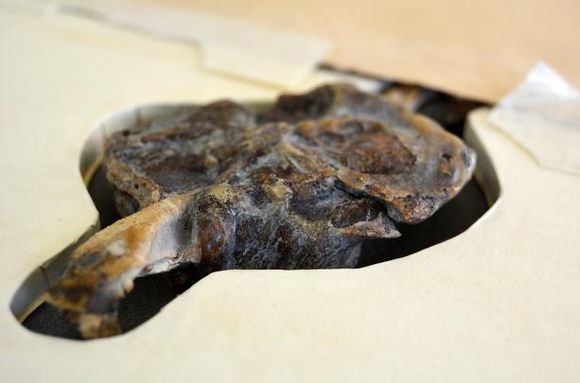 The burnt 1215 Magna Carta suffered fire damage and subsequent interventive treatment. The vulnerable wax seal of the charter melted and distorted in the intense heat.

In the Ashburnham House fire a quarter of the manuscripts were either damaged or destroyed in the blaze, and attempts to extinguish it exacerbated that damage. The documents suffered shrinkage and distortion, bindings were carbonised, ink was lost, soot and dirt was ingrained, tide marks formed on the leaves, and parchment (animal skin) gelatinised. Gelatine is the brownish end-product of a rapid degradation of parchment collagen. Remedial work caused further damage with many of the manuscripts broken up and rebound during salvage. Incorrect reassembly impacted on the codicological history of many of the manuscripts. The darkened gelatinous material which formed along the edge of the parchment was trimmed away from some manuscripts. Unidentified fragments were gathered and put into drawers.

The collection was untouched until the establishment of the British Museum in 1753, where over the coming years invasive treatments were recorded. To separate the leaves which had glued together by gelatinisation, about 40 manuscripts were immersed in a hot aqueous solution (likely to be ethanol in water). Incisions along the parchment edges were made to allow the leaves to dry flat under pressure. Despite the efforts, leaves remained brittle and fragile. Inlaying of parchment fragments into paper was completed in 1856, but a huge number of fragments remained loose and unidentified. While the edges of loose fragments were protected by this inlaying method, over time the degradation of materials caused further concern. The brittle fragments were susceptible to break with every page turn, and acidic paper in heavy volumes tended to cockle preventing the volumes from closing. 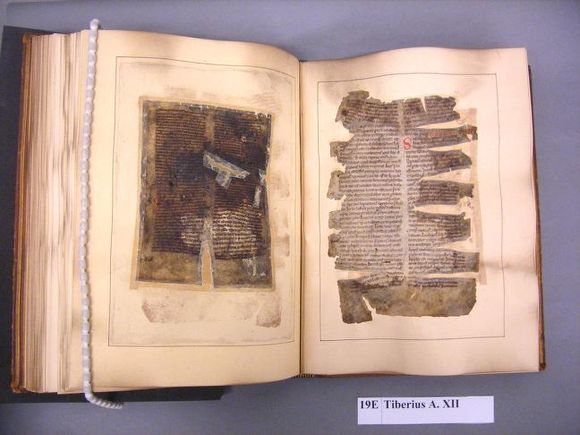 Cotton Tiberius A. XII. Parchment fragments were attached to paper in the nineteenth century and incisions were cut along the sides to allow the leaves to lay flat.

Our conservators surveyed 243 items from the Cotton Collection, including 21 paper manuscripts. Items were graded on their physical, chemical and overall conditions based on an assessment of the state of the binding and parchment substrate, and thus rated for treatment priority. 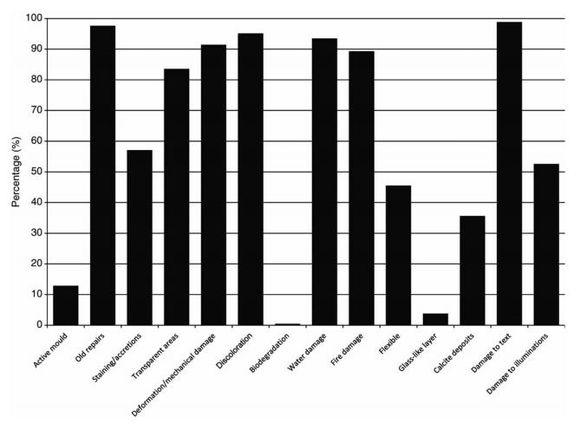 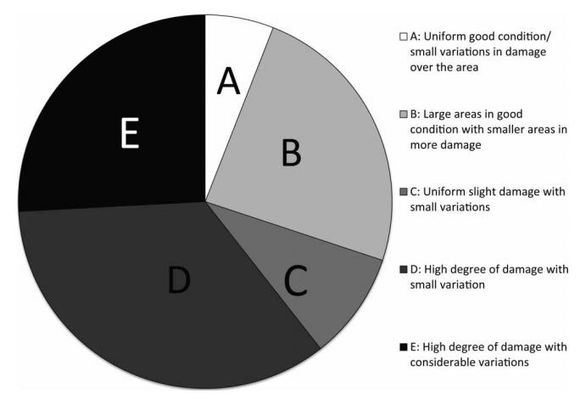 Pattern of damage where D (High degree of damage) accounts for 61% of the total items examined. From Figure 2 and 5 in The conservation of the burnt Cotton Collection in the Journal of the Institute of Conservation, 2013.

The nineteenth century treatments have been fundamental to the preservation of the Cotton Collection, and many items thought to be lost have since been rediscovered. The condition survey enabled us to quantify the damage and develop a strategy for the long-term preservation of the burnt Cotton Collection. Items identified as being fragile were immediately withdrawn from library use, while research to determine the best methods of stabilising and housing the items was undertaken. The use of analytical techniques such as near-infrared (NIR) spectroscopy for assessing the deterioration or parchment has enabled a better awareness of the nature and condition of these manuscripts. This information has helped to support the choice and realistic scope of conservation methods. In the case of the burnt Cotton Collection, the future project is now directed towards a preservation approach, including digitisiation and multispectral imaging, rather than an interventive conservation one.

‘Their Present Miserable State of Cremation' the Restoration of the Cotton Library, Andrew Prescott: http://www.uky.edu/~kiernan/eBeo_archives/articles90s/ajp-pms.htm

I'm so very glad to hear of this initiative, and the prospect of being able to access more of these manuscripts online in future!