Two Hebrew manuscripts in their original bindings came to the conservation studio as part of our
conservation program. Both texts contain the work of Abraham bar Hiyya (d. 1136) who was a medieval Spanish philosopher, mathematician and astronomer.

Little is known about bar Hiyya’s life except that he lived in Barcelona. Although there are points of similarity with other medieval thinkers, his writings contain a mixture of Neoplatonist, Aristotelian and Rabbinic ideas, with original interpretations. He was often quoted by later authorities and accepted as authoritative. There was often no distinction between astronomy and astrology in medieval Spanish or Latin text. Astrology was consulted for such things as births, journeys, business and weddings. Abraham was the foremost scientific authority in Spain at this time and he was a firm believer on this aspect of astrology. Many of the terms invented by Abraham have remained current in scientific and mathematic Hebrew to the present (1). 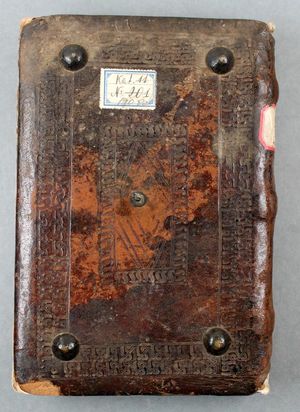 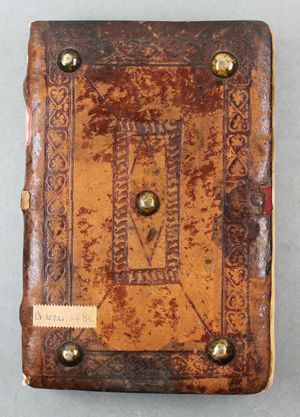 The first text was written by Abraham bar Hiyya and was one of the first Hebrew texts on cosmography. It is a short review of the ‘lands according to the seven climates’ - the chief source of geographical knowledge among the Jewish community at the time. Abraham bar Hiyya theorised that the Earth was at the very centre of the universe despite conflicting contemporary knowledge. The second text is a translation into rhymes of Bishop Marbod’s text (c.1090) ‘Liber Lapidum’- a tract on the medical and mystical qualities of precious stones. This text also considers astrological principles and the relationship between geology and the positions of heavenly bodies. The third (ff61v-62r) describes the restorative properties of the eagle.

The manuscript is written in iron gall ink and is attributed to a scribe who worked in Italy named Joseph ben Se’adyah Ibn Hayyim.

Or 10538 is a manuscript copied in Italy and dates from approximately the 14th or 15th century. It contains two treaties on astronomy and the Jewish calendar Sefer ha-Ibbur by Abraham bar Hiyya and Sod ha-‘Ivin by Yosef ben Yehudah Hazan. 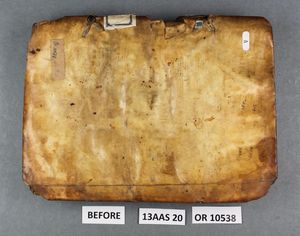 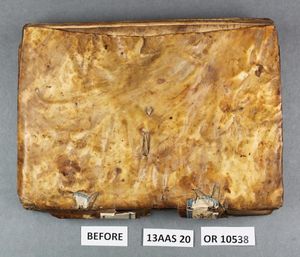 This manuscript was copied in Italy approximately around the 14th or 15th century and was censored in the 17th century. Abraham bar Hiyya’s main astronomical work known as Hokhmat ha-hizayon contains two parts; the first part Tsurat ha-arets or ‘Shape of the Earth’, which is included in Or 10721, and the second Heshbon Mahalekhot ha-kokhavim or 'Calculation of the courses of the stars’ which incorporates a whole section on intercalation. The whole work is probably the first exposition of the Ptolomaic system in Hebrew and was the first complete textbook of astronomy in that language. In Or 10538 Abraham further considered the problems of intercalation to enable Jews to observe the festivals on the correct dates (2).

Both volumes contain texts from Abraham bar Hiyya and both have kept their original 14th or 15th century bindings. Even though the binding styles are completely different, they are both unique objects. We decided to take a minimal intervention approach preserving as many of the historic features and characteristics of these manuscripts as possible, and to allow binding features and intricacies individual to these bindings to be visible. Repairs to these volumes would be carried out in-situ, intervening as minimally as possible whilst allowing it to be accessed safely by a guided readership.

Or 10721 - There was an increase in book production towards the end of the 15th century when paper became more readily available and also a greater demand for embellishment of finished books as they became more affordable to produce. This meant that binders had to create time-saving methods which led to the adoption of less durable techniques and materials. Despite this, when developing techniques for book conservation today, we can learn a great deal from medieval book structures as their continuing existence is testament to their strong mechanical techniques of production. 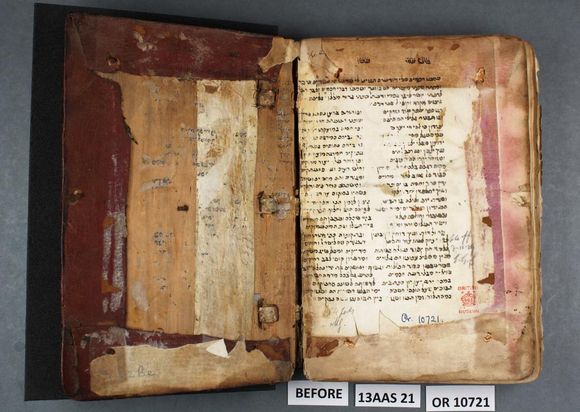 When Or 10721 came to conservation it had missing areas to the leather exposing one of the sewing supports, a cracked and abraded surface, and a missing endband. The other endband was present but breaking away from the binding. One sewing support had broken in the gutter at both joints with the boards, which was causing the first and last sections to protrude from the boards (cut flush to the textblock) at the fore-edge.

A number of folios were loose with subsequent tears and crumpling to the edges. Where the vellum pastedowns had come away from the boards a section had torn away and was still adhered to the inner board surface. Rust from the metal bosses had caused burn holes in the first and last few folios, and the volume had surface dirt throughout. 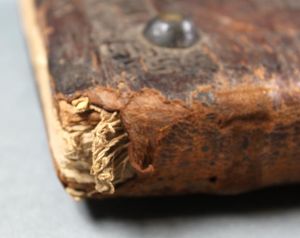 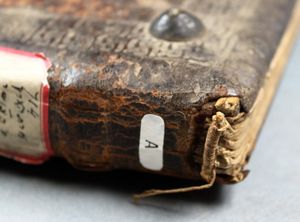 Damage to leather spine: Thread remnants from the tail and head endbands showing damage from use and original lacing into boards.

Some of the damage that has occurred over time has exposed otherwise hidden codicological features which are of interest to the scholarship of bindings of this type. Therefore one factor in the treatment of this item was not to hide this evidence.

The treatment aims for this book were:

The sewing supports were extended using linen thread which was frayed out and adhered to the wooden board. This repair in addition to repairing and reconnecting the endbands to their cores within the boards helped strengthen the opening of the boards and the connection of textblock to binding. It also helped to ease the sections back into the binding and prevent further damage to the paper where it protruded at the fore-edge.

Or 10721 spine after conservation.

Or 10538 is a manuscript written with iron gall ink on parchment with annotations and foliation in graphite. The binding is limp vellum with the double alum-tawed sewing supports laced into the cover and a foredge flap extending from the left cover. Writing is visible over the covering parchment. The binding has been sewn all along on two double alum-tawed supports with thick linen thread. These supports are crossed and laced into the cover in a triangle pattern. Remnants of alum-tawed ties were observed. There are no spine linings or adhesive on the spine which has a natural hollow. Paper labels are found on the spine and left cover.

We don’t know the exact date of the binding but we do know that limp vellum bindings were commonly used in Italy in the 15th century answering to the increased demands of the time. This is a non- adhesive structure, which relies on strong sewing and materials. On the textblock there are indications that it has been resewn: a central sewing hole is not used in the current sewing and there is evidence of a sewing support in the corresponding place on the spine. 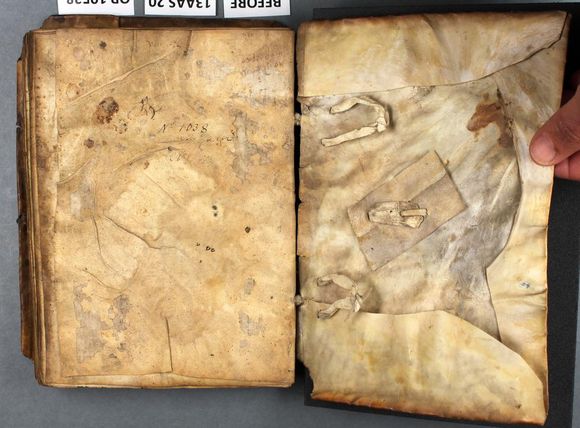 Inside of right board showing alum-tawed supports which have been knotted together. 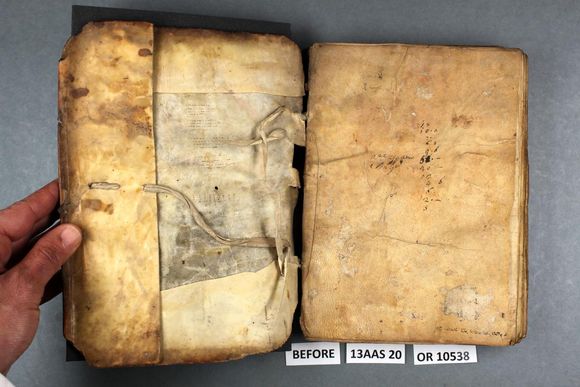 Inside of left board showing flap.

The covering parchment was severely damaged. Assessment showed that it was cockled, brittle, gelatinised, and stiff, with overall staining and abrasion. There was severe shrinkage and the foredge flap has been folded inside the left cover. The right cover no longer extends to the foredge of the textblock. Shrinkage resulted in tension which has contributed to loss of covering on the spine; 50% of the spine covering was missing. There were losses to the corners of the left cover and foredge flap joint. Paper labels on the spine were torn, lifting, and had losses. The sewing was in poor condition, with broken kettle stitches in the centre at head and tail.

Damage at the spine.

Spine after releasing the supports from the left cover.

The treatment aims for this book were:

The challenge was to repair the cover without disturbing the lacing paths and undoing the knots. The alum-tawed ties were carefully removed from the right board, leaving the knotted alum-tawed ties of the left board untouched. The spine was then carefully repaired using layers of Japanese papers dyed to match the original colour. 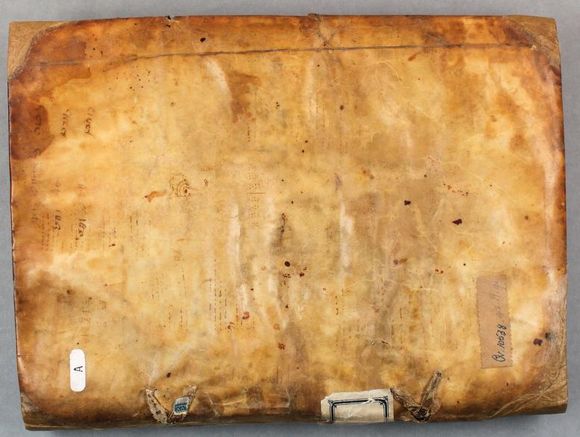 Right board after treatment.

Our approach is always trying not to disturb the codicological features as we can not necessarily anticipate what future research may be looking for. It is always the challenge of book conservators to make items accessible to readers while preserving as much as possible. In this case it has been very satisfying to be able to preserve the individual features of these unique items and make them available to researchers. Of course the books still need careful handling, as they are not only the carriers of content but also of the history of the objects and the history of materials and techniques of the time.