Joel Munsell (14 April 1808 - 15 January 1880) was a United States printer, publisher and author who had the vision to record useful and contemporary information in the field of papermaking during the 19th century in his 1956 publication Chronology of  the Origin and Progress of Paper and Papermaking. Towards the end of his career in 1875, Munsell penned and privately printed some wonderful recollections of his childhood in Northfield, Massachussets, where he was born and educated (1). Following an introduction to the wheelwright's trade by his father, the young Joel Munsell apprenticed for the printer's trade in the office of the Franklin Post and Christian Freeman newspaper in Greenfield, MA, about 12 miles south of Northfield, where he eventually became office foreman. In 1826, an eighteen year old Munsell relocated to Troy in New York before making his way to Albany in 1827, where he would remain until his death. Munsell initally gained employment as an office clerk in the book-store of book dealer John Denio (2), and quickly rose up the ranks to become manager - a position he resigned from in order to secure a position as a journeyman printer. While at Denio's Munsell edited and published a semi-weekly paper called the Albany Minerva which he established in 1828.

It wasn't long before Munsell left the bookstore and took up a position as a compositor in a local newspaper where he stayed for six years. By 1836 the young printer had acquired enough money and knowledge to enable the establishment of his own printing business. He purchased a job printing office in Albany where he was publisher and editor of the New York State Mechanic (a Whig campaign paper) from 1841-1843. His publications in 1842 included The Lady's Magazine, The Northern Star and The Freeman's Advocate, followed by The Spectator in 1844, the Guard and Odd Fellows' Journal in 1845, and subsequently the Unionist, the Albany State Register, the Typographical Miscellany, the New York Teacher, the Albany Morning Express and the Albany Daily Statesman. Munsell was also responsible for publishing Webster's Almanac and the New England Historical and Geneological Register from 1861-1864. 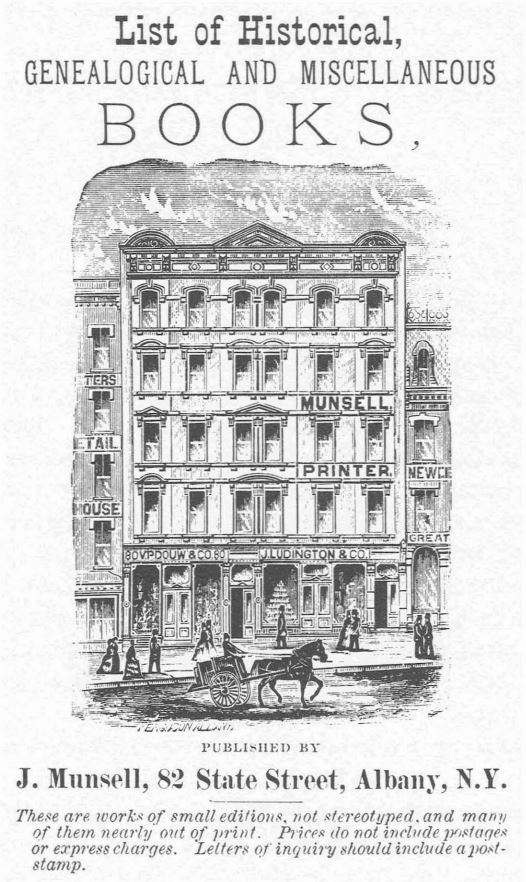 His dedication to typography and hard work led his business to become one of the most suscessful in Albany. His first book, Outline of the History of Printing, was written in 1839, although he is best-known for Chronology of Paper published in 1856, with extended various editions in 1857, 1864, 1870 and 1876.

In 1834, Joel Munsell married Jane C. Bigelow, a marriage which was to last twenty years until her death. They had four children together. Munsell later remarried and wed Mary Anne Reid with whom he had another six children. At the age of seventy-two, Joel Munsell died in Albany, New York, on 15 January 1880. His son, Frank Munsell, succeeded him in the printing and publishing business.

A large Munsell Collection is held at the New York State Library which acquired his extensive collection of notes and books on printing and local history. These notes were later edited and annotated forming an "Historical Series", contributing greatly to the historical literature of this area. Syracuse University's Bird Library holds a number of Munsell editions, and there are also significant Munsell collections at the Albany Institute of History and Art and the American Antiquarian Society of Worcester, MA, both of which Munsell had an active membership with and to whom he sent copies of most of the material he printed throughout his life.

Joel Munsell had a long and distinguished career and to this day is held in high regard in the world of printing and publishing. See references below for more information on his life.