Photographed by the Hand of a Sinner

Senior Imaging Technician Kristin A. Phelps takes us behind the scenes of the British Library’s Imaging Services where there are several ongoing digital projects at any given time.

Click here for an Arabic translation of this article, as translated by the Thesaurus Islamicus Foundation and Dar Al Kutub Manuscript Project. 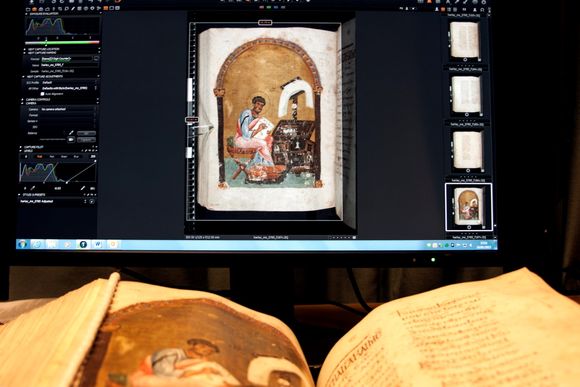 Prior to the 14th Century, Byzantine artists who painted icons preferred to shun hubris and leave their works unsigned. Their work would be placed in churches to be seen and revered by thousands of the faithful over the centuries. Occasionally, an artist would sign their work with the phrase “Painted by the hand of a sinner.” This allowed the sacred value of the icon to remain unfettered by human presence.

Fast-forward to the modern world and a secular context: millions of digital images are accessed every day on websites of museums, libraries, archives and other collections. These images are taken by unseen photographers and are unsigned. The anonymity of the process allows for ‘pure’ and non-distracted understanding of the object by a viewer. But, who are these modern day artists who make invaluable works of art, faith and history accessible to all of us? How does their particular art form impact what we are able to view on our computer screens, tablets and smart phones?

To answer these questions we are going behind the scenes of the British Library’s Imaging Services where there are several ongoing digital projects at any given time. One project in particular, the Greek Manuscript Digitisation Project (GMDP), is working to digitise centuries old Greek manuscripts, some of which include illuminated portraits of the Evangelists executed by anonymous hands. The British Library’s third phase of the GMDP began in April 2014 and is scheduled to be completed March 2015 with a target of digitizing over 300 manuscripts, which is roughly equivalent to 120,000 images. The project has been funded by the Stavros Niarchos Foundation, the A.G. Leventis Foundation, Sam Goff, the Sylvia Iannou Foundation, the Thriplow Charitable Trust and the Friends of the British Library, among others. 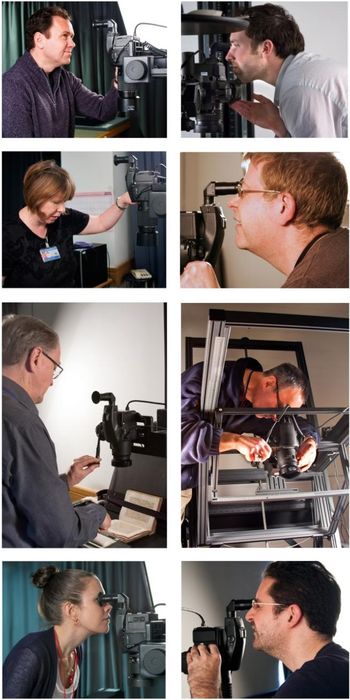 The British Library’s Imaging Services currently employs eight full time photographers, or Senior Imaging Technicians, who represent approximately 110 years combined of photographic experience at the Library. While two of these photographers have been tasked with working on the GMDP, all of the photographers will work on the project at one point or another.

The eight photographers come from a variety of backgrounds including more traditional photographic backgrounds as well as artists, a former school teacher, a former 3D graphic designer with a specialty in computer gaming and a former archaeologist.

Once a book is delivered to the Imaging Studio, the physical digitisation process can begin. Every manuscript is unique and its physical condition can vary widely. For this reason, a conservation assessment is being performed for each manuscript to be imaged for any of the digitisation projects. This written report guides the photographer responsible for the book to ensure that manuscript is returned in the same condition it was received.

Once the images are captured, they are reviewed and edited in Capture One (minor adjustments only including cropping, straightening and exposure adjustments).

Finally, the RAW files are processed into both Tiff and Jpeg files before being passed back to the various digital project teams for online publication.

Does this process sound simple and straightforward? It rarely is. Often times, a manuscript needs to be carefully propped up to become level, or has a page which is not flat. The photographer is then responsible for manipulating the manuscript with a very gentle and cautious manner to make the resulting image provide the best view of a page. In addition, items may be housed in glass which cannot be removed for imaging. 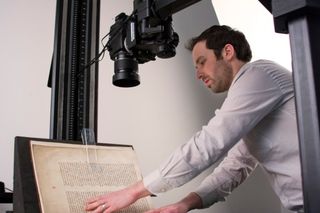 Or, objects may be large and unwieldy or extremely small. Lighting conditions may need to be changed if the manuscript contains significant amounts of gold leaf decoration. And, of course, there are always physical adjustments of the camera position and settings as well as employing a variety of lenses. Throughout the process the photographers have to use their judgment and experience in order to “do no harm” and yield images that represent faithfully the original material. After observing everything which must be considered to photograph a manuscript, the question arises: are these professionals artists or technicians? The Library photographers themselves are split when it comes to answering this question. Half of them consider their particular type of photography an art form whilst the rest view it as form of scientific imaging.

No matter what the answer to this question is, one thing is certain. These photographers deliver an impactful and important volume of work to the digital masses. Scholars from across the world have advanced their research without the need to physically visit the British Library. Thousands of people are able to connect with global cultural and religious heritage with a click of a button.

Of course, the GMDP project is just one example of a common wider trend of museums, libraries and archives digitising their holdings for online publication. In Europe alone as of 2014, 87% of cultural heritage institutions had digital collections. ENUMERATE’s 2014 survey found that the most important perceived reason for digital collections was academic research, which points to the growing field of Digital Humanities. With all the new material available online, a visual revolution of the democratisation of knowledge is happening. Now a scholar is no longer hindered by the inability to travel afar to libraries and museums to see objects; instant access to manuscripts and 3D objects is only a click away. Scholarship is becoming more diverse because open access to online collections allows those who wish to see something to be able to do just that. In fact, in its still young life, the third phase of the GMDP has already been the focus of scholarly research as well as being used and shared by a number of New Testament and Patristic blogs. 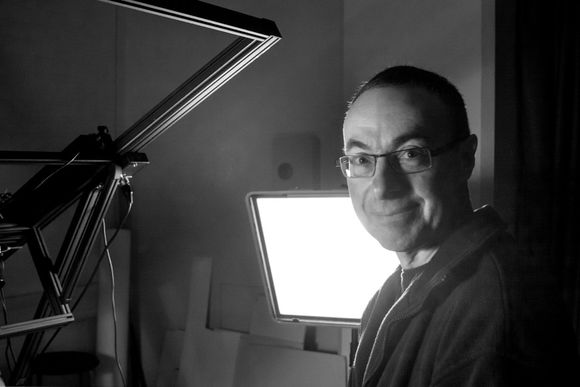 Posted by Christina Duffy at 11:54 AM

Just to say thank you....always in awe of the ability to quite literally 'flip through' manuscripts, zoom in on details, see things that even the human eye unaided would probably not see, things that would probably be impossible with the original in hand. Again awesome. All that thanks to what you do. AndTHANK YOU

Whatever they decide to call themselves, that team do an excellent job. The images are fantastic - I'm quite happy to see the detail from those rather than risk deterioration of the originals.

Thanks for a great job.