The Marriage of East and West: Conservation of a Photographic Album from Burma

One often wonders what treasures can be hidden in a buckram box, and this time was no exception. The box on opening revealed an album covered with brightly coloured textile and leather. The pattern on the boards looked unusual and the use of the silk textile to cover a photographic album did not seem common either. This album housed a collection of 19th century photographs from Burma taken by Felice (or Felix) Beato. 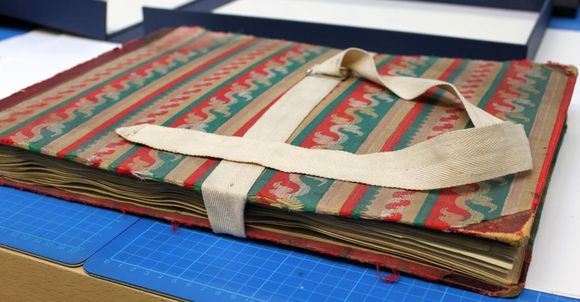 The album before conservation.

At first sight, a cotton band strapped across the boards spelt poor condition and acted as the ‘do not touch’ warning. On closer inspection, my first impressions were confirmed. The leather on the spine was fragmented; sewing exposed and broken, while the boards were only kept in place by the strapping. Most photographs in the album had some distortions caused by water damage and by heavy glue application to corners; with some tears present where the pull of the adhesive was too strong. A large panorama of Mandalay was the most damaged photograph in the album. However, on the whole, the album as a housing medium protected the contents well and the damage inside was less extreme. 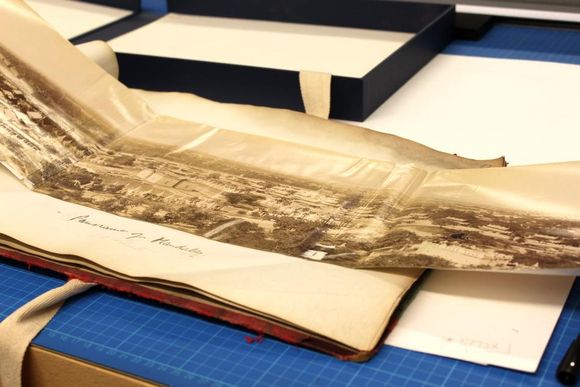 Panorama of Mandalay before conservation. 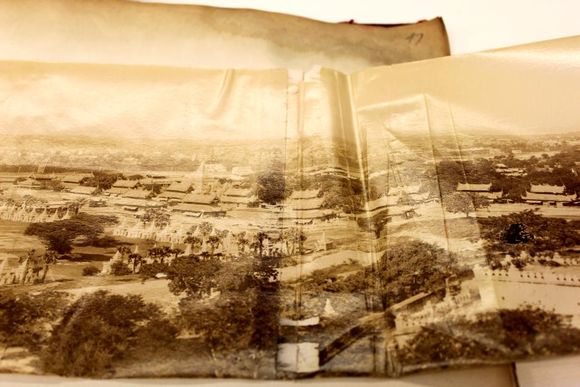 A detail of the panorama showing multiple folds and damage to the gelatine layer of the photograph.

The albumen prints taken by Felice Beato showed excellent quality images of a bygone age. One could not help but be engaged by the faces, buildings and landscapes, and wanting to find out more about the author and the object itself.

A quick search into Felice Beato’s background revealed a dynamic personality moving around the world with ease and covering such historic events as the fall of Sevastopol, the Indian Rebellion of 1857 and the Second Opium War. Beato was one of the first war photographers who reputably produced the first images of corpses. His extensive travels took him all over East Asia, including Japan, and he was also the official photographer of the British forces sent to relieve General Gordon in Khartoum, Sudan. However, Burma was the country he knew best. He lived there towards the end of his life setting up a successful photographic studio and business.

The album broadly dated 1880-1890s was the product of his later years. The silk covering of the album is similar to the clothing worn by the Burmese royalty shown in one of the pictures from the album. 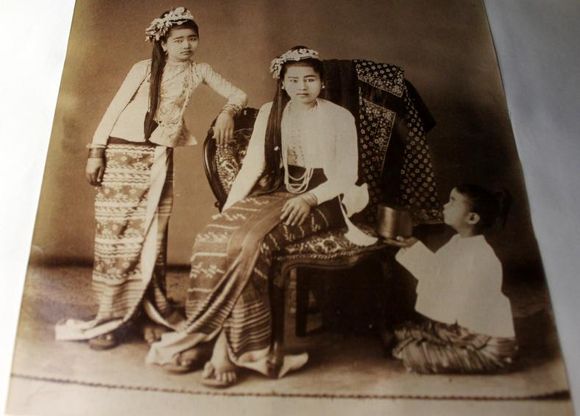 The Burmese textile depicting a series of wave patterns in green, yellow and white threads is known as Luntaya Acheiq pattern or the flowing water of the Irrawadi River. The textile is traditionally woven on looms using an interlocking tapestry weave and 100-200 small shuttles¹. 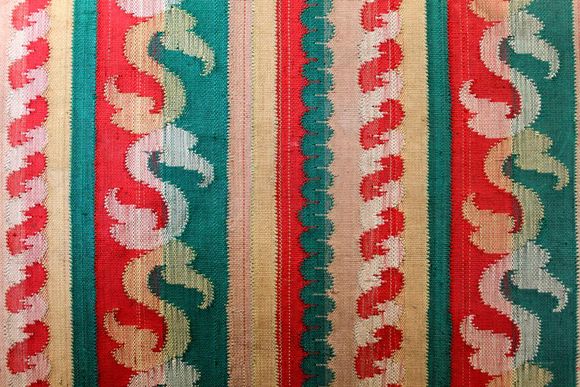 The detail showing the pattern on the textile cover.

Beato’s other claim to fame is his mastery of the photographic medium. Like other early pioneers in photography before and after him, Beato experimented with the new technology and stretched the medium more suited to studio work rather than photojournalism to its limits. Silver albumen prints produced from wet collodion glass plate negatives, were not easy to process and the glass negatives must have been heavy to carry in the precarious war circumstances he was often working in. He is also credited with pioneering the hand colouring of photographs and the making of panoramas. One such excellent example of the latter is the panorama of Mandalay. Due to the damage sustained while in the album, a decision was taken not to fold the panorama back into the album. After conservation, it was placed in a Melinex sleeve and housed in a custom made folder.

The panorama of Mandalay after conservation. 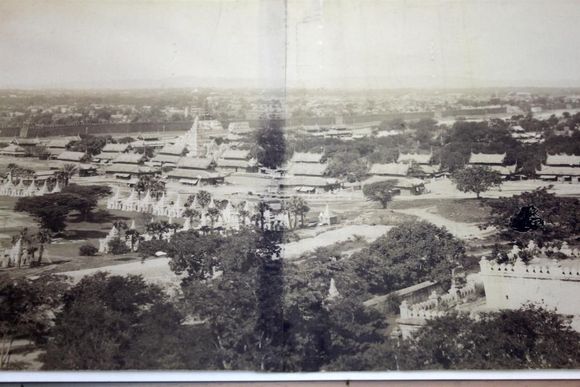 Flattened and repaired fragment of the panorama.

The album itself must have been produced for one of the wealthy ex-pats or influential locals. The paper used for the text block was imported from the US. It bears the watermarks of L.L. Brown Paper Co. mill from Adams in Massachusetts. The top quality of the Advanced Linen Ledger paper chosen for the text block ensured that the photographs survived to this day in reasonably good condition.

It is not surprising that Beato’s business was successful. In this beautiful album, Beato combined together the attractive Eastern textile covers and Burmese content, with Western binding and handmade paper; producing a high quality object proving irresistible even when in poor condition! Beato’s photographs shaped the Western notions of several East Asian societies for many years and now after the conservation they will continue to be a rich source for further research. 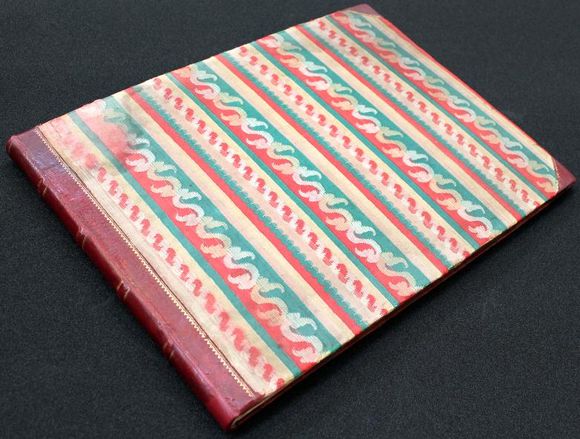 The album after conservation.

Posted by Christina Duffy at 10:26 AM