Farewell to all that

Preparing for retirement, I inevitably revisited the exciting projects and beautiful objects I worked on during my time at the British Library. The conservator’s role has seen many changes, even in a decade. Limited resources are increasingly focused on preserving whole collections by reducing the risks of damage and deterioration, rather than treating single items. But to make those collections more available both in the Reading Rooms and digitally to users across the world, some repairs are essential so items can be handled safely. Minimal intervention helps to retain evidence of the item’s history and past use. 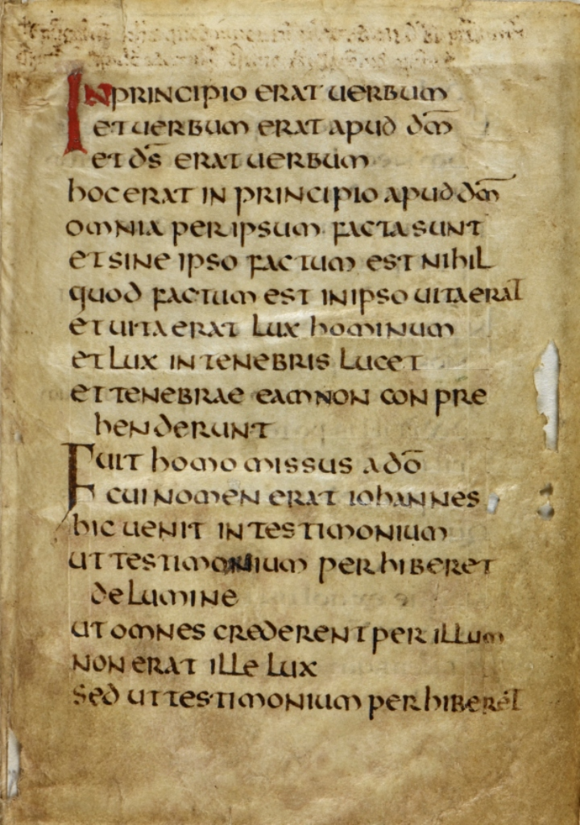 The St Cuthbert Gospel (Add Ms 89000) f.1r The damage records the ways the book was used and stored through the centuries and will be preserved.

My first project was the conservation of Alexander Fleming’s papers (Add Ms 56106-56225), including those relating to his discovery of penicillin – not perhaps the most suitable job as I am highly allergic to it. The repaired notebooks were housed in plastazote, laboriously cut to shape by hand. Eventually, I would learn to “drive” a Zünd cutter, which did the same job in minutes.

Beryl Bainbridge’s papers followed, and it was a surprise to discover that she had been to art school as a teenager and illustrated her early work. However, she used a poster paint with very little binder, so the surface was often powdery. The paintings were treated with a weak solution of JunFunori, misted on with a nebuliser repeatedly over a week or more. 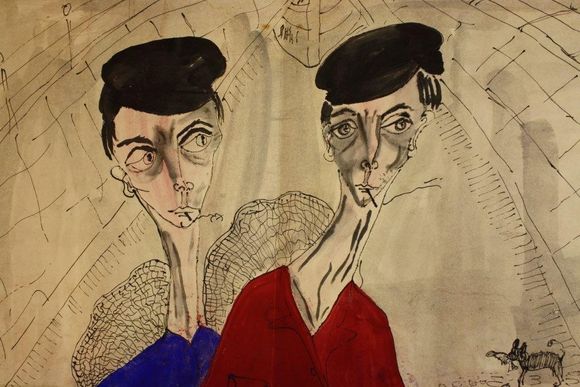 Immediately after World War II writing paper was scarce, so Bainbridge often used poor quality scraps held together with pressure sensitive tape. This was all degrading and had to be removed with heat and solvents – very carefully, where there was text nearby. Modern inks can run in both water and solvents, making conservation more difficult. 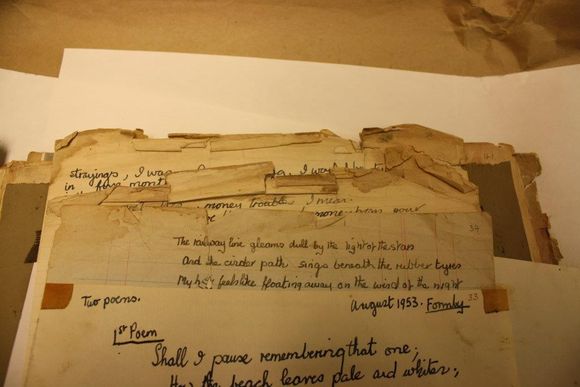 Edgar Mansfield’s working archive for his designer bindings gave me much delight, and more challenges. First seen packed tight in two box files, after conservation and proper housing they filled a shelf and a half. Early on we agreed to preserve evidence of how the design process developed, and how the final tooling patterns used folds and excisions to fix the paper to the book leather temporarily. Loose overlays needed careful hinging to secure them in precisely the right position. The British Library has two of Mansfield’s finished bindings. 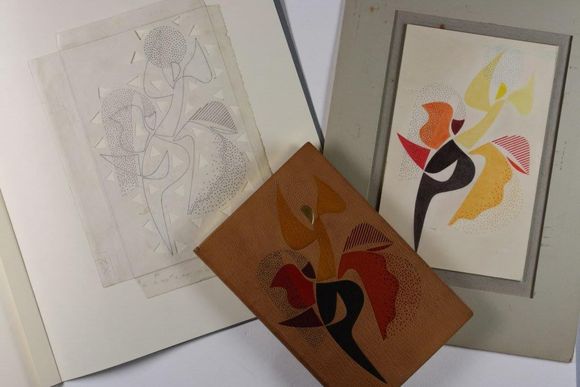 Valery’s Dance and the Soul bound by Mansfield (C130c6) with his final design and the tooling pattern used to transfer it to the leather cover.

Eventually I moved into digitisation projects (Harley Scientific Manuscripts, Greek manuscripts and finally Hebraic manuscripts). As I gained experience, I also got the more difficult one-off jobs. The largest item, the Moutier-Grandval Bible (Add Ms 10546), more than half a metre high, needed a special cradle and team of people to handle it safely (read more here). 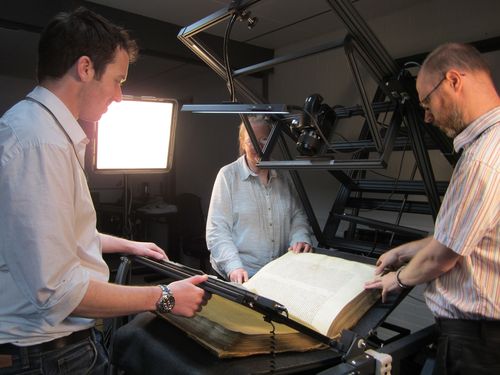 Two people turn the leaves while a third adjusts the cradle.

For the Brontë miniature books I had to make tiny “fingers” to hold the leaves flat for imaging (more on that here. 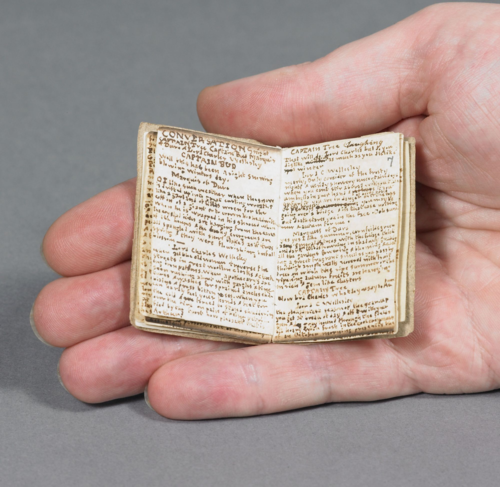 Through the years, a stream of running repairs have come my way; simple tasks for the most part, but letting me handle many beautiful items: the Theodore Psalter (Add Ms 19352), Cruciform Lectionary (Add Ms 39603), Chinese Qur’an (Or Ms 15256/1), Queen Mary Psalter (Royal Ms 2.B.VII), Macclesfield Alphabet Book (Add Ms 88887), Prayer Roll of Henry VIII (Add Ms 88929), Guthlac Roll (Harley Roll Y 6), charts of Cook’s voyages (Add Ms 31360), a suffragette prison diary (Add Ms 49976) and many hundred more, most recently the Leonardo Notebook (Arundel Ms 263). To increase efficiency, a mobile workstation took me out of the studio to work in the storage areas, eliminating the transportation of books to the Conservation Centre and the associated security and paperwork. 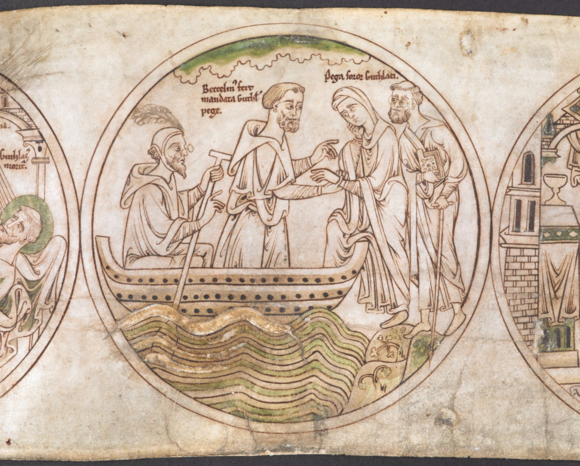 Life of St Guthlac (Harley Roll Y 6) f.15r The spectacles and feather were added by an earlier owner.

I also did exhibition work, mostly condition reporting and checking loan items. But one job in Durham had the local newspaper asking “How many people does it take to turn a page and how long does it take them to do it?” Since the book was the Lindisfarne Gospels, it did take a while.

Visitors sometimes asked about my favourite collection item and most often I chose whatever I was currently working on and making discoveries about. But the book that lingers in my memory is Thomas Osborne’s Treatise on Arithmetic (Harley Ms 4924). If I had had such an attractive textbook as a child, I would have been a more eager student. It is now too frail to be issued in the Reading Room, but is available to everyone in digital form. 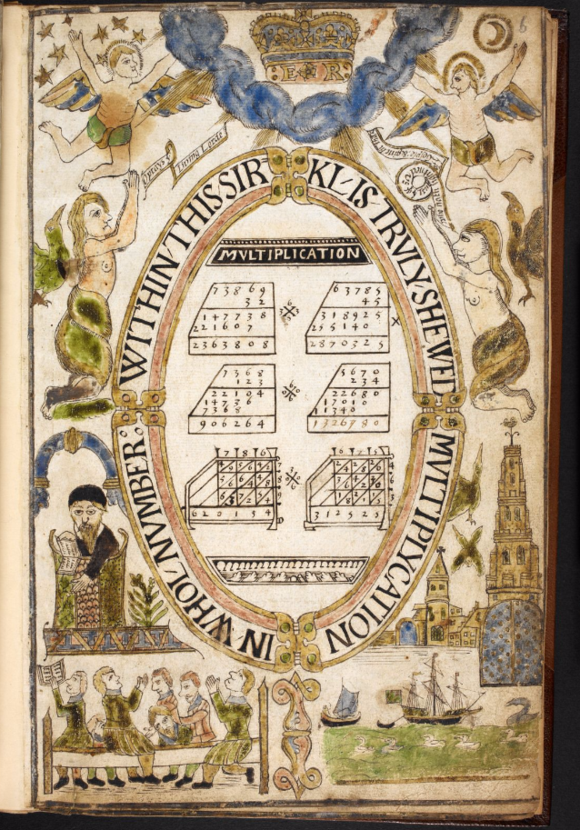 I plan to revisit the British Library eventually to research historic binding structures, but meanwhile I shall be following the blogs and keeping an eye on the latest uploads to Digitised Manuscripts.

Posted by Christina Duffy at 2:08 PM