Conservator Flavio Marzo reports on his fascinating findings during the conservation of one of the books bearing the presumed signature of William Shakespeare.

As it is now the 400th anniversary of the death of William Shakespeare and the British Library has unveiled a major exhibition about the Bard of Avon, I thought it was a good time to share the conservation work I carried out on one of the items currently on exhibition. In 2005 I was given the opportunity to work on an item here at the British Library bearing one of the few surviving (possible) signatures of the poet. The book, possibly part of Shakespeare’s personal library, is a copy of “The Essayes of Morall, Politike and Militaire Discourses” written by Michaell Montaigne and published in London in 1603. The volume was sent to the conservation studio to be treated before being sent out on a loan and presented some very interesting and unusual features.

The cover and the book block were detached and the main task was to secure them together ensuring that any treatment was clearly visible and unobtrusive.

The sewing of the body of the book, most likely the result of a quite recent restoration campaign, was made on five narrow strips of tanned brown leather. Probably at the same time new end leaves were added and secured to the first and last sections through an over-casted stitching. There was no evidence of spine lining or glue applied to the spine. When the cover was removed the original sewing supports remained laced through the boards and the page with Shakespeare’s presumed signature was attached on the inside of the left board. 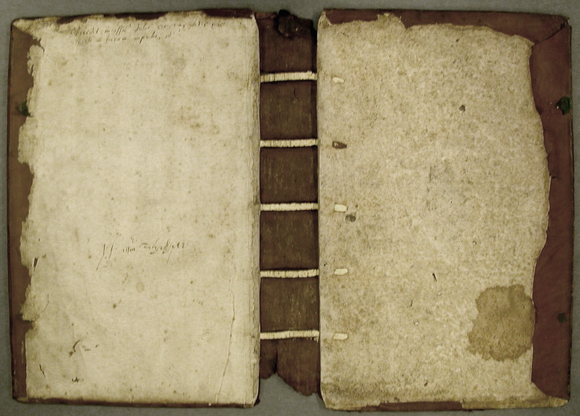 The inside of the detached cover with the signature page and the original supports laced with the cover.

The original sewing supports were made of strips of alum tawed leather with a second layer of tanned brown leather added to give thickness to the raised bands ensuring their visibility on the spine of the book.

Areas of the leather cover were missing at the head and tail. After a thorough examination of the cover I realised that the page bearing the signature, adhered onto the inside of the left board, was not originally attached as a paste down, and in fact was never originally placed at the beginning of the book. Careful visual examination revealed that a raised oval was showing through the page. 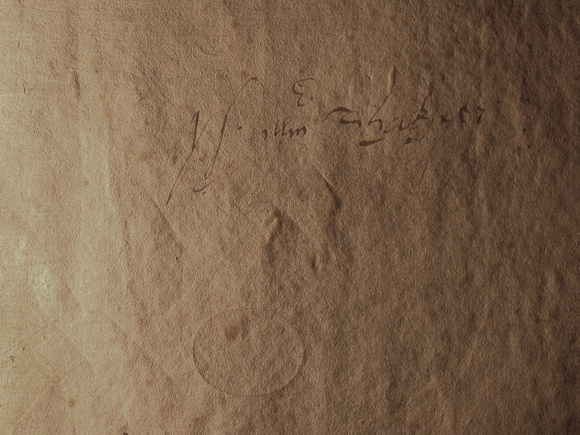 An image of the page taken with raking light clearly showing an oval shaped imprint from the recto of the page. 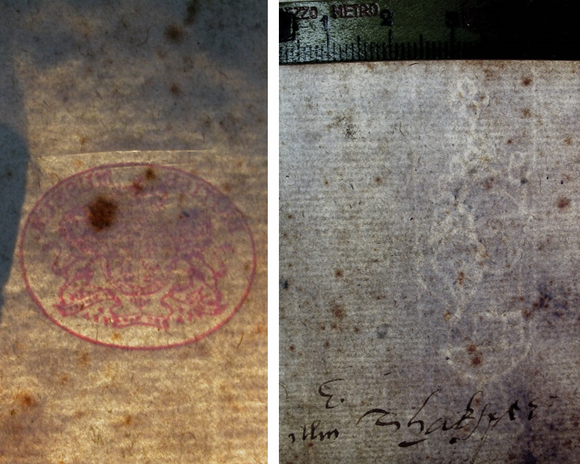 Left: British Museum stamp imaged with transmitted light. Right: Watermark of the page with the signature.

This watermark was subsequently compared with others found on the pages within the book block. Although no perfect match was found between the watermarks, there was a very strong similarity between them.

Other watermarks found within the book block. 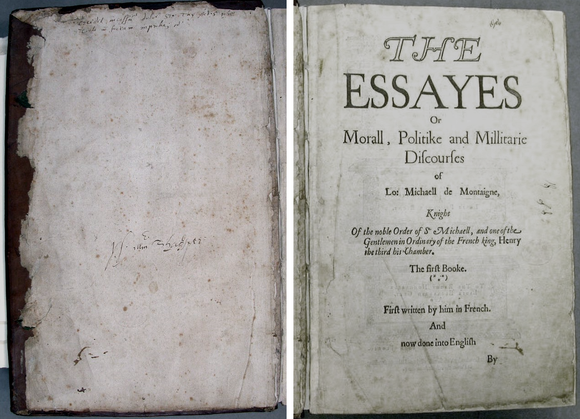 Mapping of the stains and damages show how different and inconsistent they are along the edges of the two sheets.

Remarkably, these damaged areas matched almost perfectly to the last restored original end leaf of the book-block proving that this sheet was originally placed at the back of the book and not at the beginning. 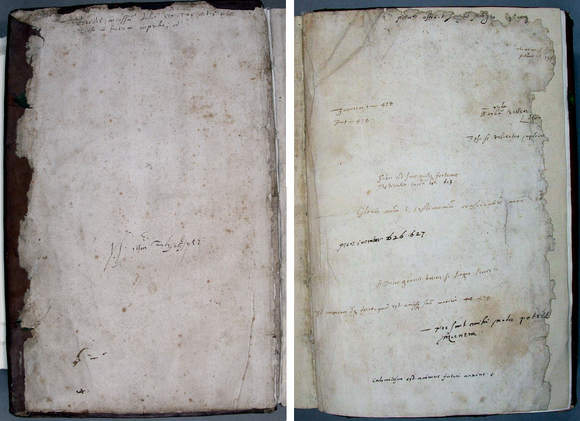 Matching damaged areas between the signature sheet and the last right end leaf.

The conservation of the volume involved the removal of the leather strip supports. These supports were failing and becoming brittle due to the acidic nature of the tanned leather. The strips were mechanically removed from the sewing thread passages and replaced with new linen tapes so that the book did not have to be re-sewn. 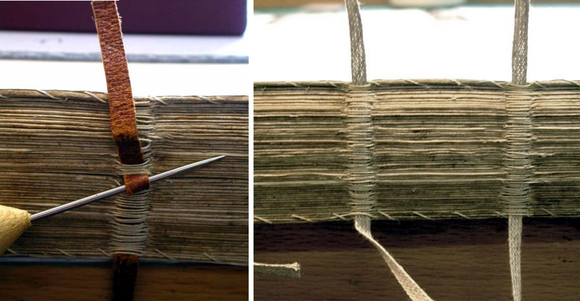 Removal of the leather strips (left) and their replacement with new linen tapes (right).

The leather of the cover was reinforced and in-filled with dyed Japanese paper and wheat starch paste.

Japanese paper and wheat starch paste are used because of their strength and reversibility. 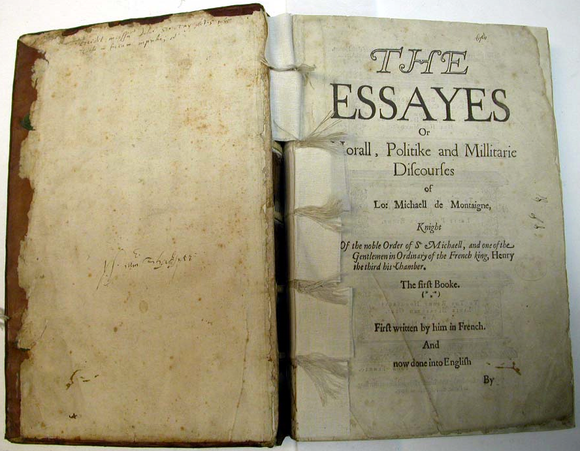 The strips of cotton fabric are adhered between the leather cover and the boards to secure the book-block with the cover.

It is hard to say why this page was tampered with. Possibly it was thought that by attaching this page to the front board it would become more difficult to steal. Sometimes conservation needs some forensic skills, but it always requires great attention to detail. Physical features when correctly interpreted can tell us a lot about the history of an item. It is extremely important when repairing items of historical value that conservators are careful not to inadvertently hide or remove features which may later prove to be significant.

This work, carried out a long time ago, is today still one of my most cherished projects. I am very pleased to be able to share it with you, especially during this year so significant in the history of the Great William Shakespeare.

See this intriguing collection item for yourself at our exhibition: Shakespeare in Ten Acts open until Tuesday 6 September.

Posted by Christina Duffy at 3:17 PM