The conservation process is always a very special time for the item under repair. It is a time during which normally concealed elements of the object are exposed offering a unique opportunity to understand the processes involved in the making of the item. This is even more apparent when conserving books. Books are complex three dimensional objects and for this reason the conservator’s decision-making process can be extremely challenging.

The following examples show how important it is to record every step in the conservation process and to be able to discuss findings made along the way with other experts. This enables us to fully understand and consequently be able to retain and share the information uncovered during all stages of the work. For the past three years I have been working as Manager of the Conservation Studio for the British Library Qatar Foundation Partnership. I have worked with a rich and heterogeneous variety of library material ranging from archival files to ancient scientific Arabic Manuscripts. This material has been arriving on our benches for digitisation preparation and for more extensive conservation.

A group of sixteen manuscripts was identified as being relevant for the Qatar Digital Library Portal during scoping for the second phase of the project. This portal is where our project team upload digitised material. The sixteen manuscripts are a small fraction of the so called Delhi Collection; a vast collection of more than 2,900 manuscripts held here at the British Library. The manuscripts are written in various languages and historically thought to have come from the Royal Mughal Library in Delhi.

The manuscripts are in very poor condition and housed in conservation boxes. The books were transported from Delhi to Calcutta and faced many perils on their journey to the India Office Library in London. They were eventually transferred to their current home here at the British Library, but have never been conserved. This is quite a unique situation since in the past few centuries vast campaigns of restoration and re-binding have irremediably transformed much of our library collections. During these campaigns original bindings were often removed. This resulted in a loss of historical evidence relating to the use and provenance of the volumes.

The subject of this piece is the recent conservation work carried out on two of these manuscripts to enable their imminent digitisation. 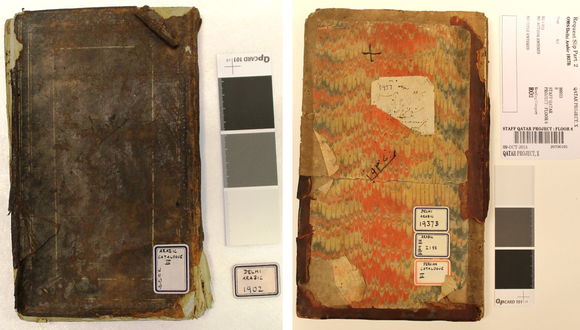 These manuscripts contain collections of mathematical treatises dating possibly to the XIX and have been heavily damaged by insects and centuries of use and abuse. The treatments conservators apply to items of historical value should always follow a series of ethical guidelines that standardise our profession. Those guidelines are based on one main principle called ‘minimal approach’. ‘Minimal’ doesn't mean less time doing the work or small in the sense of the amount of money spent for the treatment; ‘minimal’ refers to minimal intervention.

The conservator must work with great attention to detail ensuring that historically relevant physical features in the binding, sewing and substrate remain intact and undisrupted. Our work in the British Library Qatar Foundation Partnership Conservation studio is primarily preparation for digitisation. This means we focus on making items fit for withstanding the imaging process. This is both to ensure safe handling of the object and to enable the creation of a good quality surrogate.

Books are very challenging items to reproduce digitally and are often tightly bound. Each page needs to be carefully photographed and the text needs to be entirely visible and legible. The aim of a good quality online surrogate is to give users a truthful virtual experience of the item in its entirety, that is, in the case of bound volumes, much more than the mere text written on its pages.

Delhi Arabic 1902 and 1937B required conservation work because they were too fragile to be safely handled. It would have been impossible to achieve full legibility due to the poor state of their pages. Pages laced with insect holes were repaired with very thin toned Japanese tissue paper and the weak sewing of the book block was reinforced. Every piece of the book structure such as the remnants of the threads used to create the end bands or the sewing of the book-block were supported and secured where they were originally. 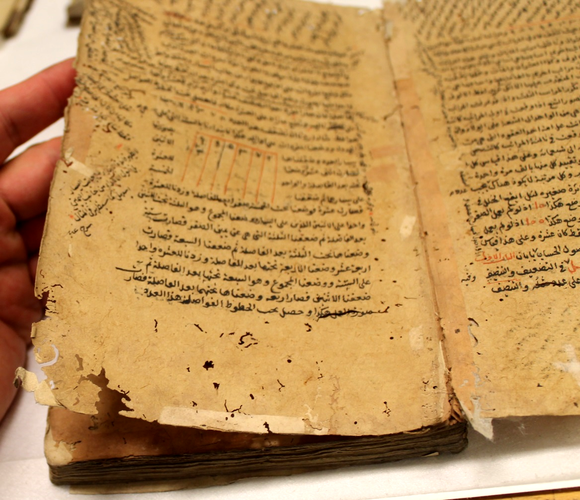 Damage due to insect infestation of Ms Delhi Arabic 1902.

Reinforced areas along the edges of the pages.

The leather covers proved to be a completely different challenge on their own. As soon as they were closely examined it became clear that the boards for both the books were created with layers of reused manuscript fragments. 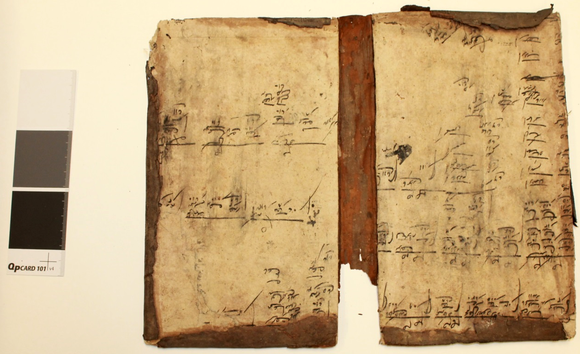 Inside the detached cover of Ms Delhi Arabic 1902 with evidence of the reused manuscript fragments.

The layers constituting the boards in manuscript Delhi Arabic 1902 were already delaminating and the adhesive used to stick them together was failing. During discussions with the curators it was decided to completely separate the layers forming the boards and to not re-use the leather cover any more due to its fragility.

Each layer of the newly found manuscript was easily lifted with the help of a spatula before re-housing in Melinex folders. Numbering was applied to each envelope recording the sequence of the original layering, and subsequently all envelopes were housed in two separate four flap folders to identify the left from the right board. The writing style and content of these manuscript fragments is currently under study and has not yet been identified. It will add interesting information about Delhi Arabic 1902 and help to date the cover and possibly to identify the geographical area where it was made. 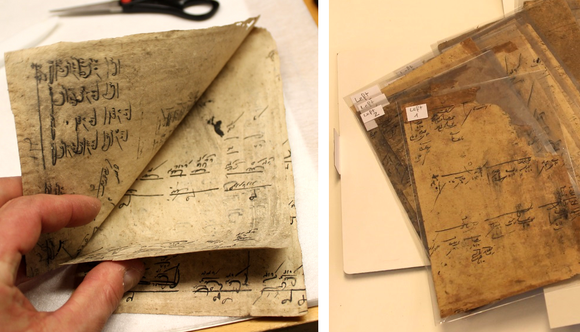 Layers of manuscript fragments are easily lifted and housed in Melinex numbered envelopes.

New conservation boards were prepared and inserted into the now “empty” leather cover. A piece of Plastazote was cut to size and used as a substitute for the now removed book-block in order to hold the leather. The leather cover was wrapped in Melinex to protect it during future handling. 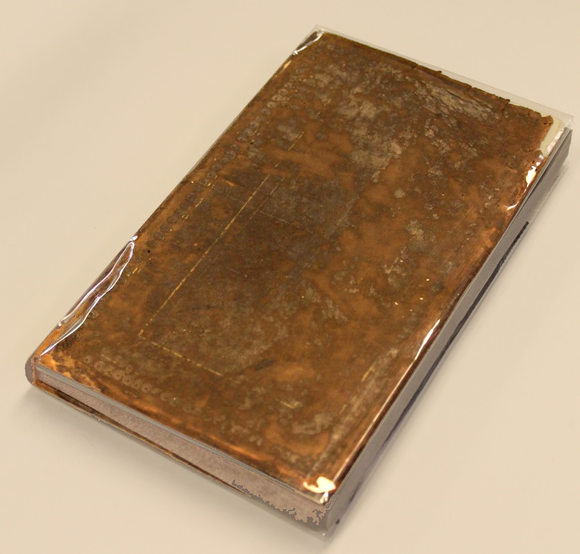 The leather cover with the transparent Melinex wrap and the Plastazote support.

A new light board limp cover was created for the book-block after all the pages had been repaired and the sewing reinforced. 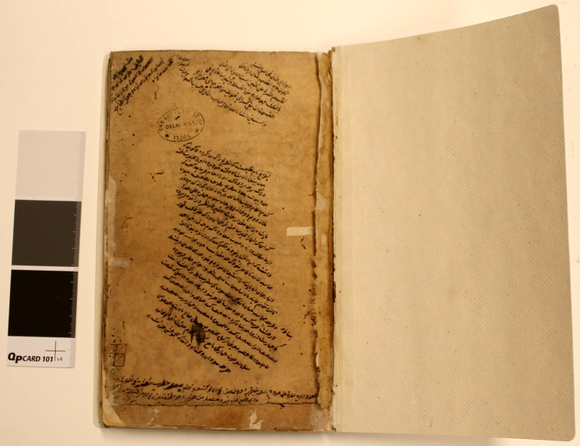 The now separated parts of the manuscript were housed together in a drop back spine box made to size. 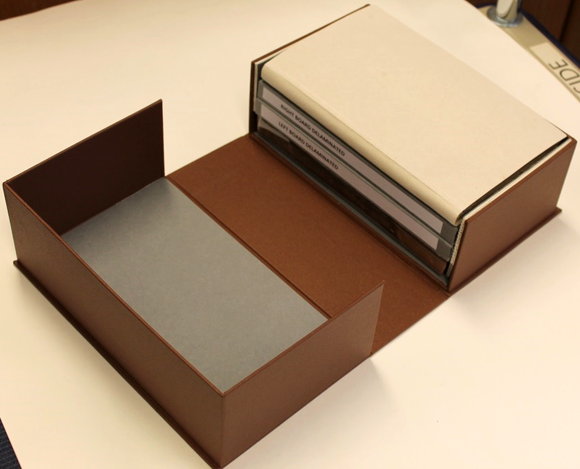 All the separated parts of the manuscripts are housed together in the box.

The cover of the second manuscript, Delhi Arabic 1937B, also showed evidence of fragments (from possibly the same manuscript) used to make its boards, but in this case a different method was devised for the overall conservation of the book. 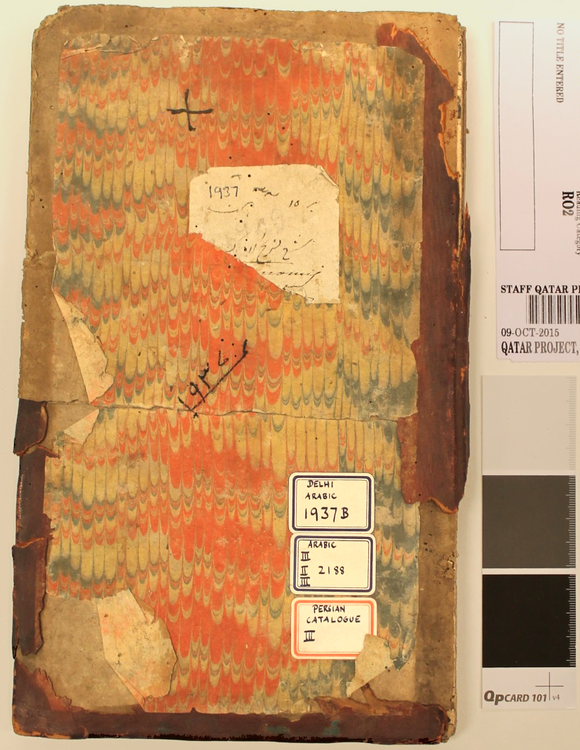 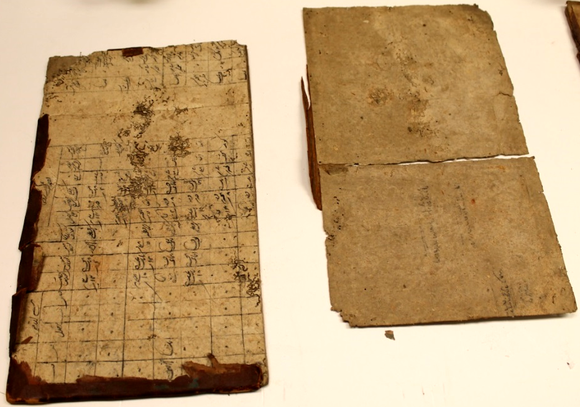 Fragment of reused manuscript used to reinforce the board of MS Delhi Arabic 1937B.

In this case only one layer, on both of the boards, transpired to be made of reused written paper. For this reason it was decided that the boards and the cover, also detached and delaminating, would not have to be dismantled. Instead they would be imaged and later re-composed to be re-attached, as originally was, with the book-block. 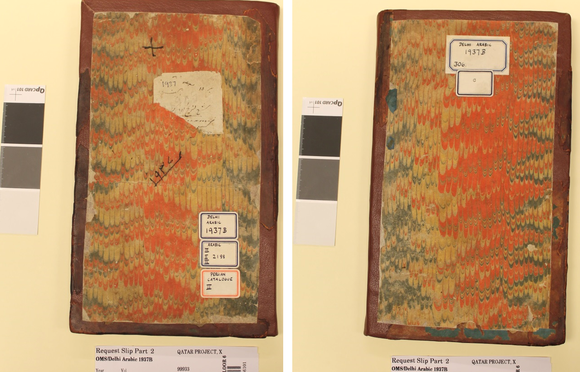 Right (front) and left (back) boards of the fully restored binding.

The losses of leather on the spine and on the edges of the boards were filled with new goat archival leather and all the fragments of the old leather and the decorated paper were re-adhered where they were originally. Interesting features were in this way preserved for posterity, for example the covering leather that was applied to the spine, along the edges, and on the corners of the boards in thinly pared pieces retained its overlapping appearance. 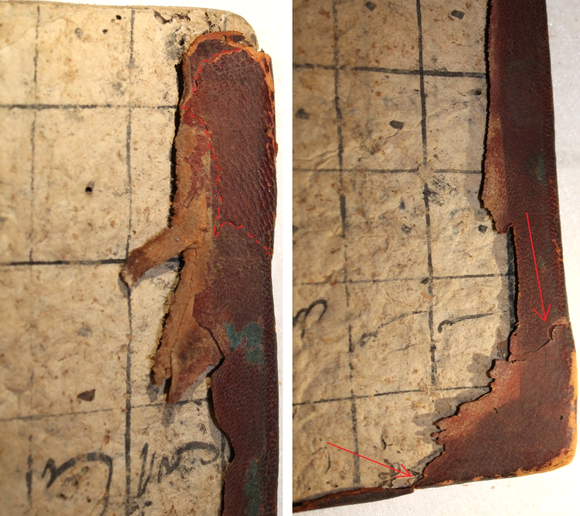 Details from the spine and one of the corners clearly showing different pieces of leather overlapping.

Small remnants of strips of blue decorative paper were consolidated and adhered along the perimeters of the decorative marbled paper. 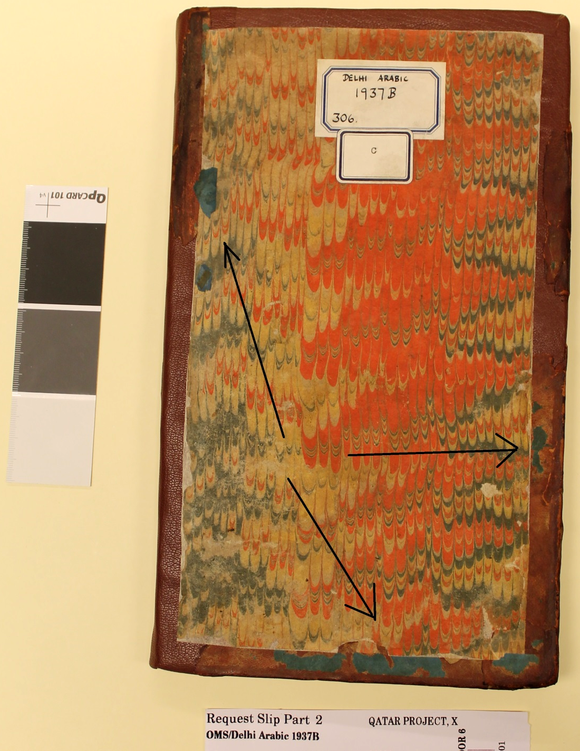 Our meticulous method of working enables us to provide scholars who are interested in all aspects of the volume, not just the content, with as much information as possible. This attention to detail potentially protects clues to a past we can only imagine.