Everyone loves a good puzzle - and this was definitely found to be the case when Flavio Marzo, conservation team lead for the Qatar/British Library Project, sent an email around to colleagues with a series of mysterious symbols attached. What did they mean? The ancient doodles were uncovered by Flavio during conservation work of a manuscript from the Delhi Collection. Could the code be deciphered by British Library experts? Flavio reports.

Digitisation processes can be quite repetitive. Here at the British Library Qatar Digitisation Project we try to achieve the best we can and this means a lot of quality checks to ensure high levels of efficiency through standardised processes.

There is no difference in our approach to the conservation strand of these digitisation projects. Standardised treatments are applied daily to a great number of items that are processed and prepared to enable a good final result and to ensure safe handling of library material. Unsurprisingly, these items are unique and their content extremely fascinating.

Recently, as part of the material scoped for the second phase of the project, I had to repair a manuscript before imaging and uploading onto the Qatar Digital Library.

This manuscript contains two mathematical treaties bound together dating back to the beginning of the XVIII century. It was in need of conservation treatment because the sewing of a previous restoration attempt was impairing the opening making some of the text inaccessible and impossible to be imaged.

Those texts are now finally becoming available to readers for the first time thanks to the surrogates that we are uploading onto the Qatar Digital Library website. They all are in very poor condition and for this reason many of them have never been made available to readers in our reading rooms.

The prime concern for conservation when treating items is to find the right balance between the level of intervention necessary to make a book strong enough to be safely handled while still preserving the unique and invaluable physical features related to its history and use. These concerns are even more apparent for the Delhi Collection manuscripts since their history and the vicissitudes relating to their move to London are still quite confused.

This manuscript and the treatments carried out to conserve it are a very good example of how challenging it can be to decide what to do and where to stop, but also a very unique case of a fascinating discovery. When the little manuscript (measuring just 182 mm high, 120 mm long and only 7 mm thick) was brought to the studio its book block was detached from its cover. 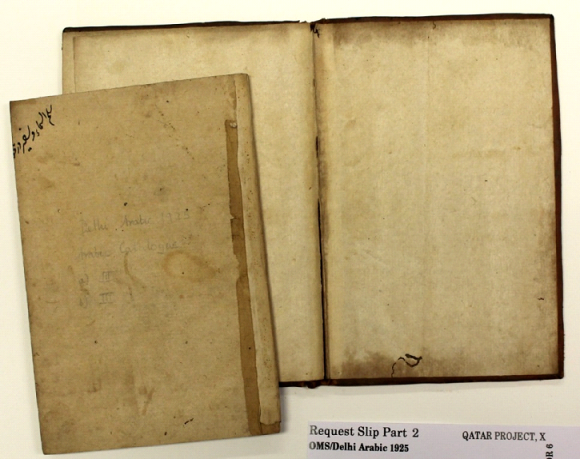 At a certain point of its life the manuscript was restored and a new over-casted sewing was made to keep the loose, badly damaged pages together. 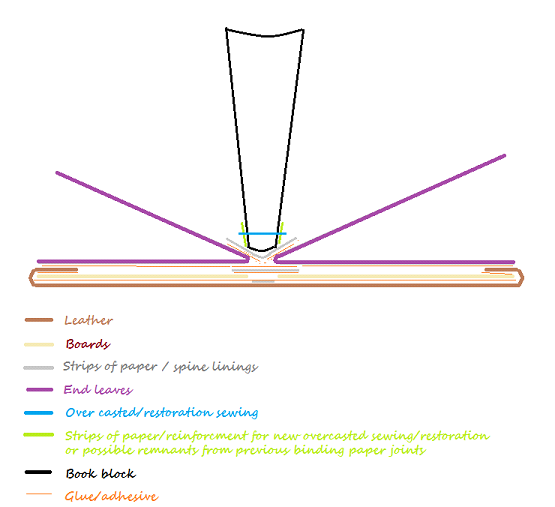 Diagram of the construction of the book block and the full leather cover.

This new sewing, even if achieving its purpose, was badly impairing the opening of the book making some of the marginal notes illegible. Annotation disappearing into the gutter before (left) and after (right) the removal of the over-casted sewing passages.

We know from historical sources that these manuscripts were moved from Delhi to Calcutta for evaluation in the view to be then transferred to London; it was during this time that they were left neglected and befell extensive damage. It was most likely around the same time that the manuscripts were crudely restored and the present cover was applied to the text.

Changes are unavoidable during restoration processes, but conservation is committed to keeping this to a minimal level and always trying to preserve evidence of past treatments while keeping detailed treatment documentation.

After consultation with the curators it was decided to remove the over-casted sewing to improve the opening. The passage holes of the sewing thread were left undisturbed and even the passages of thread on the first and last sheets, not causing any harm to the book, were left and secured in place with wheat starch paste.

Unfortunately most of the pages of the two small manuscripts, repaired even before this last restoration campaign, became loose with no clear evidence of the original construction of the sections.

Many of the sheets were attached to each other at the inner joint and it was decided, after discussion with the curators, to keep this arrangement since no other evidence of thread passages was found. New joints were made with Japanese paper to create the bifolia for the quires. 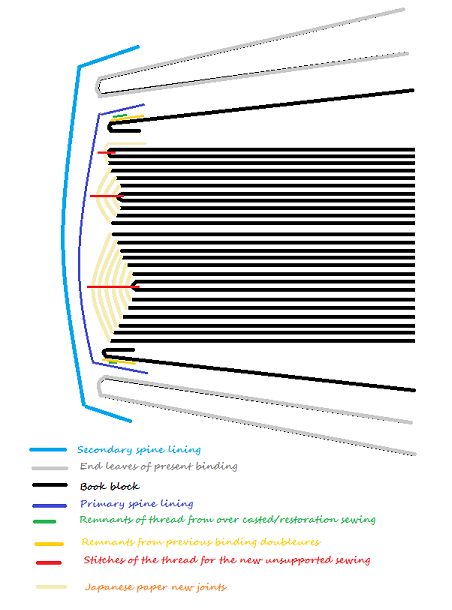 Diagram of the construction of the manuscripts after conservation.

Diagram of the construction of the manuscripts after conservation.

The three sections were sewn together with an unsupported sewing using the holes found in only three conjoint bifolia. This is represented in the previous diagram by continuous black lines.

The different layers of original spine lining were re-adhered as they were originally. The end leaves were re-connected to the book-block by gluing them along the spine edges to the first and last leaves of the book, as they were previously.

Only the front right paste down, originally attached to the inner face of the board was left detached and this was due to a very interesting discovery. During the conservation treatment of the end-leaves some hidden manuscript annotations came to light. 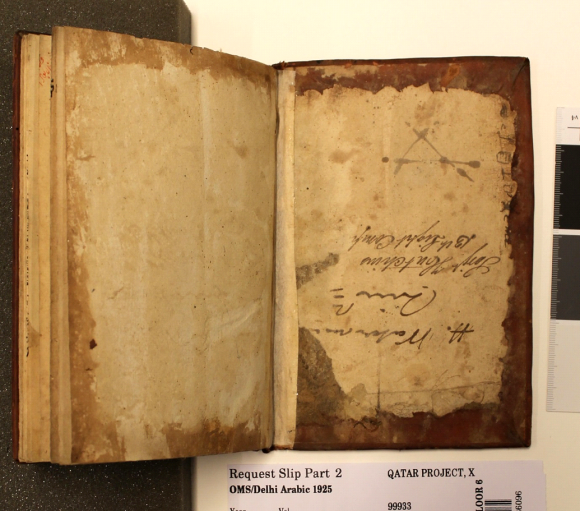 The right board of the cover was made from reused manuscript material. A couple of signatures (now under investigation) appeared, accompanied by what looked like a series of squiggles almost entirely hidden by the leather cover.

After a more careful examination it became clear that these symbols were actually much more than simple doodles. I decided to figure out how to decode them. 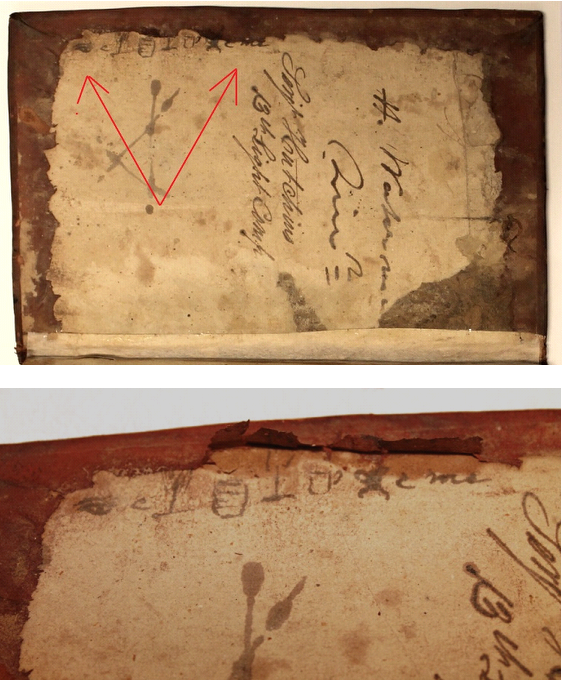 The line of symbols emerged partially obscured by the turn in of the leather cover on the fore edge of the inner right board.

An email was written with images attached and it was sent to all colleagues working here at the 6th floor within the British Library/Qatar Partnership: an open invitation to participate in the decoding. Less than an hour later the mystery was solved. The squiggles were in fact a rebus - a puzzle where words are represented by pictures and letters, and its translation came out as: I see you but you cannot see me

The breakdown is shown below: 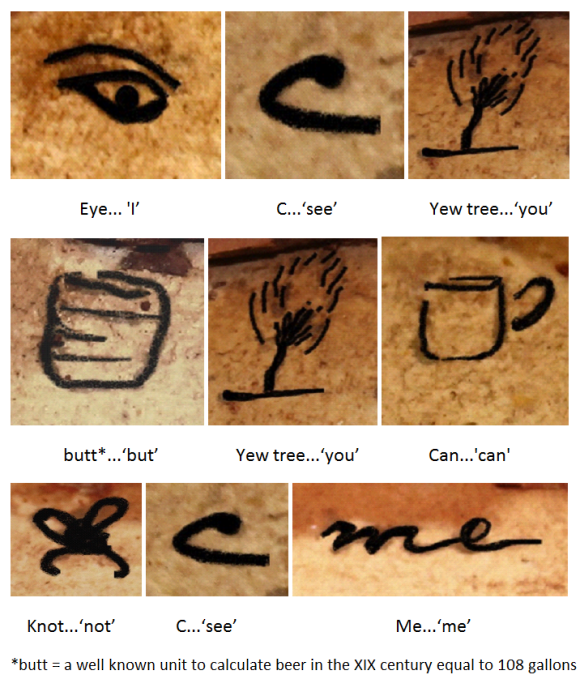 What an incredible and exciting discovery!

This really is the most appropriate motto to what I am always saying about conservation and the challenges in preserving evidence of historical clues: they are there, they look at you, but we are not necessarily able to see them.

The curator of the Arabic manuscript strand of the project, Bink Hallum, was the person who cracked most of the code. This demonstrates how tasks can be resolved through collaboration and sharing of expertise.

So many invisible pieces of information, during our careers, look at us from the items we handle everyday. We don't always have the necessary knowledge to see them, but surely we have the responsibility to preserve and convey them for posterity.