From West to East: Conservation of the Chinese novel ‘Dream of the Red Chamber’

Six volumes arrived in the Conservation studio at the British Library. They are all bound in Western style bindings, quarter bound in dark blue leather and marbled paper, and they are very much in the format and style with which you will be familiar when looking at a traditional book. 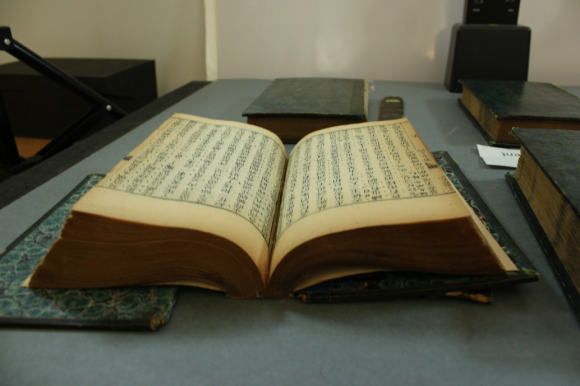 One of the six volumes, open, showing the restricted opening, detached boards and spine piece.

I discovered that these volumes contain one of the greatest Chinese novels: the Dream of the Red Chamber (in Chinese: Hong lou meng), written by Cao Xueqin in the 18th century. This edition (British Library shelfmark: 15333.a.1) was made during the Qing dynasty, and it is dated 1811. It is a printed item.

The Dream of the Red Chamber is also called ‘The Story of the Stone’ (in Chinese: Shi tou ji) and it is one of China’s greatest classic novels. Written during the Qing dynasty, this work is widely recognised as one of the pinnacles of Chinese fiction. It narrates the story of two branches of a wealthy aristocratic family (the Jia family) and gives us a vivid account of the Chinese culture and society at that time, portraying funerals, rites, cuisine and medicine aspects.

However, it is relatively unknown in the West, despite the fact that the first translation into English was produced in 1812, just one year after the production of this Chinese copy. It is curious that the original item has at some point been rebound in Western style. The size of the novel is remarkable and when bound in Western style it arrived at 23 fascicules in 6 volumes! The current Penguin books edition is longer than War and Peace!

Books and other collection items in libraries often go through several transformations by being put into a number of different bindings in their several hundred year lives. This can vary from complete rebinding from one style to the next or an amalgamation of styles, through different repairs deemed necessary over the years.

Until recent years, when an item from East Asia was ingested in a Western library’s collection, it was usually rebound with Western style technique, including a hard cover with a spine, which usually contained the title in English. It was in fact believed that in this way the items would have been better stored on the shelves and the paper would have been more protected from dust or humidity. The same happened for the British Museum Library’s items from China (now the British Library’s Chinese collection).

The British Library Lead Curator for East Asian Collections, Sara Chiesura, has informed us that more recent and contemporary acquisitions are left with the original binding and put in a custom made box for shelving. This approach goes along with the current conservation trends, which tends to intervene as little as possible on the original items, and to adopt non-invasive techniques to stabilise them.

As a Book Conservator making decisions about the type of repairs needed to a fragile or damaged binding can be very complex and you will always need to consider the evidence which gives the story of the past. Do you keep a book in its current format and make repairs? Sometimes, in fact, even if the Western style binding is not ideal for East Asian items, the binding itself becomes part of the history of the item, and can sometimes reveal information about previous owners or collectors.

Would a new binding be better able to protect the book for the future and honour its history too instead?

The repair work on these Chinese items became therefore a rare case at the British Library. After a discussion with the curators, we decided that the ‘Dream of the Red Chamber’ would have been taken out of its current western style bindings and been put into a Chinese style thread bindings, housed in wrap around ”Tao” cases. Using strong, archival materials, the 6 volumes (23 fascicules in their original format) deserved the sympathy of a return to their origins and a non-Western approach was the best option for the original fragile, thin paper and the need for gentle opening and a secure binding.

As with many Chinese books that have been rebound in Western style, the tight hard binding in contrast to the fragile and this Chinese paper often does not work. In this case, the solid animal glue at the spine created a tight opening and did not allow the bindings to open far enough to see all the text. The detached boards and spines caused much damage as well. 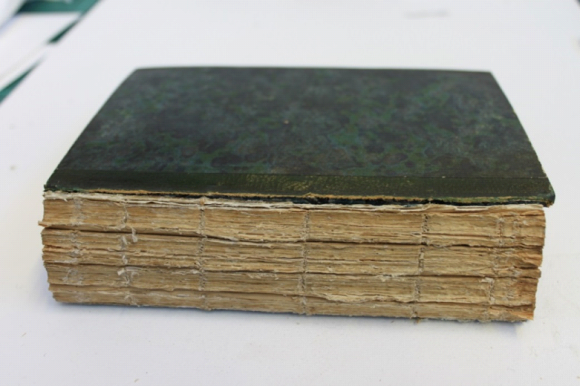 One volume after the animal glue was removed from the spine, clearly showing the divisions into fascicules of the original Chinese book and leaving the evidence of the more recent Western style binding.

Working with the item, I immediately noticed some original holes (in the paper text block), which gave me evidence of where the original Chinese thread sewing was. I could therefore reuse these original holes to recreate the sewing for the Chinese binding, tracing back the binding’s original state.

The so-called “Thread Binding” was the usual Chinese binding format in 1811. It is strong and the sewing rarely breaks. Thread bound fascicules in wrap around cases (known as “Tao” cases) would last indefinitely. They allow the flexible pages of each fascicule (which are double sheets, with the fold where the pages are turned) to open flat under their own weight and not be restricted by the spine. 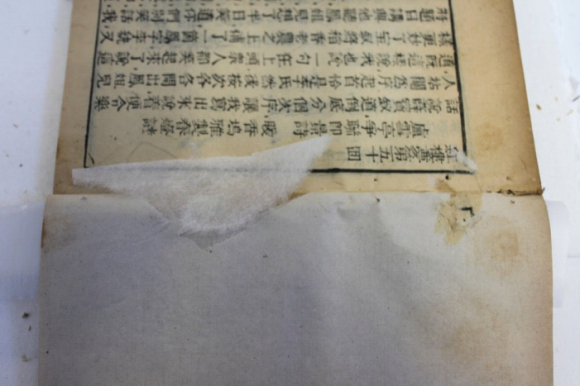 Open fascicule showing repairs to be made with Japanese tissue. 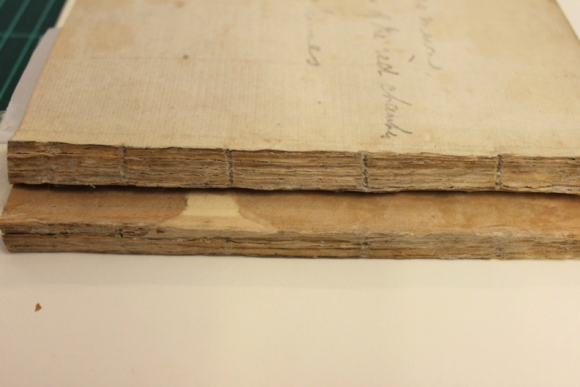 Repairs were made (with wheat starch paste, a neutral adhesive and Japanese tissue) to the delicate spine edge which is still partly glued together by the animal glue used on the previous Western binding. 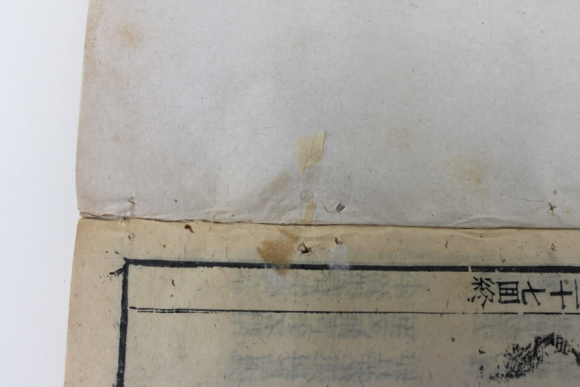 Detail showing remains of the original paper twists and their holes. 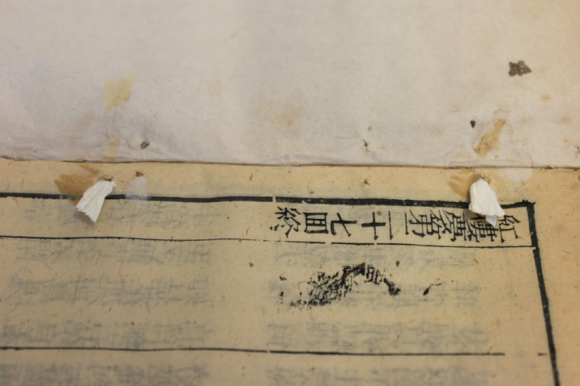 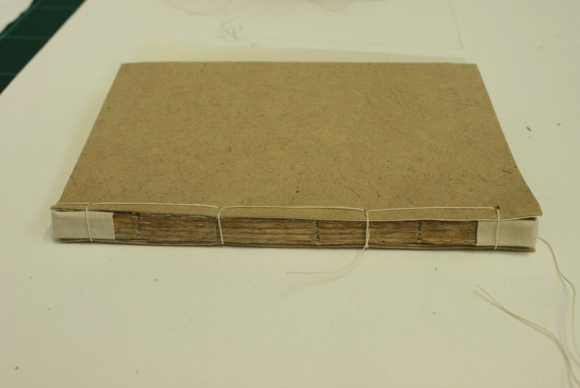 Each of the 23 fascicules were re-stitched using the 4 existing sewing holes, using a strong linen thin thread. Extra care was taken to re-use these holes by sewing with a very blunt needle. The needle then finds the hole and eases gently through without causing any damage to the fragile paper. 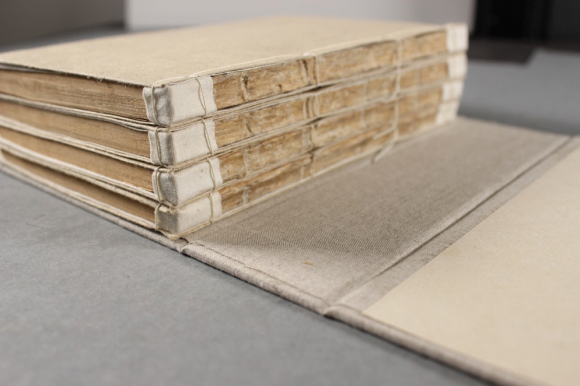 Traditionally thin silk (lined with paper) is folded around the corner of each fascicule to protect the corners and give another source of strength. In this particular case aero cotton was lined with Japanese paper. Re-sewn fascicules (with corners and covers). 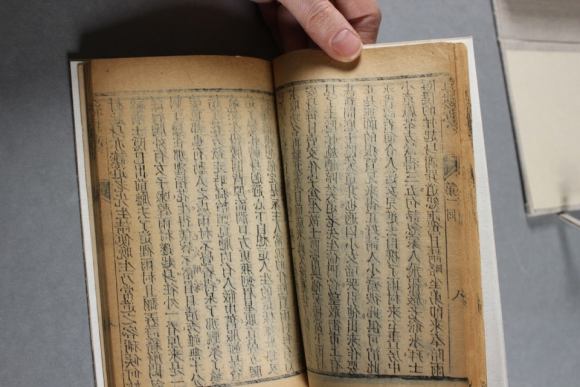 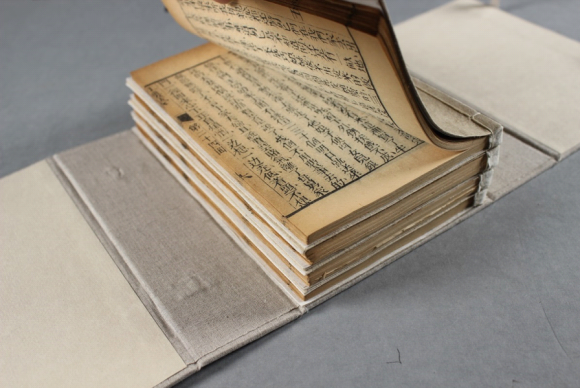 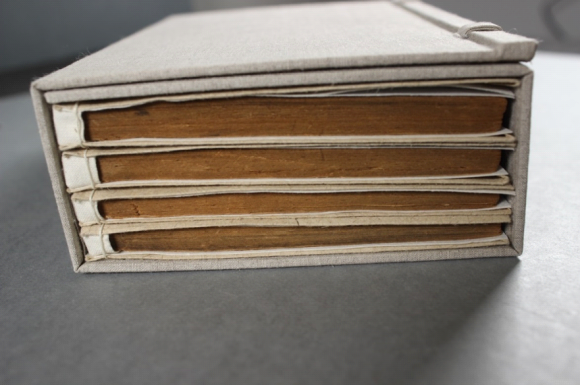 Cases (Tao style cases) were custom made to ensure the fascicules have a snug fit and give very good protection to the book. It is a big advantage of the Chinese style of binding that the elements work together but can also be separated. The wrap around case has to be exactly the correct size. If it is too tight the fascicules can bend, if it is too loose fascicules may fall out! These cases were often remade several times in the book’s life. In this case strong, archival materials have been used so correct storage and handling will ensure good protection for the fascicules and cases in the future. The wrap-around case is made of board covered in cloth, lined with paper, and then fastened with bone pegs. 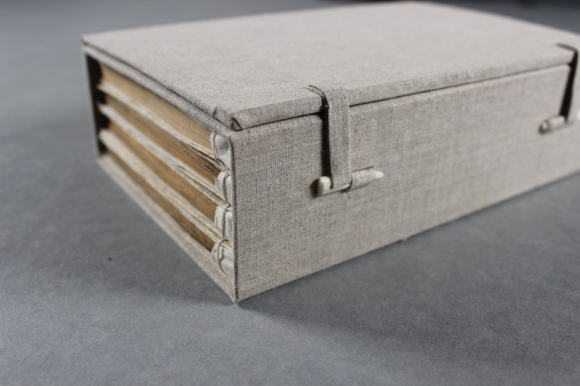 “Chinese Book” is the expression used for the whole object. For this copy of the ‘Dream of the Red Chamber’ 23 individually bound fascicules were encased in 6 wrap around cases (keeping with the format of the 6 western style volumes which arrived in the studio). 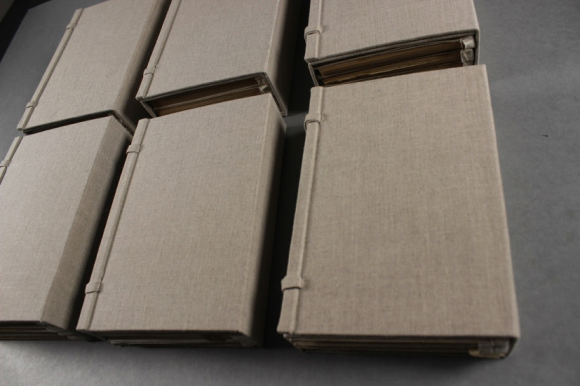 With thanks to Sara Chiesura for input on this post.

Helliwell, David ‘The Repair and Binding of Old Chinese Books’ in The East Asian Library Journal, Spring 1998, Vol. VIII, no. 1

Wood, Michael, ‘Why is China’s greatest novel virtually unknown in the west?, in The Guardian, 12th February 2016

Posted by Christina Duffy at 9:36 AM