Mounting and Framing: Preparing the Maps and the 20th Century Exhibition at the British Library 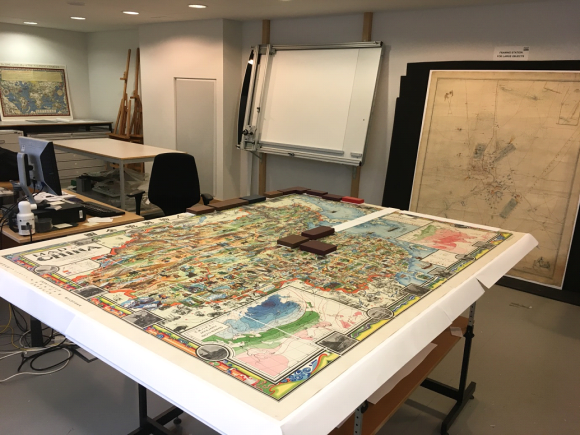 Mounting one of the largest maps in the exhibition.

The exhibition department conveys the wishes of the exhibition designers to the conservation department and together we discuss the possibilities of making that happen whilst ensuring the physical condition of the object remains unchanged throughout the whole process. At an early stage we evaluate each item together and discuss possibilities and potential practical issues. This includes assessing whether or not items need conservation treatment prior to mounting, what type of mount and what type of frame the exhibition designers have requested and will it be suitable for the item. If the object does need more than minor treatment before mounting and framing then that is further discussed with the curator.

There are many ways of mounting and framing. Museum standard conservation mounting and framing puts the best practice conservation principle of using methods that do not damage the object or speed up the degradation process in any way first. What little adhesive we do use is reversible and the different types of mount board are all acid-free archival quality boards. The works of art on paper are attached with different types of hinges made of Japanese paper and wheat starch paste. Self-adhesive tapes are never used in direct contact with any paper object, no exceptions. It is however used to attach different layers of mount board together to create a more rigid backing or when attaching the fillets to the inside of the frame to provide distance between map and Perspex. When possible we use non-adhesive solutions, such as photo corners made out of inert and transparent polyester sheeting. An example of two postcards mounted for this exhibition with handmade polyester photo-corners inside a window mount allowing the edges of the object to be visible.

A close-up of polyester photo corners on one of the postcards.

Three commonly used methods are; a ‘window mount’ where the object is hinged to the backboard and the edges of the object are overlapped by the window mount. A second option is a ‘float mount’ with regular V-shaped hinges made of varying types of Japanese tissue in combination with fillets to create distance between object and Perspex. Distance between the two is necessary to prevent potential adhesion of media to Perspex. The type of Japanese paper chosen is based on weight, thickness and relative transparency of the paper substrate. A third option is a slot mount which will allow the hinges to be slid through incisions in the back board. This option is favoured for heavier objects and/or undulating objects. Depending on the needs of the object these methods are combined and adjusted in a variety of ways.

There is a difference between temporary framing and (semi-)permanent framing. While the same best practice principles apply to both, mounting and framing an item for potentially decades, as opposed to 3-6 months, requires a different approach with different materials. For instance using any self-adhesive materials is usually the weakest link in any long-term solution. However for an item that will be exhibited for less than 6 months, the use of self-adhesive tapes can be an effective time-saving option.

Conservation grade self-adhesive tapes are a reliable and useful material because they will not degrade significantly within six months. Using tapes also reduces the time required to remove items from frames and mounts as opposed to a conservation quality adhesive such as EVA, which makes it a desirable option for shorter exhibitions.

For permanent framing other factors become relevant. For instance the bare wood on the inside of the frame might off-gas and cause the paper to discolour over long periods of time. This might not happen with modern frames in combination with temporary framing methods, but it could potentially happen when works of art on paper are exhibited or stored in frames indefinitely. To prevent this, a barrier is created by applying a layer of inert material between wood and the mounted object.

The same idea applies to light sensitivity of media on works of art on paper. Longer exposure means a larger risk of fading or discolouration of the media and/or paper substrate over time. Our preventive conservators work with the exhibition department to establish the best compromise between causing the object the least potential damage whilst making sure there is sufficient visibility for visitors to be able to fully appreciate the objects.

However with (semi-)permanent exhibitions the amount of light accumulates over the years, increasing the risk of damage. One way to alleviate this risk is to invest in a type of Perspex that is not only anti-static, low reflectance, low scratch, light weight, but also 99% UV filtering. High quality conservation glass that is low reflectance, shatter proof and 99% plus UV filtering certainly does exist, but apart from being costly the sheer size of the maps in this particular exhibition exclude the option of glass due to weight. 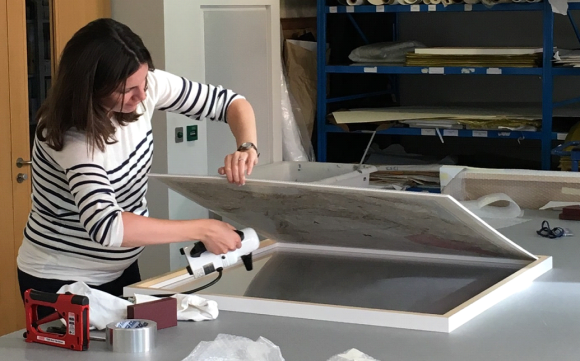 Lizzie Martindale framing one of the maps for the exhibition.

Almost all of the maps for this exhibition were mounted and framed exclusively for the four month exhibition that opens on 4 November 2016, but there are a few that were framed for permanent housing. After the exhibition ends on 1 March 2017, these objects will return to storage in their current frames. This was done at the request of the curator who expects these items to be requested for loans and other exhibitions in the future. One example of that is My Ghost 2000-2016 by Jeremy Wood1 (see picture) which was slot mounted onto white mount board with Japanese Paper hinges and wheat starch paste and further adhered to two sheets of cross-lined conservation quality corrugated board with EVA adhesive to make a more rigid mount. The inside of the wooden frame was covered with a barrier layer and the fillets were adhered to the inside of the frame with reversible EVA adhesive. 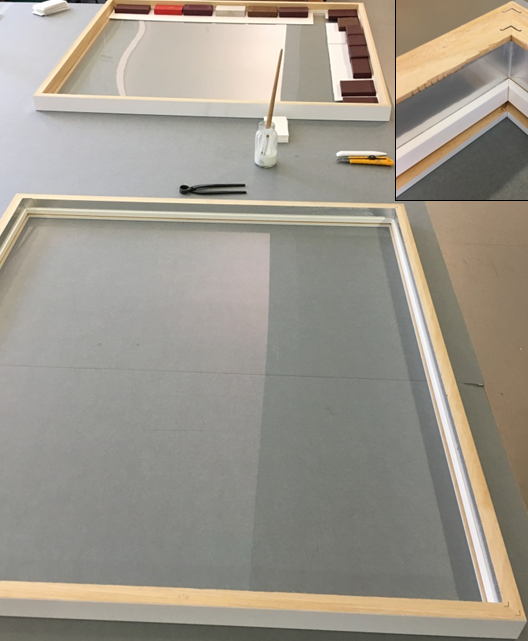 Frame in front has barrier and fillets adhered to inside of the frame and is ready for the map. Frame in the background shows fillet drying with weights keeping them in place. 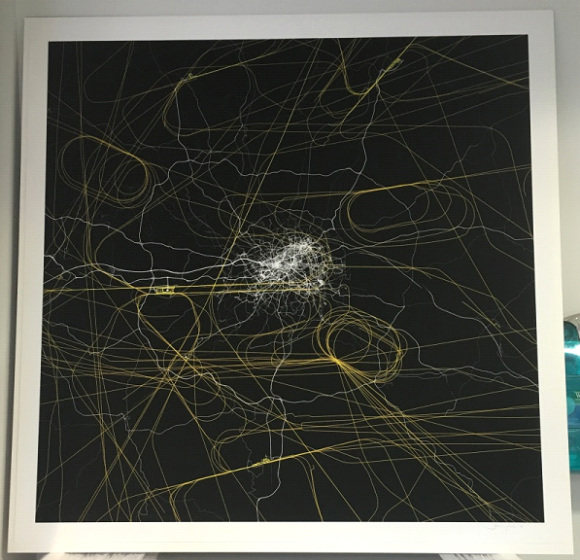 Mounted object ready to be framed.

1 My Ghost 2000-2016 by Jeremy Wood (Maps CC.6.a.83)
From the 1990s Global Positioning Systems (GPS) technology became increasingly available to civilian use, most prominently in car navigation. Artists also came to appreciate the use of GPS for capturing, commemorating and commenting upon patterns of existence. Jeremy Wood pioneered drawing with GPS, using a receiver to track his movements, using his body as a ‘geodesic pencil’. This print shows 16 years of Wood’s movement around Greater London, the white lines representing his movement by foot, bicycle and motorised transport, the yellow lines by aeroplane. Lines occasionally abruptly stop, reminding us that even digital mapping can occasionally fail.

The majority of maps for the Maps and the 20th Century: Drawing the Line exhibition where float mounted with V-shaped Japanese paper hinges onto white museum mount board to complement the white frames. The joy of conservation mounting and framing is that one often has to come up with creative solutions in the moment because a work of art on paper will have special requirements that make it impossible to use one of the standard methods. One example within this exhibition was Maps C.49.e.56, Post-War New World Map published in Philadelphia in 19422. This map has its own decorative and protective binding. The map could not be temporarily removed for the exhibition without causing damage to both volume and map so it was decided to incorporate the volume inside the mount so as not to have to separate the two. 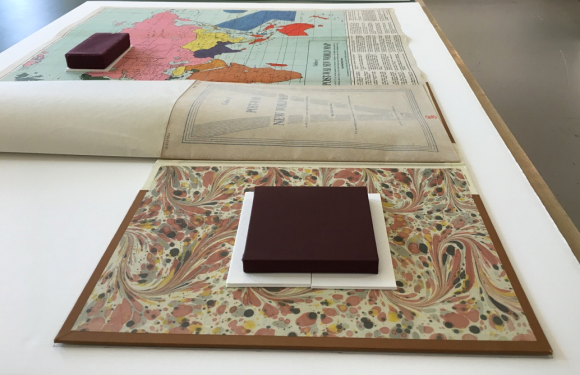 Measuring the edges of the binding on to corrugated board.

2Author: Maurice Gomberg. Shows protectorates and peace-security bases. Title continues: As the U.S.A., with the cooperation of the democracies of Latin-America, the British Commonwealth of Nations and the Union of Soviet Socialist Republics, assumes world leadership for the establishment of a new world moral order for permanent peace, freedom, justice, security and world reconstruction.Citation/references note: The Wardington Library: important atlases & geographies, property of the late Lord Wardington and the Pease family. 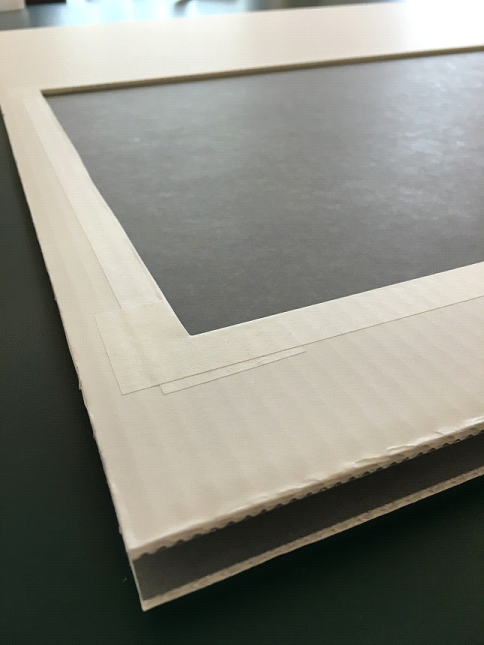 The cut away was covered with self-adhesive tape with a paper backing to cover any sharp edges. Making sure the binding fits; height and width as well as depth. 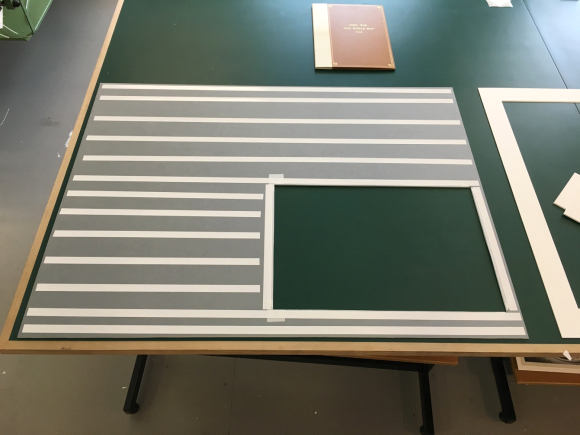 The corrugated board covered with double sided archival quality self-adhesive tape so that the next board layer can be attached efficiently (without drying time). None of the tapes used are in direct contact with any of the objects. 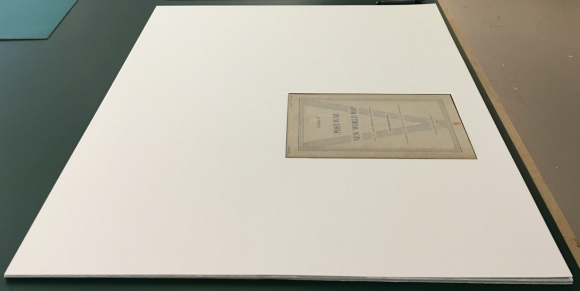 Layer of white museum mount board attached with self-adhesive tape to the corrugated board underneath. 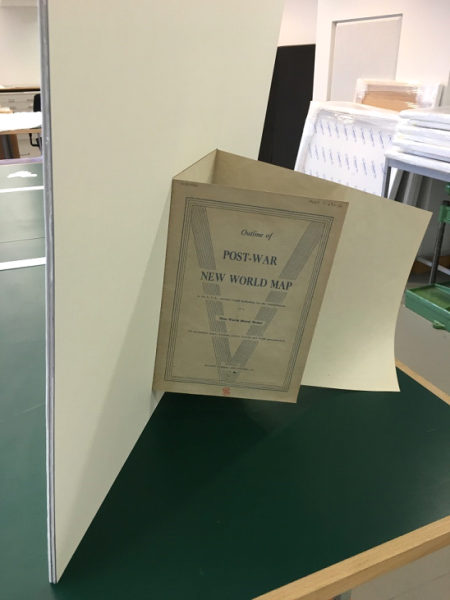 Making sure the volume is secure within the multi-layered mount. 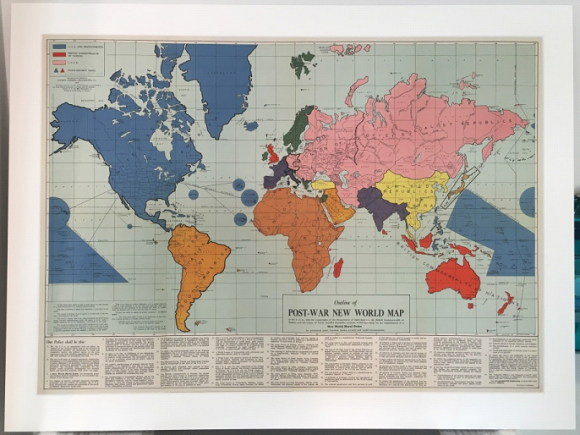 After unfolding the map the edges are adhered to the museum mount board using Japanese tissue V-hinges and wheat starch paste.

Within this exhibition many large maps were framed in standard frames, but there were four maps so large that a box frame was a better option. A box frame in this context is a frame built around the mounted object and attached directly to the wall. The maps were slot mounted onto corrugated mount board with a border of white Japanese paper to cover the edges underneath. The weight and undulation of these larger maps meant that it was needed to distribute the weight by not only using hinges around the edges but also dispersed integrally and to have one large hinge just above the middle. The hinges were attached to the back of the map with wheat starch paste. The hinges were slotted through and attached to the back of the corrugated board with EVA adhesive and a second cross-lined layer of corrugated was attached to the back for added support and rigidity. The benefit of this material, besides being of conservation quality, is that it is lightweight yet rigid and can be ordered in very large sizes. Finally the layer of white Japanese paper was adhered to the back of the corrugated with EVA adhesive. 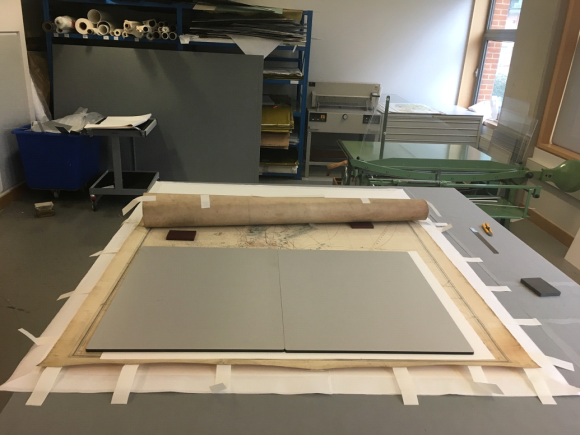 The positions of the hinges are marked with an awl and incisions are made along the edges so the side hinges can be slotted through. But first the hinges dispersed along the back of the object are adhered to the corrugated mount board with wheat starch paste and left to dry under weights. 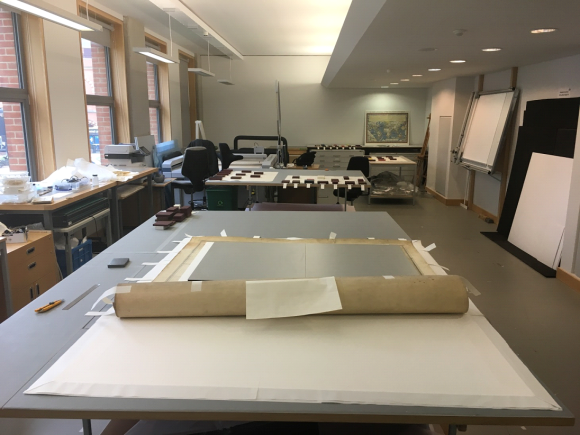 Seen from the opposite side. 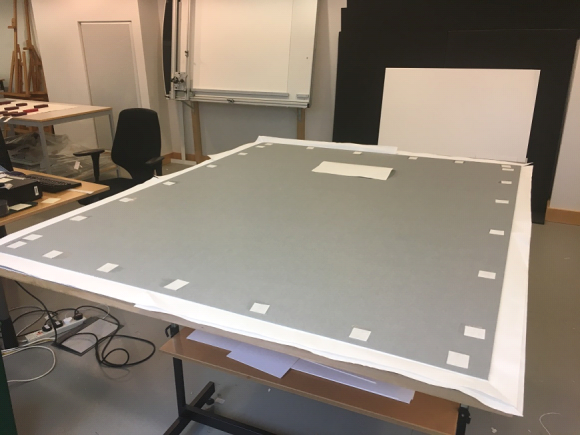 Hinges were slotted through and adhered to the backboard. Larger hinge can be seen above middle. 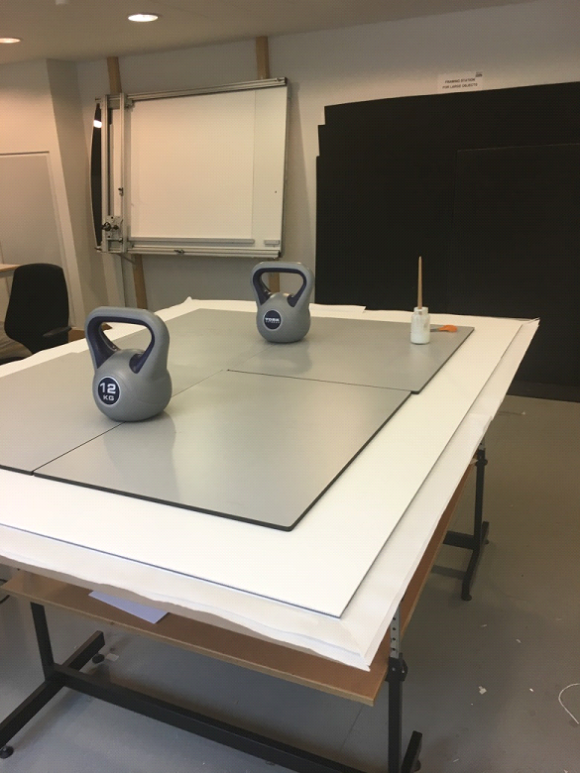 Second layer of cross-lined corrugated board is adhered on top with EVA adhesive. The layer of white Japanese paper to cover the board edges is now ready to be wrapped around and adhered to the back of the corrugated board. 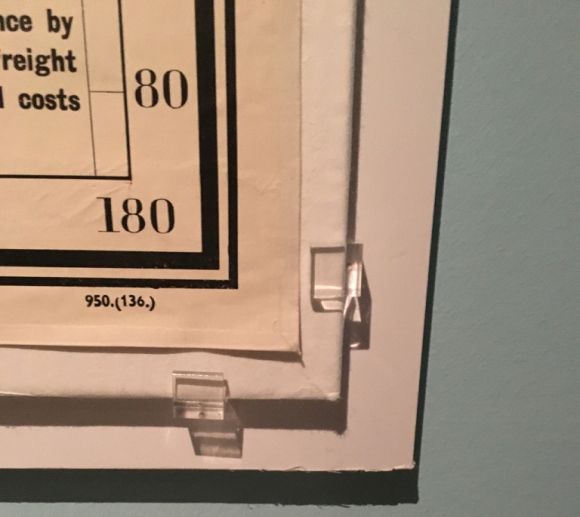 Working on this project and getting to see the exhibition take shape over the last few months has been very rewarding. I’d like to especially thank Janet Benoy, Mark Browne and Tom Harper for their support every step of the way and to Lizzie Martindale, Julia Wiland, Daisy Todd, Rick Brown, Jenny Snowdon and Gavin Moorhead a wholehearted thank you for helping with the mounting and framing.

Book now to visit Maps and the 20th Century: Drawing the Line.

Posted by BL Collection Care at 11:12 AM