In the British Library Conservation Centre there is a small plaque commemorating four members of the former British Museum Bindery staff who were killed in the First World War. 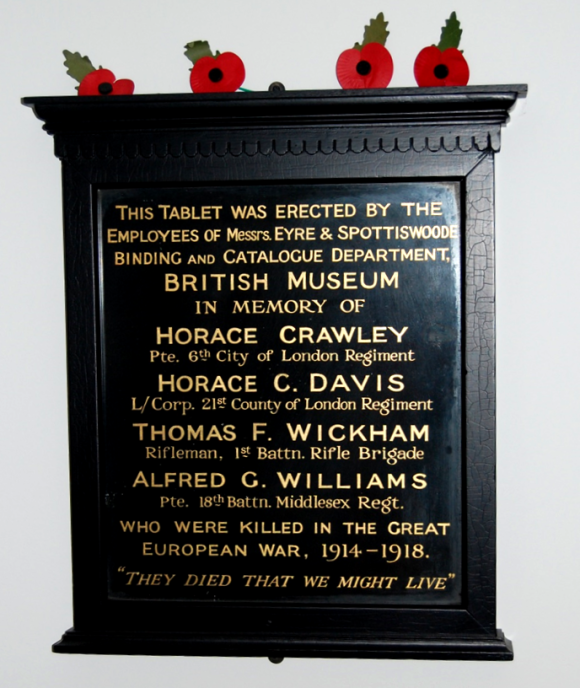 Until 1927 the work of binding and restoring the library's collections was contracted out to private concerns. The earliest contractor was appointed in 1760 and in 1881 the firm of Eyre and Spottiswoode was awarded the contract to supply binding services to the Museum Library. In 1927, His Majesty's Stationery Office (HMSO) took over the Bindery and continued until April 1982 when the staff of the binderies became employees of the British Library.

The four men commemorated are Pte Horace Crawley, L/Corp Horace Davis, Rifleman Thomas Wickham and Pte Alfred Williams. I have been trying to discover a little about who they were and when and where they died. The main source of information is the Commonwealth War Graves Commission (CWGC)’s website, which gives details of all casualties and where they are buried or commemorated. Further information can be found at The National Archives in the War Service records and the battalion War Diaries. The War Service records show when and where each person joined up – unfortunately they are incomplete as many were damaged or destroyed by enemy action during the Second World War. The Commanding Officer of each battalion wrote a brief summary of each day’s events in a War Diary: these usually state where each unit was and may give details of the actions they were involved in.

Three of the men could be identified without difficulty from the CWGC website.

Lance-Corporal, 21st Battalion, The London Regiment (1st Surrey Rifles). Service no. 1786. According to his War Service record, Horace Davis joined up on 7 August 1914, one of many who volunteered in the wave of patriotic enthusiasm that swept the country immediately after the declaration of war on 4 August. He gave his age as 17 years and 4 months, and his occupation as Catalogue Assistant at the British Museum. He was the son of Edwin and Maria Davis of Chryssell Road, Brixton. He died on 15 September 1916, aged 18, at the battle of Flers-Courcelette and is buried in Warlencourt Military Cemetery, on the road between Bapaume and Albert, Pas-de-Calais. (If the age on his gravestone is correct, he would only have been 16 when he joined up.)

The 1st Surrey Rifles moved to the Somme front in July 1916, and on 10 September joined the line at High Wood. As part of the battle of Flers-Courcelette they moved into Mametz Wood on 15 September and then attacked a German trench, the Starfish Line. According to the War Diary:
“4.45pm. Battn advanced in artillery formation to the attack with a fighting strength of 19 Officers and 550 ORs [Other Ranks]. Arrangements could not be made for artillery support or adequate covering fire, and as the leading platoons came under observation they were subjected to an intense artillery bombardment and later to heavy rifle and machine gun fire. The casualties in this advance amounted to 17 Officers and 490 other ranks, of whom a large percentage must have been killed by heavy shells. The remaining officers and a few NCOs and men dug themselves in and held on to what ground they could occupy until the Battn was ordered to withdraw at 7.30am on the 16th.”

This was the first battle in which tanks were used, though in a different part of the field. 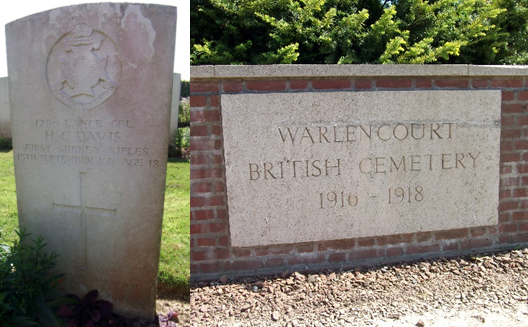 Rifleman, 1st Battalion, The Rifle Brigade. Service no. B/203615. Son of Thomas and Elizabeth Wickham of Twisden Road, Kentish Town. Died 23 June 1917, aged 41. No known grave, but commemorated on the Arras Memorial, which honours those who died in the Arras sector between Spring 1916 and August 1918.

In June 1917 the 1st Battalion was operating east of Arras, south of the River Scarpe. The War Diary states:
“June 22/23. During the night of 22/23 Battalion HQ moved to [map reference] H30 d2.5 in bank near Lone Copse [south of Fampoux and west of Pelves]. I Coy moved up to Welford Trench.
June 23. At 1030pm B Coy made a raid on the enemy’s trenches in I25 b, resulting in the capture of 1 officer and 6 ORs, and accounting for about 35 others.”

The account is incomplete but it is possible that Wickham was killed in hand-to-hand fighting during this raid on the German trenches, which would explain why his body could not be recovered. 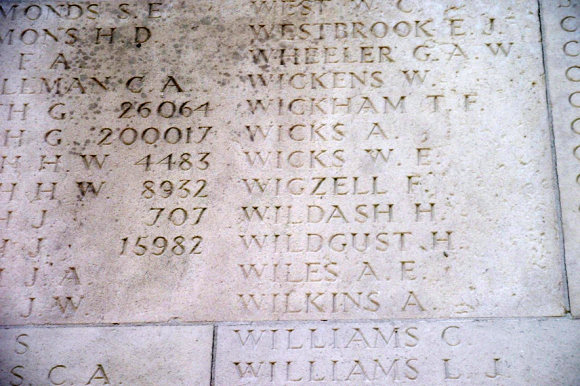 Thomas Wickham’s name appears on one of the huge walls of the Arras Memorial. 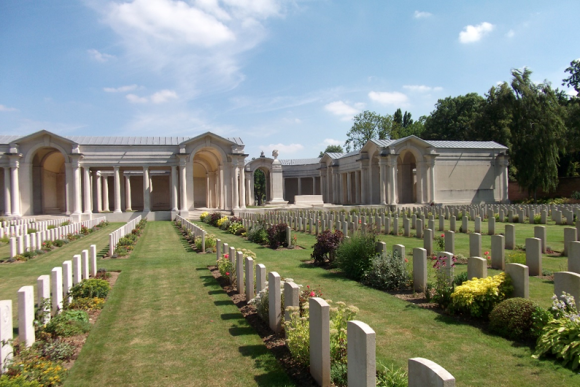 The Arras Memorial lists the names of 34,785 men who have no known grave.

Private, 18th Battalion, The Middlesex Regiment (1st Public Works Pioneers). Service no. 204113. Son of Alfred and Charlotte Williams of Eresby Road, Kilburn. Born in Willesden on 20 December 1897 and worked in the Book Department at the British Museum. Joined up on 28 June 1915, giving his age as 19 though he was only 17 years and 9 months. Died of wounds 11 October 1918, aged 20. Buried in Etaples Military Cemetery, Pas-de-Calais.

The Pioneers provided support services to the front line, repairing trenches, tunneling, laying rail tracks, revetting canals etc. Many of the men were miners or had experience in heavy construction. In September 1918 the 18th Battalion was working west of the Canal de St Quentin, between Cambrai and St Quentin, making roads passable and demolishing damaged bridges. The War Diary gives little information, but records that on 26 September the battalion was working on the 33rd Divisional HQ and approaches, and on the preparation of the Etricourt – Heudicourt horse transport tracks. 2nd Lieut. Howell and four men were wounded and eight killed. Williams was seriously wounded in the left arm, left leg and chest and was evacuated to the 3rd Canadian General Hospital in Dannes-Camiers (between Etaples and Boulogne) where he died on 11 October. 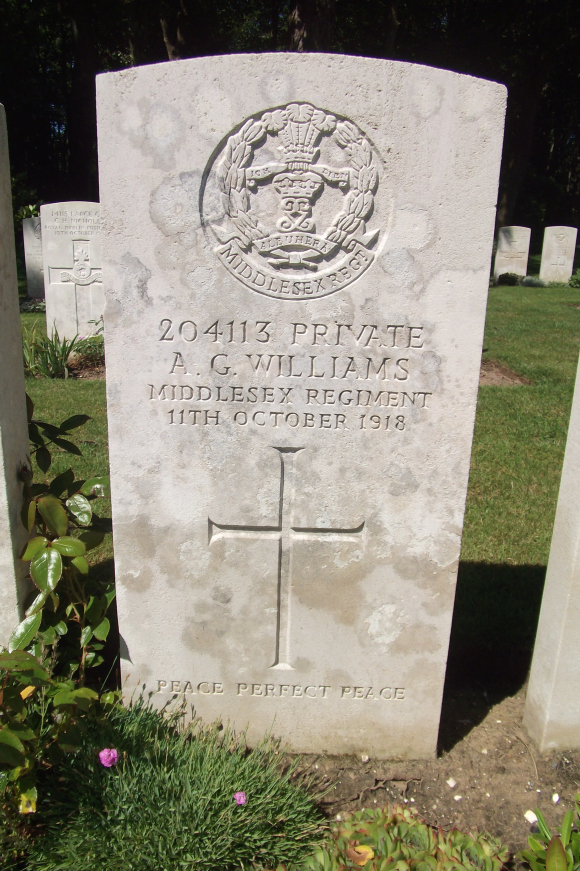 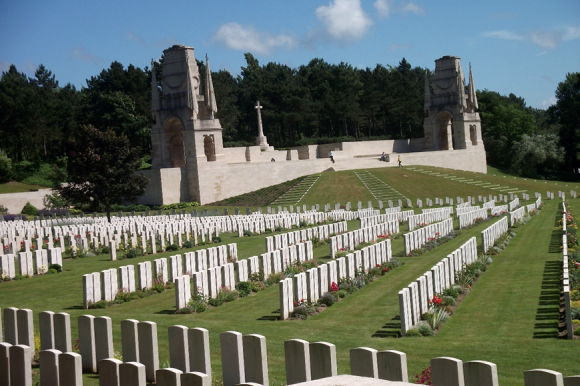 This leaves us with Horace Crawley. Nobody of this name appears in the CWGC database; the only casualties named Crawley from the 6th Battalion, London Regiment are T H Crawley (no first names or age given) and Ernest Victor Crawley. Further searching revealed that T H Crawley is commemorated on the Mill Hill War Memorial, and the related website suggests that this was probably Thomas Horace Crawley, who is also commemorated on the Crawley family gravestone in the churchyard of St Mary’s Catholic Church, Kensal Green. His date of death matches that in the CWGC database, so we can be reasonably certain that this is the right person. However, his parents lived in Barnsbury, so it is not clear what links Kensal Green, Mill Hill and Barnsbury.

The 6th Battalion, London Regiment was known as the Printers’ Battalion because many of its members were recruited from Eyre & Spottiswoode’s printing works. Early officers included George and William Spottiswoode. The battalion was stationed near Vimy Ridge from March 1916, and according to the War Diary:
“6th April. Battn in billets at Villers au Bois [about 5km NW of Arras]. Baths at the disposal of the Battn from 8am to 12 noon and from 2pm to 6pm. All ranks bathed according to orders issued. All ranks washed and greased their feet before going into the trenches. The major, adjutant and Company Commanders went to reconnoitre the left sub-section, Carency section prior to taking over. 5 officers and 250 ORs detailed to work under REs [Royal Engineers] on Cabaret Rouge. Lieut Col M A Mitchell CMG returned from England.
April 7th. Battn in billets at Villers au Bois. Battn paraded at 9.45pm for the purpose of proceeding to the trenches, left sub-section, to relieve the 17th Battn London Regt. Owing to heavy shelling by the enemy of our communication trenches relief was delayed for an hour. Order of relief, Front Line C Coy, Quarries B Coy, A Coy in cellars at Ablain St Nazaire, D Coy in dugouts, Sunken Road, Ablain St Nazaire. Relief complete at 1.25am. 1 officer and 60 ORs remained at Villers au Bois as a permanent working party (under RE).
April 8th. Battn in the trenches. There was good deal of sniping activity immediately after dawn. The enemy shelled Cabaret Rouge with shrapnel. 1 officer and 60 ORs wounded.”

It is possible that Crawley was killed by the shelling of the communication trenches or by a sniper. He was presumably known to his colleagues in the Bindery as Horace rather than Thomas, which is why that name appears on the memorial. 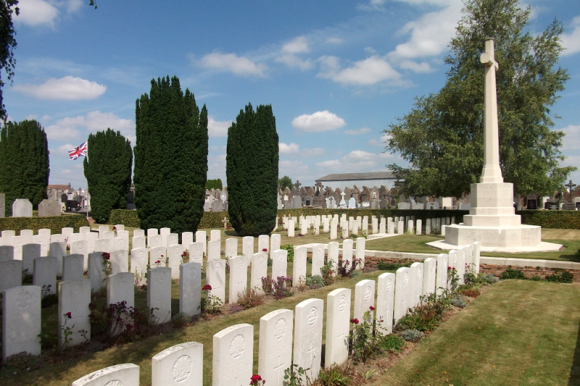 Horace Crawley is buried in the British section of Hersin Communal Cemetery. 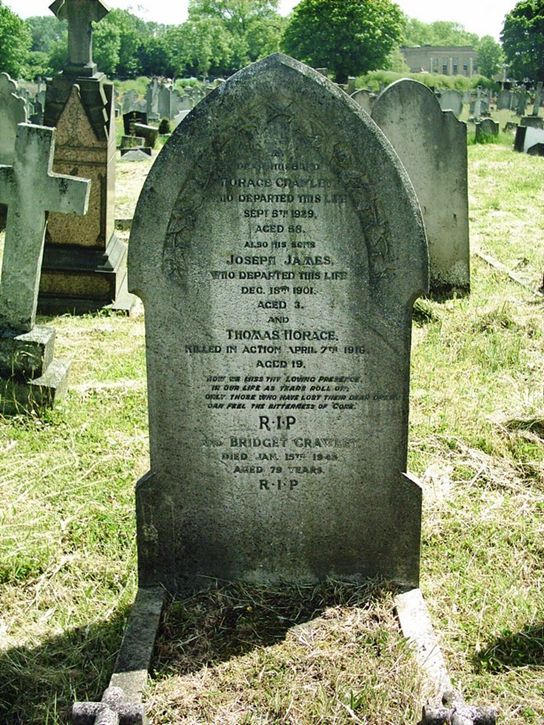 The Crawley family grave in Kensal Green (from the Gravestone Photographic Resource).

From this gravestone we can see the sadness of the Crawley family: Horace’s younger brother Joseph died when he was only 3 and Horace was killed when he was 19. Mr Crawley died in 1929 and Mrs Crawley lived on until 1943.

So there we have it: three young men who joined up, presumably thinking that fighting would be more exciting than book-binding, and an older man who certainly did not have to fight (conscription for men up to the age of 41 was not introduced until January 1916), but who maybe volunteered out of a sense of duty. We salute them.

Posted by BL Collection Care at 12:00 AM