The Conservation and Spectroscopic Analysis of a Burmese Concertina Binding

Last year I was asked to conserve a high profile, yet highly degraded late 18th century Burmese Concertina binding (OR.3591). Almost everything that could go wrong with a paper-based manuscript had gone wrong with this. It was mouldy, it had pest damage, the media was coming off the paper, and there were significant losses of the paper substrate which had compromised its handling and legibility. Consequently the item was deemed ‘unfit’ for use by the British Library, and was in desperate need of conservation.

A concertina binding, also known as an accordion binding, is a binding method that sits somewhere between a modern sewn book and an ancient scroll. Concertinas are customarily a long sheet (see Diagram 1), or multiple adhered sheets (see Diagram 2), folded vertically into panels, which can then either be displayed as a continuous sheet, or picked up and read like a book (making it far easier to handle than the often cumbersome scroll). 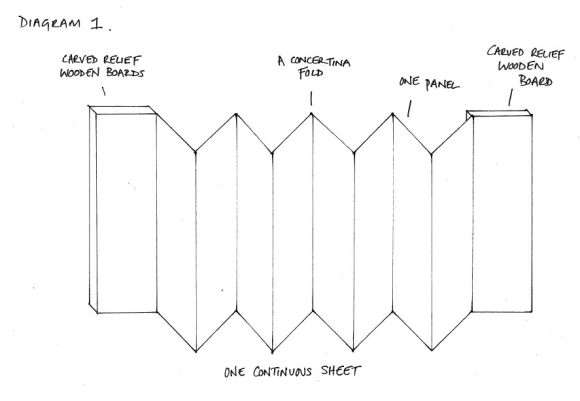 Fig. 1 A concertina binding like OR.3591, formed of one continuous sheet of paper. Fig.2 A concertina binding formed of multiple sheets adhered together. 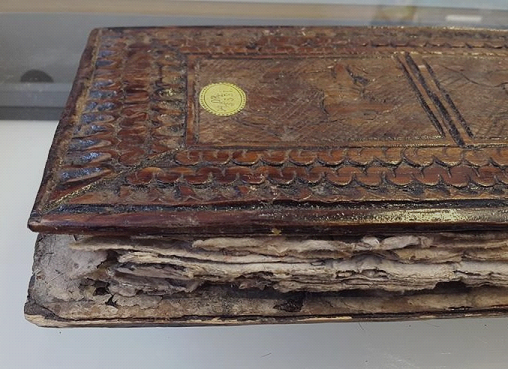 This concertina was formed of one continuous sheet of handmade light brown long-fibred eastern paper (see Diagram 1), folded into 24 panels, between two dark wood boards with carved relief designs. Coloured paint and inks on a white ground adorned both sides of the paper. Side A illustrated Buddhist cosmology and side B illustrated fortune telling. The manuscript was acquired from a collector by the British Museum in 1888. The accompanying letter reads:

“This book was found by me in the Laywun hut at Thatwé which is about 20 miles S.E of Yamethin in upper Burmah. Thatwé was occupied on the 10th December 1886 by a column of the 3rd Brigade under the command of the Brig. Gen W.S.A Lockhart.

The Burmese interpreter informed me that the pictorial side represents the progress of a saintly man from the nethermost regions to the acme of all goodness. One man shown upside down is the supposed after reaching an exalted position, to have led an immoral life for which he was sent down.

The tables on the reverse are those from which the horoscopes are worked out- every Burman always carries a horoscope." 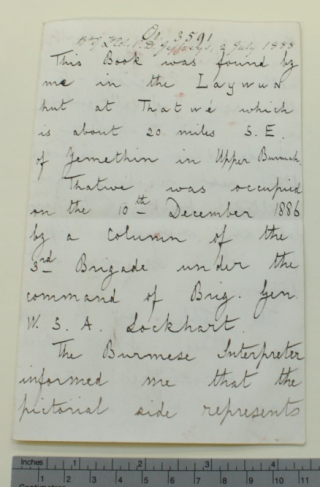 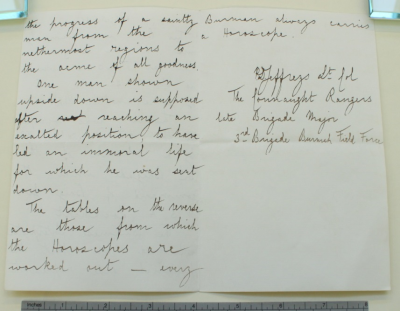 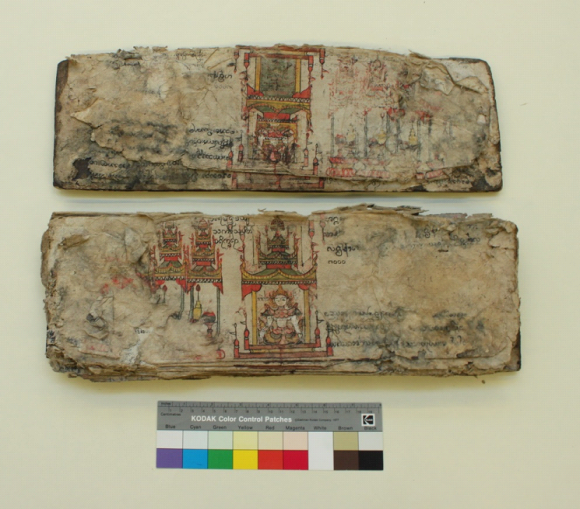 The paper was soft, weak and fragile to handle, distorted, holey and creased. The manuscript was in two parts, having torn down one of the fold-lines. There were also extensive losses on each panel, due in part to rodent damage.

The manuscript had also obviously been exposed to water at some point in its lifetime as there were clusters of black spots, which were identified as inactive mould. The water had also stuck the folded panels together, which had later been forced apart, skinning (or tearing off) the top layers of the paper, leaving them stuck to the opposing panels. 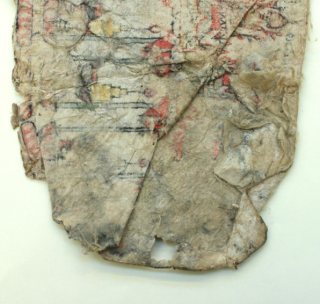 Fig.8  OR.3591 Skinned, creased and torn panel edge with off-set accretions and media. 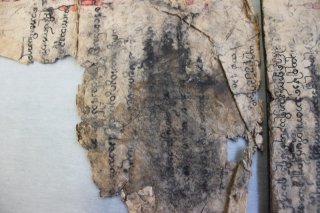 Water damage had also solubilised the media, causing it to smudge and offset again onto apposing panels. When examined under microscopy the paint was powdery or ‘friable’ and was coming off the paper, suggesting the paint’s binder was exhibiting stronger cohesive rather than adhesive properties, and had ultimately failed in its utility.

Portable X-ray Fluorescence (p-XRF) Spectroscopy is a non-destructive elemental analysis technique for quantification of nearly any element from Magnesium to Uranium, which enables conservation professionals to identify pigments. Precisely identifying pigments governs the succeeding conservation treatment as some pigments can be adversely affected if treated incorrectly - for example some discolouration if exposed to some solvents. Identifying the pigments also gives invaluable insight into the history, materiality and manufacture of the manuscript. 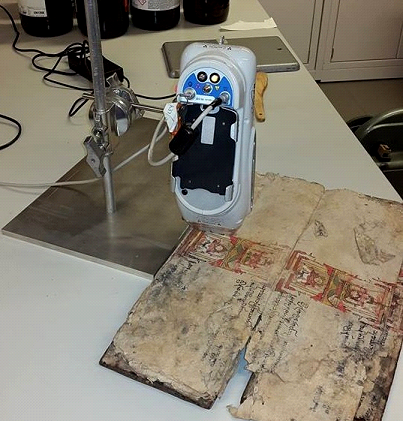 Fig.12  OR.3591 Analysing pigments via use of p-XRF spectroscopy.

P-XRF analysis was carried out using a Bruker ‘Tracer-III SD’ portable device, and the resulting data was then compared against suitable reference data to determine the identities of the pigments. Four pigments from the manuscript were examined: red, white, yellow and green. In addition, the composition of the underlying paper was also assessed, and this datum was used as a ‘background’ so its influence could be removed from the results.

* Elements given in parentheses are present in minor quantities.

The manuscript was first photographed, and then the media cross-sectionally solubility tested with deionized (D/I) water, ethanol and a 50:50 mix. All media was soluble in water and 50:50.

The dry surface mould was brushed gently with a sable brush into a HEPA filtered vacuum according to COSHH standards. Extreme care was taken during this process to limit loss of original media. To ensure absolute mould deactivation, the recto and verso of mould damaged areas were treated via local application of ethanol using a fine brush.

The manuscript was humidified in a controlled environment using a blotter, Bondina and Gore-Tex stack covered with a polythene sheet. This process relaxed the paper and reduced its distortions, enabling me to accurately realign the fibres, creases and tears using tweezers. 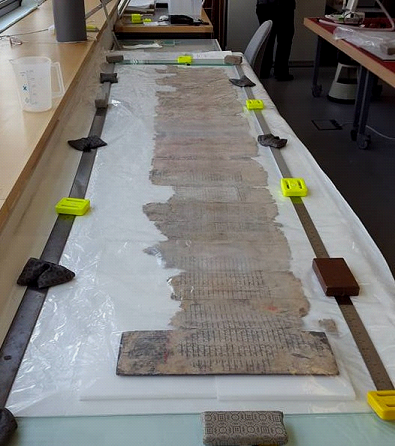 Straight after humidification the media was consolidated. Jun-Funori, a pure Japanese algae-based consolidant was made up to a 1.4% and inserted into a nebulizer. The nebulizer, which dispersed the consolidant in a fine mist, was then passed cross-sectionally over each panel on each side. The process was repeated twice until friable pigment was sufficiently consolidated, and the manuscript was left to dry. Jun-Funori was selected for the consolidant because it has documented success at consolidating friable media and it has a low refractive index so it is suitable for matte pigments. When emitted via nebulizer the particles penetrated between the friable pigments, adhering them to the paper. 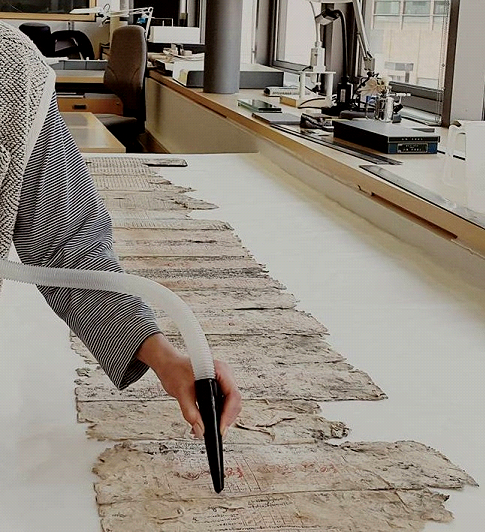 Fig.15  OR.3591 Consolidating the friable media with Jun-Funori emitted in a fine mist via nebulizer.

A Japanese kozo paper ‘Nao 2.2’ was selected for infills and repairs due to colour, weight and availability. The paper was not toned as this would have taken up a large amount of time, and its likely inconsistency would have been more visually distracting than the selected paper.

The tears and holes were repaired with the kozo paper, torn and trimmed so the edges were neat but fibrous, and adhered with wheat starch paste (WSP). The losses were infilled with three layers of the paper, needled out along the loss edge, and adhered onto the manuscript again with WSP. This tri- laminate infill was of equal-weight to the manuscripts paper as desired. 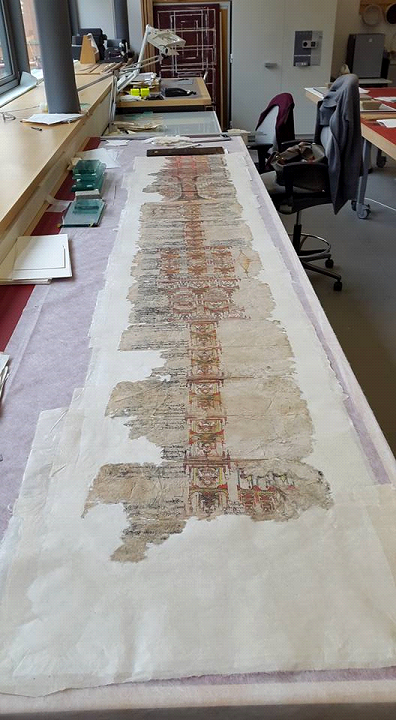 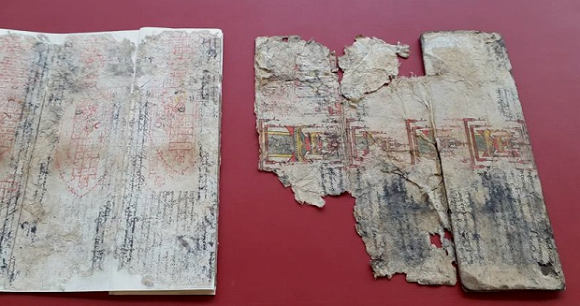 The infills were trimmed with a straight-edge and scalpel and the manuscript refolded using a bone folder. The manuscript was finally re-housed in its original (cleaned) box. 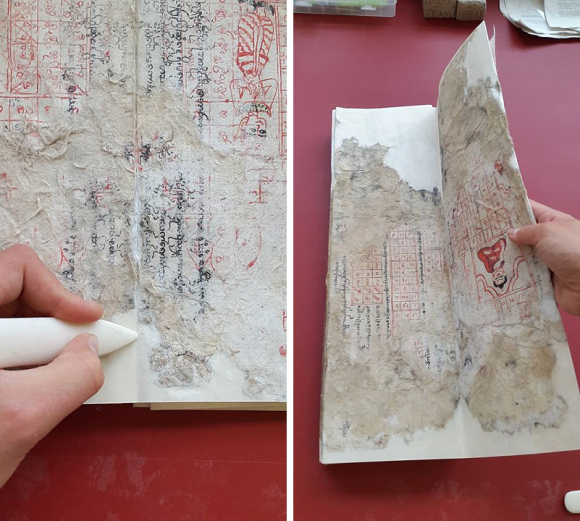 Figs.18 & 19  OR.3591 Folding the conserved manuscript back into its original concertina format.

The overall treatment took 113 hours, due to the sheer size of the object and the number of infills that needed to be carried out. The manuscript is now back in use and can be requested by readers - job done! 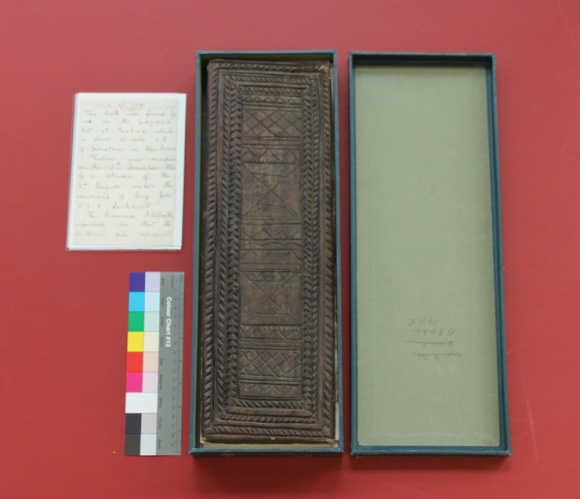 Fig.20 OR.3591 The conserved item having been returned to its original box. 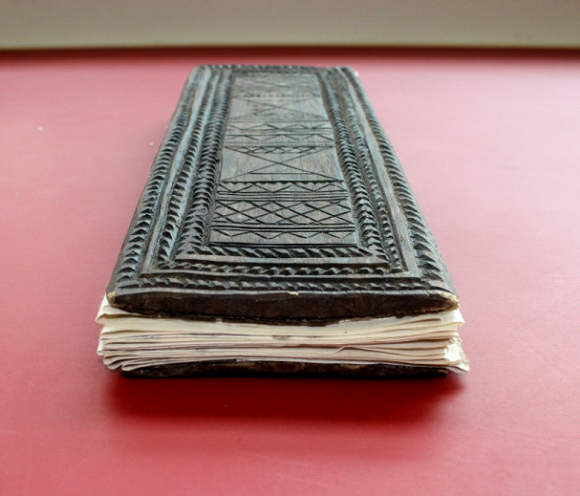 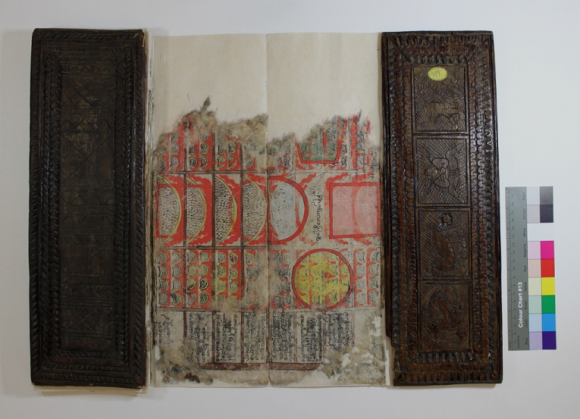 Fig.23 OR.3591 A section of Side B showing Burmese horoscopes. 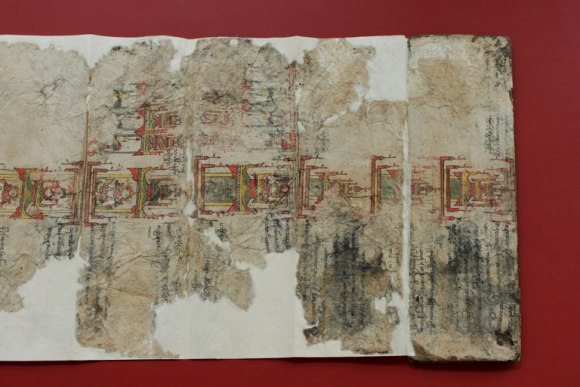 Fig.25 OR.3591 A section of Side A showing Buddhist cosmology. 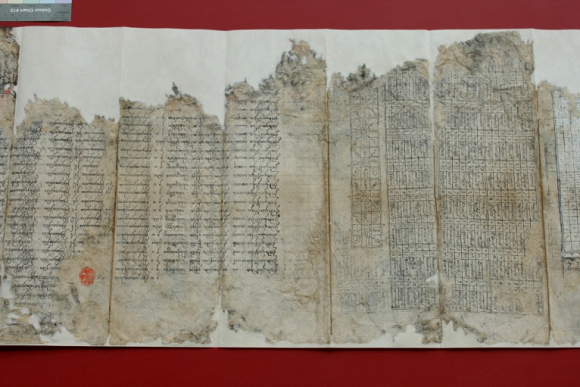 Fig.26 OR.3591 A section of Side B showing the extent of infills that were required.

Posted by BL Collection Care at 9:40 AM