Do more together than we can ourselves: The unique partnership between curator and conservator

curator, n. Traditionally, a curator or keeper of a cultural heritage institution (e.g. gallery, museum, library, or archive) is a content specialist charged with an institution's collections and involved with the interpretation of heritage material.

conservator, n. A person employed in the conservation of artefacts or sites of archaeological, historical, or cultural significance. Cf. conservation n. 1f.

The British Library is the custodian of thousands of manuscript treasures and it is a shared duty of its curators and conservators to care for and interpret them. I’m inviting you to share this meeting of minds and how it brings our collection to life through the rediscovery of a unique fourteenth century manuscript; Egerton MS 2516.

Once part of the library of bibliophile friar Leonardo Mansueti of Perugia (d.1480), this fragile selection of writings from Cicero and the famous African magician and philosopher Apuleius was brought to our conservation studio by curator Peter Toth for assessment and treatment advice.

The volume had been rebound in the nineteenth century in a style and design typical of the collection of Francis Henry Egerton. The very small script was written in iron gall ink on thin parchment to save money, and decoration was kept to a minimum. This book was destined to be a scholarly study text and it is an early and important manuscript of the works of the second-century Apuleius. 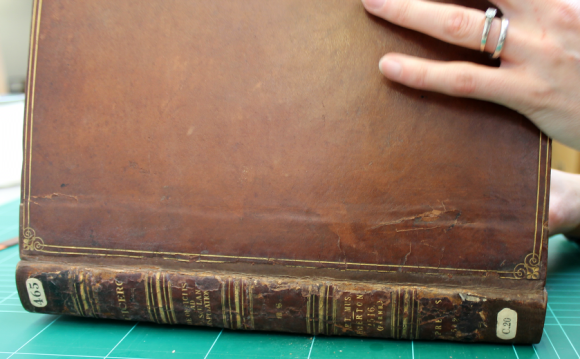 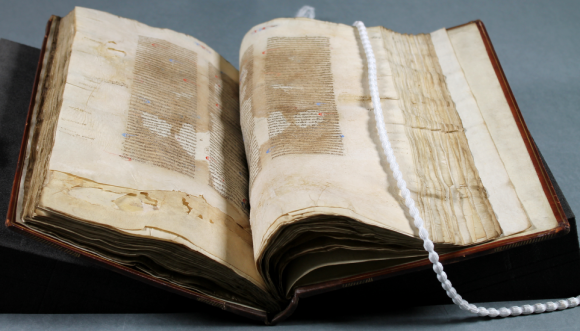 The tight opening of Egerton MS 2516.

Peter is able to read and interpret the ancient text and marginalia and to provide this crucial contextual and historical narrative. When he presented us with this book we could immediately see the problem. Its materials had aged so much that it couldn’t be opened beyond forty five degrees! It was so tight that we could not see the text in the gutter. The pages were fragmented, mutilated and corroded by the chemical action typical of this ink. Like leaf skeletons they were incredibly fragile and impossible to turn. 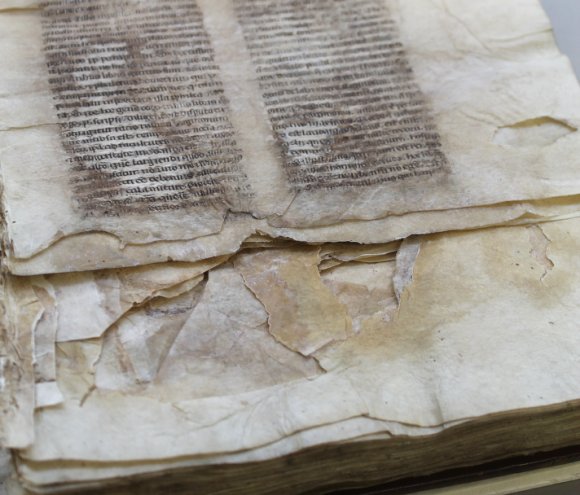 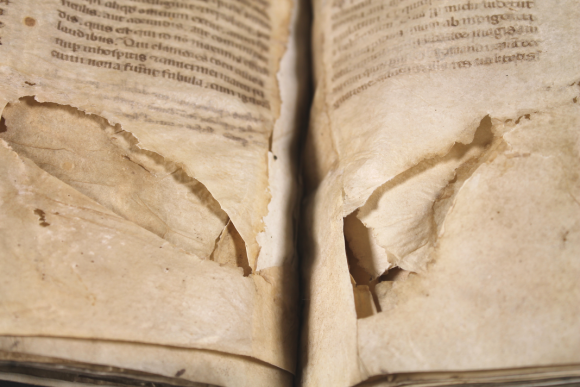 As conservators, our first sight and handling of an object can play like a movie of its life. We experience the ageing character and material signs of use and damage known so well of leather, parchment, threads and paper. Even the smells and stains, the cuts, marks and tears of a hundred scholars thumbing the pages are brought to life as we hold it in our hands. There were mysterious cuts to the tail of many folios, which suggested a purposeful extraction. Could this have been to remove mould, mistakes or secret text? Perhaps the parchment was stolen for love notes by a fifteenth century student?

The existing book boards with a gold crest and inscriptions are part of the unique provenance of this object, and yet the re-binding destroyed evidence of the manuscript’s original shape and sewing. Peter explained that its hard work as an academic ‘set text’ contributed to the patterns of deterioration we see today. We therefore tailored our treatments to preserve evidence of this damage and limit our repairs and intervention to safeguard the narrative. We created a new binding from calfskin replicating the Egerton tradition to respect this significant part of its history. 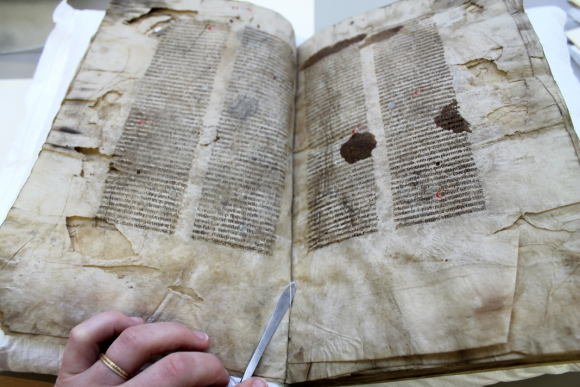 The old leather, glues and overcast sewing threads were painstakingly removed by parchment specialist intern Camille Thuet. Once the delicate folios had been released, medieval manuscript cataloguer Laure Miolo was able to access and identify hidden marginal notes. She found fifteenth and sixteenth century comments and a Greek quotation from Euripides which had been added by early readers of the text and reveal how it was used and interpreted.

With the help of conservation imaging scientist Christina Duffy, Camille analysed dark stains across areas of script which were speculated to be early attempts at revealing hidden text. Multi-spectral imaging was also useful in enhancing faded marginalia. 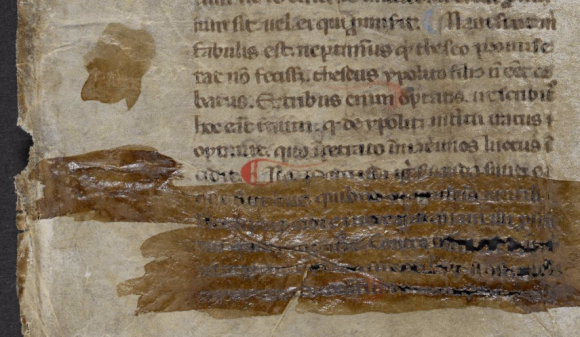 • Preserving and protecting historical evidence so that as much of the past is accessible to the future reader.

A new guard book structure means that the original parchment text block is protected from adhesive and the necessary mechanics of the binding’s spine. This allows every part of it to be viewed, and no part to be constricted. Parchment likes to breathe! 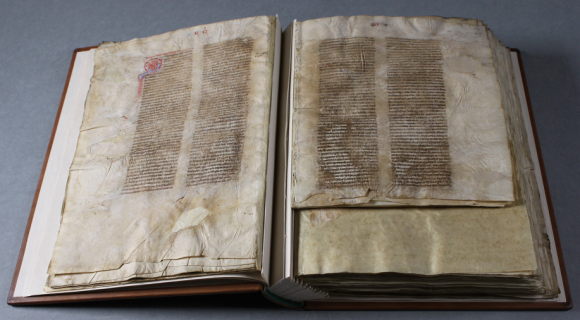 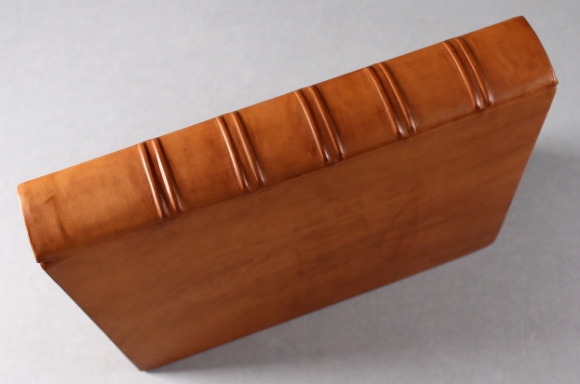 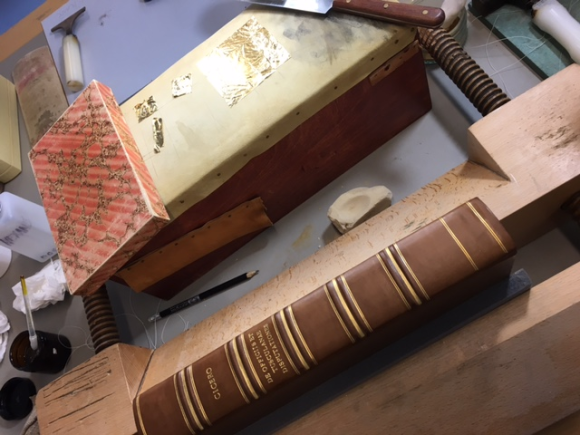 The books in our rich collection inspire both for the intellectual information they carry and as artefacts of craft. We were able to make complex conservation decisions to preserve this manuscript through collaboration with curators. We must together protect what our collection will represent in the future where respect for such treasured objects only grows in this changing digital age.

Thanks to Camille Thuet for her observant eye and parchment knowledge, and to Peter Toth, Andrea Clarke, and Laure Miolo for their historical expertise. The manuscript has now been restored and completely digitised and is available at the Library’s Digitised Manuscripts site here.

Posted by Christina Duffy at 1:56 PM