This blog post will discuss the conservation treatment of four silk theatre playbills and programmes, dating to the late 19th and early 20th century. Playbills like these were printed for special performances, such as the benefit, gala and state performances promoted here. Since they were intended to be sold at the theatre as souvenirs, they were not printed on the rough, cheaper paper generally used for this type of promotional material, but on a fine silk fabric that gave a soft textured sheen. Playbills like these were often also embellished with a delicate fringe, making them all the more desirable as mementos of the performance. The objects featured here are part of a collection consisting of six playbills and programmes;

Conservation of the paper programme (Tab.a.2.(6.)) and additional silk playbill (Tab.a.2.(2.)) from the collection is due to be completed following the reopening of the Library. 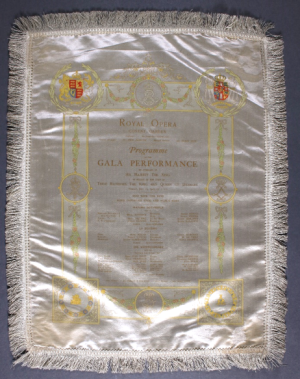 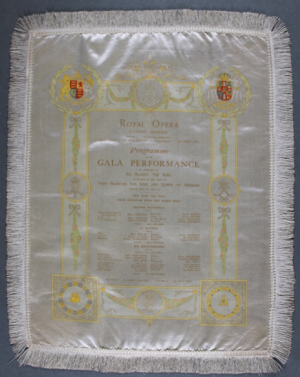 The playbills and programmes arrived in poor condition. They had been adhered into a customised guard volume which did not meet contemporary conservation standards, and was acting as an acidic environment, promoting degradation of the silk giving an overall yellow discolouration and brittleness. As well as the paper and cotton tape hinges from the current mounting, the 20th century programmes had been subjected to previous mounting which was evident due to patches of adhesive in the corners; this was causing discolouration and embrittlement to the silk and fringing. The 19th century playbill had additional paper repairs on the reverse causing the silk to embrittle and split.

The treatment planned was to remove the objects from this historic housing, reduce the acidity and adhesive staining, and develop a new storage solution allowing them to be safely accessed by readers. For the playbill with old paper repairs these needed to be removed, with new repairs introduced which were more sympathetic to the silk. 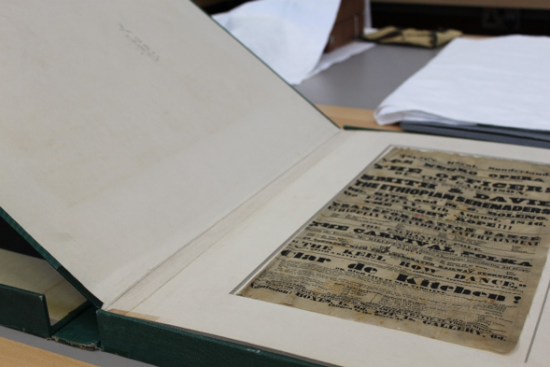 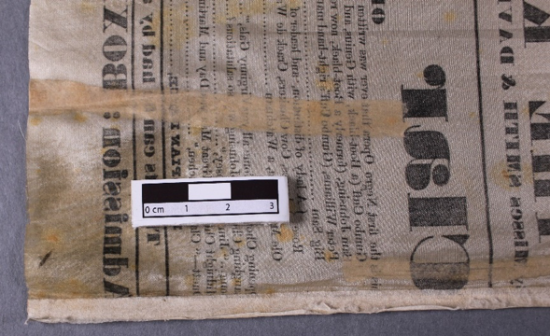 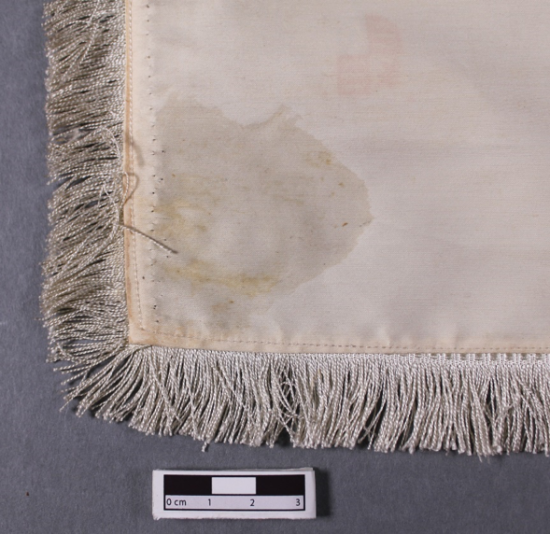 The playbills and programmes were first removed from their housing using a scalpel to cut the paper and cotton tape hinges that secured them in place. This allowed further examination and assessment of their condition, before speaking to curators about the proposed treatment.

It was decided that due to the acidity of the silk and the presence of what looked to be an animal glue adhesive, wet cleaning to reduce this would be the best course of action. In-situ wash-fastness tests were performed in order to understand how the colour of the printed design would respond to water, especially whether dye bleed may occur. Each colour was tested by exposing small areas of the playbills and programmes to blotting paper wetted with reverse osmosis water (a pure water which would not leave residues in the objects after washing) for around an hour. No colour bleed or transfer was seen in any of these tests and so wet cleaning went ahead. It was decided to wet clean the playbills and programmes in slightly warm water in order to help solubilise the adhesive, with soft sponges and brushes used to aid in removal. The water was changed regularly to prevent the adhesive solubilising into the rest of the textile. The fabric and paper hinges and paper repairs were able to be removed as part of the wet cleaning process. Following wet cleaning, any fringing was aligned and the objects were dried under slight weight to prevent dimensional change and creasing. 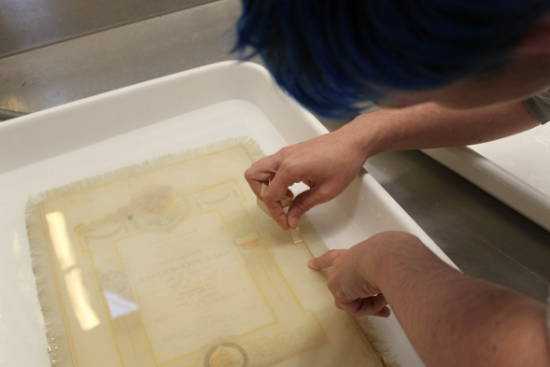 Wet cleaning was incredibly successful, the adhesive staining, overall yellowing and acidity was reduced, enhancing not only aesthetics but the longevity of the objects. For the 19th century playbill where paper repairs had been removed however, there were now numerous unsupported holes and areas of weakness. In order to support the playbill an overall support of silk crêpeline, dyed to match the colour of the playbill and backed with conservation grade adhesive, was used. The weave of the support was aligned to the weave of the object to provide strength, and a heated spatula was used to reactivate the adhesive, securing the support to the object. 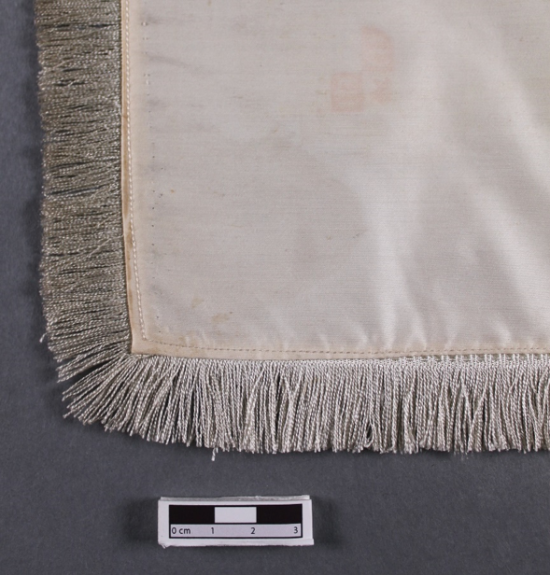 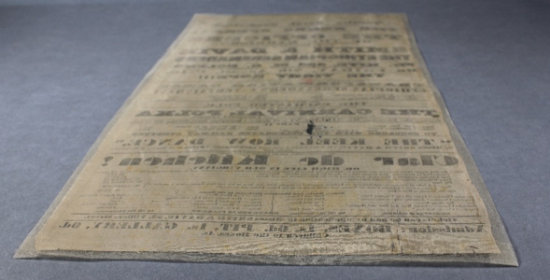 Finally, the objects were secured to custom made padded boards; unlike the original storage method these were made from acid free materials.  To negate the need for stitching into the objects in order to secure them to the boards, the three fringed 20th century programmes were secured using nylon net tabs at the corners. Due to its increased fragility a more robust solution was needed for the 19th century playbill. Strips of adhesive cast silk crêpeline were adhered to the front edges of the playbill in order to sandwich the object between these and the support. The silk crêpeline was extended to just beyond the edges of the playbill, allowing this to be stitched into to secure the object to the board. These new boards fully surround and support the playbills so that each can now be separately lifted from a custom made box which will be created for their storage, without the need to touch the fabric surface at all. This improved handling platform allows the playbills to be made available to readers in the Rare Books Reading Room of the Library, according to their research needs. Handling instructions will also be made to accompany the objects to the reading room to ensure their safety. 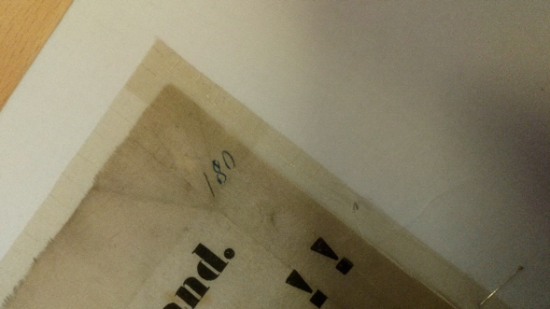 The remaining playbill is in the worst condition. The silk is incredibly brittle and yellowed, with a multitude of adhesive stains and paper repairs to the lining, and a large amount of structural damage to the silk. Conservation of this playbill will continue following return to the Library, and will hopefully be the feature of a future post. 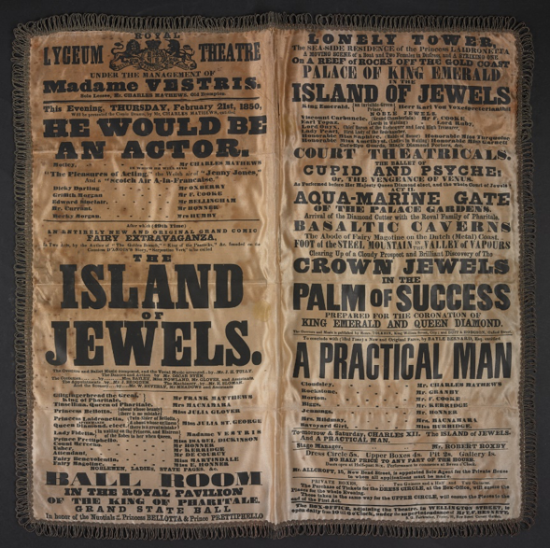 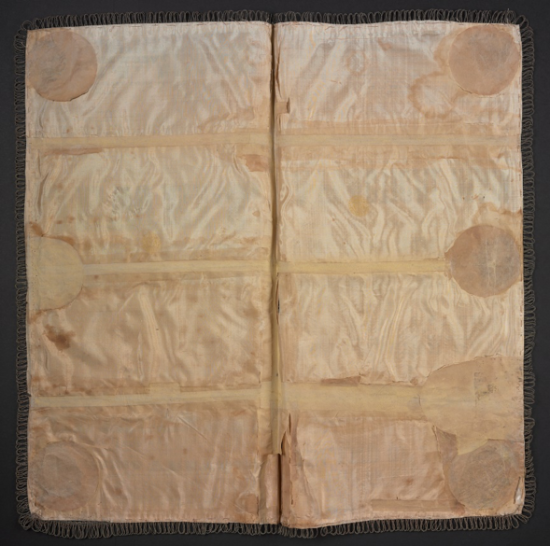 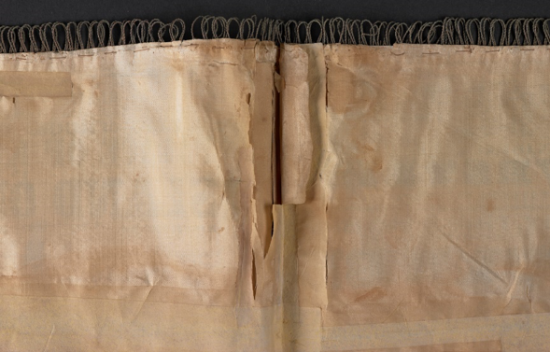 Posted by BL Collection Care at 11:19 AM